A trip to Caye Caulker, again with Seaduced Tours on the catamaran and another beautiful day.  One problem with sailing on Mondays: Rainbow Restaurant (my favorite place…see previous Caye Caulker post) is closed.  So we decided either Pedro’s Pizza/Inn Caye Caulker (which I’ve tried once before and is very good) or Paradiso Sandwich Shop.  I wanted something new and I’ve walked past the sandwich shop a bunch of times.  Decision made.

Paradiso is about halfway between the Water Taxi stop and the Split.  The Split is the cut in our sister island caused by the MAJOR hurricane Hattie in 1961 and home to the best swimming and most popular bar on the island, the Lazy Lizard.

Quick interesting facts about Hurricane Hattie:  She reached land on Halloween, 1961 as a Category 5 storm (sustained winds of 150mph and gusts up to 200mph…oh my).  Landfall was just south of Belize City after most of the capital city (which is mostly below or at sea level) was evacuated or moved to shelters.  Hattie damaged Belize City so badly that the capital was permanently moved inland to the current capital, Belmopan.  There were 307 deaths reported in Belize (then called British Honduras).

1931 was the BIG ONE for Belize and the #18th deadliest hurricane ever in the Atantic.  Unnamed, this hurricane was a Category 3 and hit on a national holiday (Sept 10, St. George’s Caye Day).  Approximately 2500 were reported dead and it was the biggest natural disaster ever to hit Belize.

Let’s switch subjects abruptly…the sandwich shop is very cute inside and out and has a good seating area in a side yard. 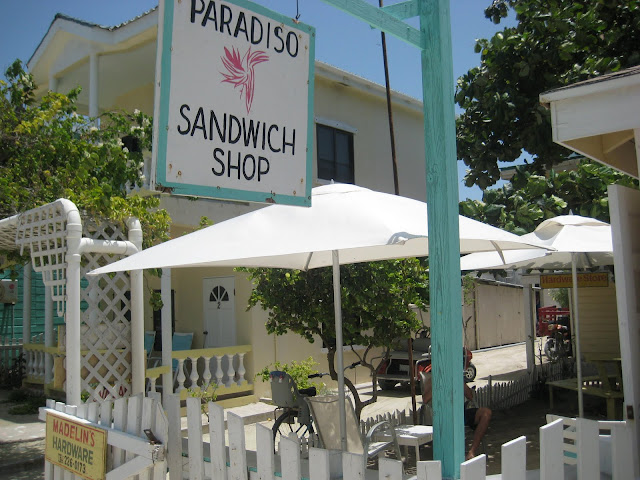 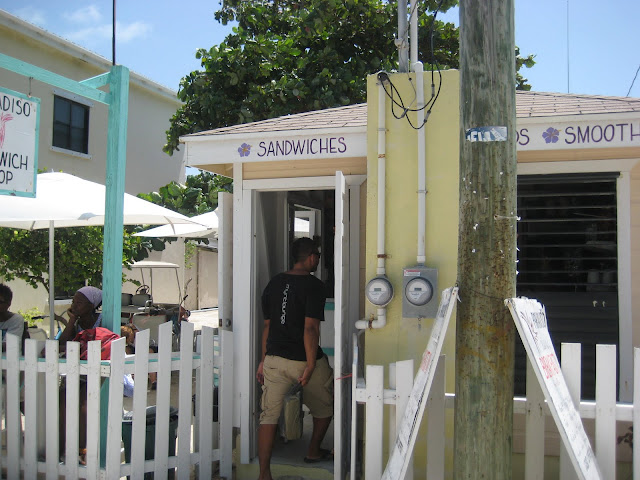 Here is the menu inside.  They do a very popular breakfast and also lunch.  You can get fresh juices, smoothies, beer or soda. 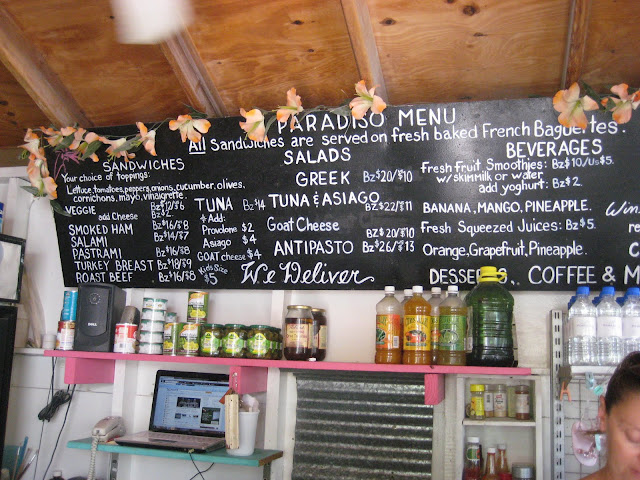 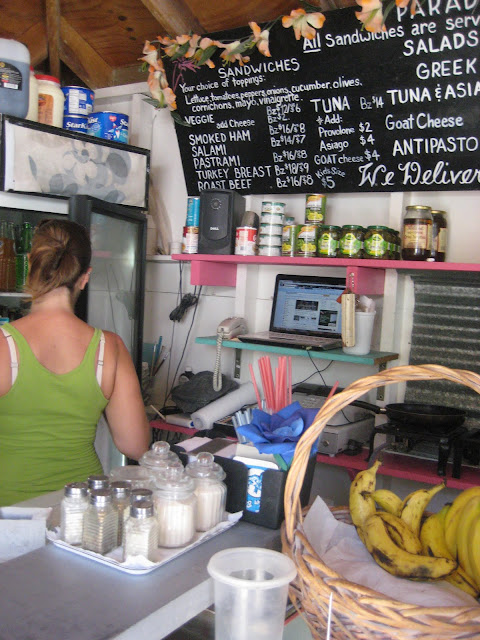 The sandwiches (a BLT and a turkey with provolone) were delicious and on great bread…but expensive.   My turkey was packed…lettuce, tomato, red onion, cornachons, banana peppers, provolone…it was really tasty.  And for me, $20bzd was worth it (it was SO hot and a nice cold sandwich hit the spot)…but I think others might disagree.  Particularly with no sides. 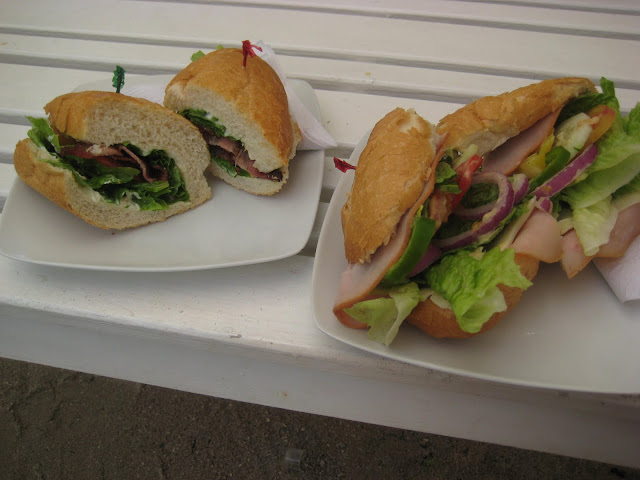 After lunch, we were so friggin’ hot that we went for a 3 minute walk around the block (to the lagoon side of the island) and headed quickly back to the boat for a swim.  Here is what I saw.
I love seeing a Humane Society anywhere.  I didn’t even know that Caye Caulker had one.  It didn’t appear to be open when I went by (probaby lunch) but here is a picture. 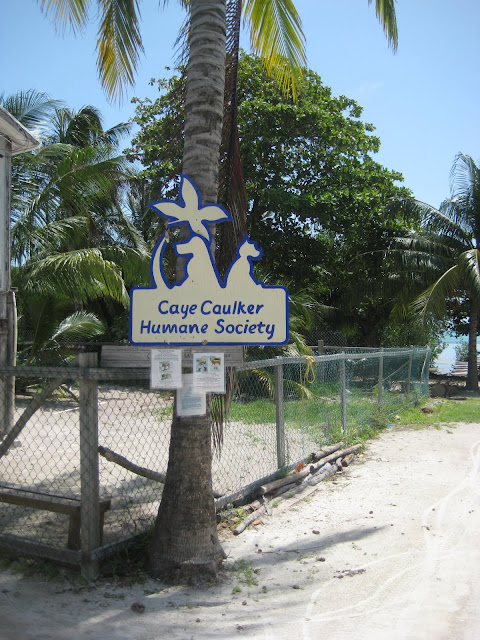 A peek thru the mangroves on the back side of the island. 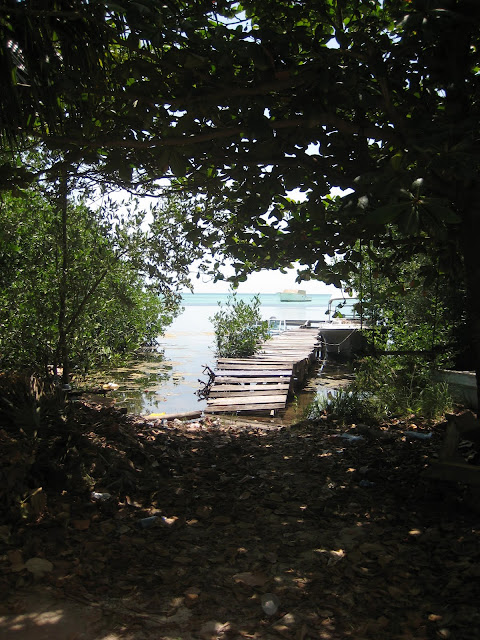 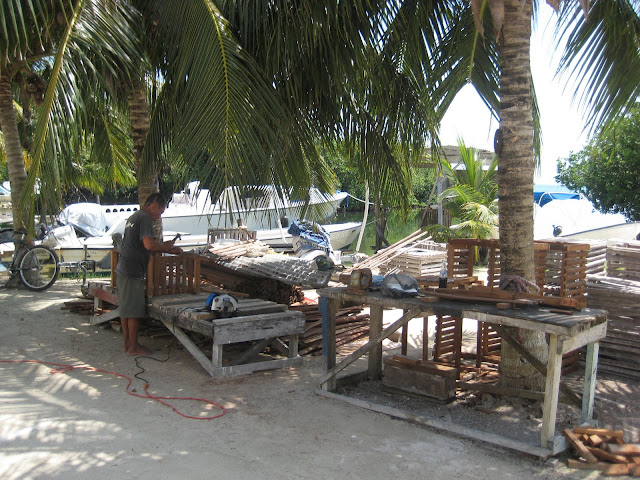 Interesting signs in Caye Caulker.  A sign stating that garbage dumping will cause you to be dealt with to the full extent of the littering act.  The sign is stuck in a pile of garbage. 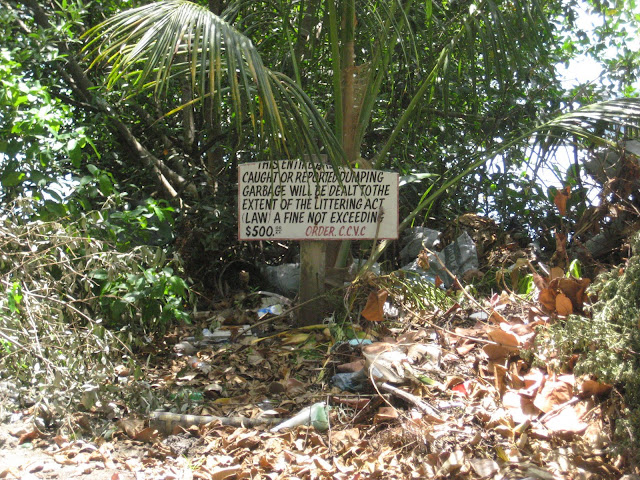 And I always like this sign in Caye Caulker.  What else is there to do on this tiny island other than loitering? 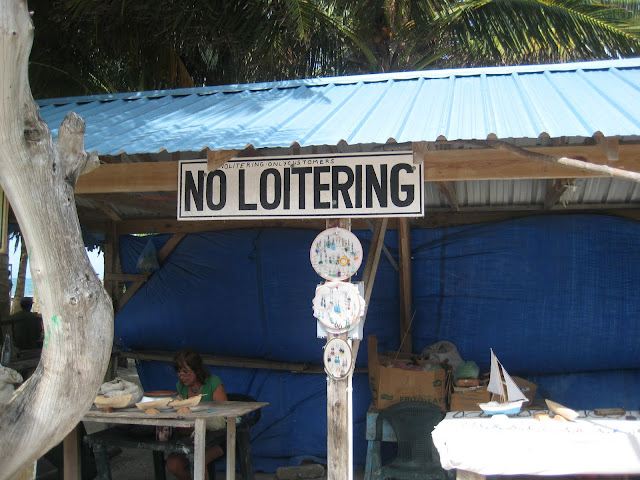