The Chicken Drop at Wahoo’s Lounge (right in the center of town) is the most popular organized tourist event on the island.  Bar none.  But it is generally not an event that locals would EVER go to unless they had visitors or unless they are trying to sell something to tourists.  It is packed. 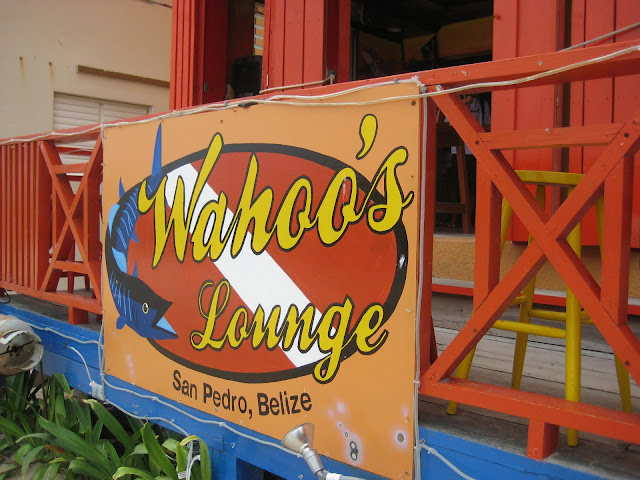 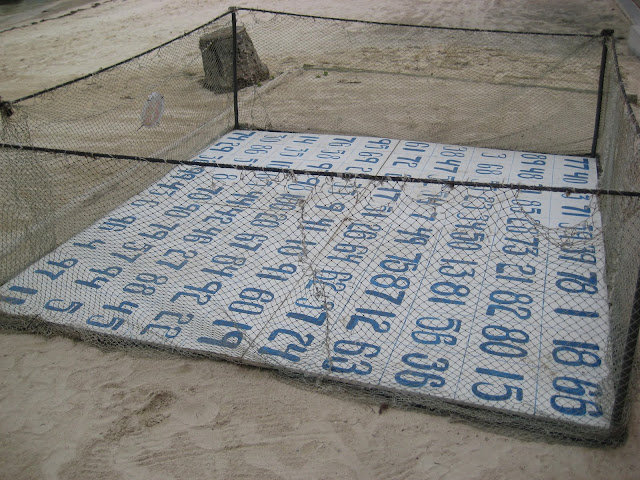 At 7pm…and then numerous times after, a chicken is brought out by “Chicken Security”.  (These t-shirts are for sale and very popular.  Not surprising with the shortage of cute t-shirts on this island). 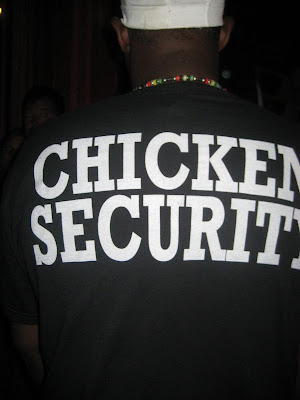 The chicken is then spun around (almost always by a drunk female tourist) and shaken a few times.  The woman then blows in his butt (no lip contact) and places the chicken on the board. 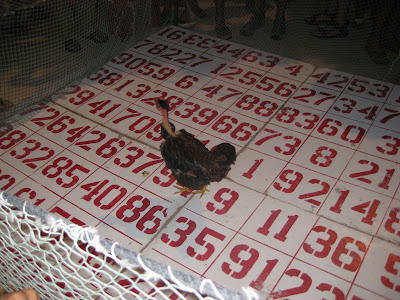 The chicken then wanders around looking shell shocked and hopefully poops on a number. The winning ticket gets $100bzd.  Sometimes the chickens (though usually very tough looking roosters) get stage fright and you can be waiting for a while.

The betting starts at 6pm.  We arrived at 6.30pm and the line was LONG. 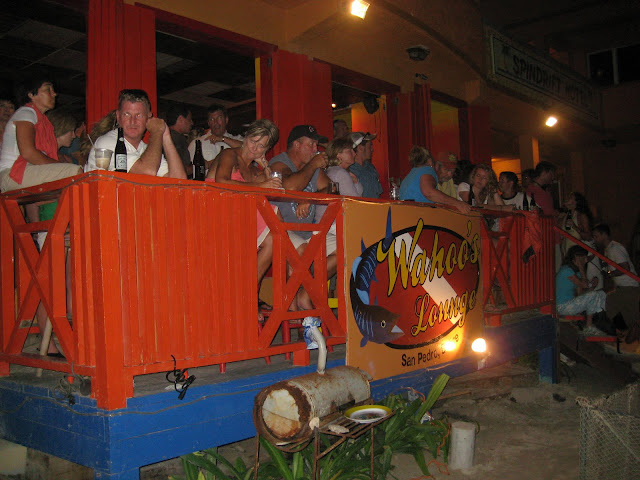 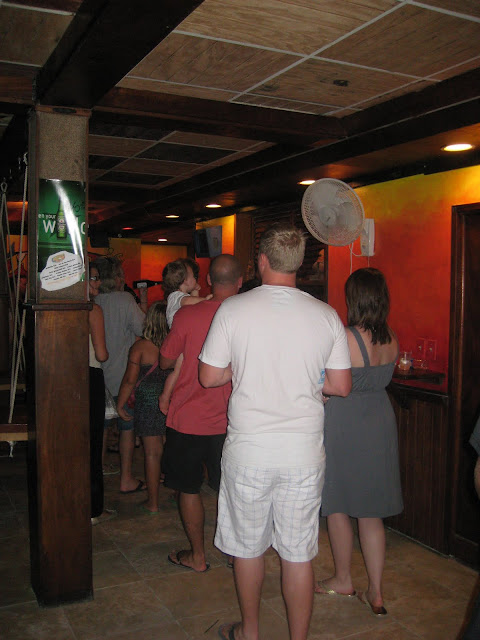 They had sold out the first 5 or 6 drops and were taking bets for the 9pm drop.  Screw that.  So we bought a bunch of drinks at the outside bar, asked the bartender to keep them coming and settled in to watch the band. 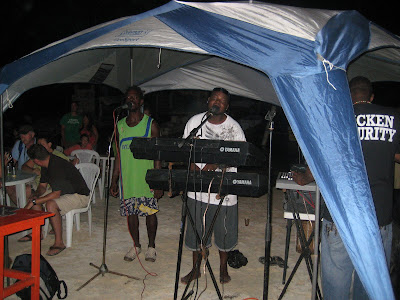 Same band as Crazy Canuck’s on Monday, it is Barrington and the Islanders singing a mix of Bob Marley/popular reggae and some original island hits like “Swipe the Card Gal” (women were asked to raise their hands if they make their own money) and “Sexy Chicken”.  They were really good and gave the event a much needed boost.  It used to be almost torturous and slow moving (sorry Dennis Wolfe) but local reggae and punta music made the event 100x better.  I might even return.

We ran into Faya Link (a local artist) who was selling his new CD (Fayalusion or Fayalicious…something like that).  He even had head phones for listening.  (And make sure you do listen, last album we bought was blank). 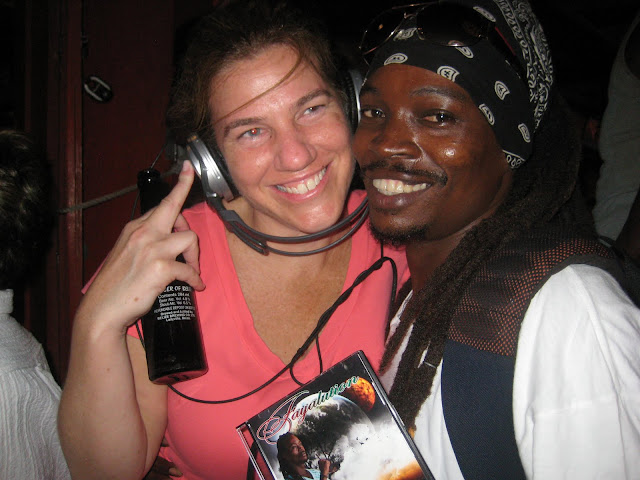 And off course we ran into Miss Carole (a fixture at almost all night time events on the island). 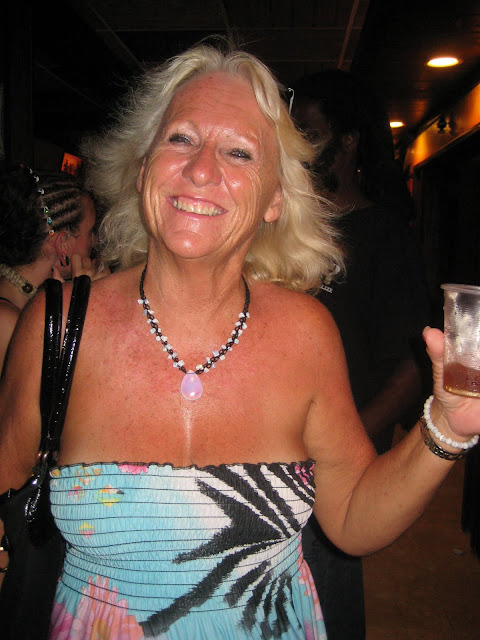 This rooster really freaked me out.  Elephantitis of the foot?  It had about 15 snaggle toes. 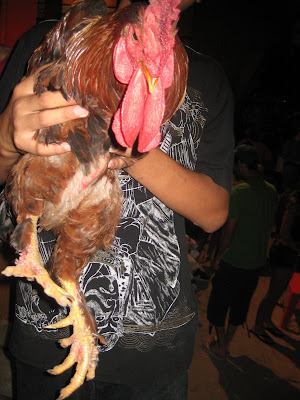 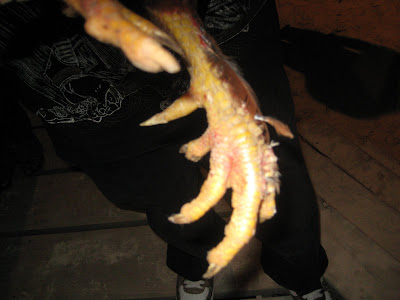 We didn’t leave until about 9.30pm…headed over to Waraguma on Middle Street for pupusas.  If you are drunk and hungry, this is the spot.  SO GOOD.

Jamie even ran into the police in their camo and machine guns patrolling Middle Street.  We wanted a group shot but their leader explained that can get in trouble for photos on the internet.  There were all business.  Whoops.  Sorry guys.  I promise I won’t tell. 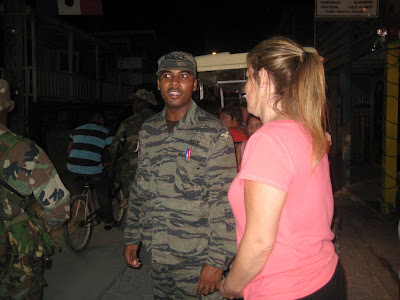 Word on the street is they had a record breaking number of drops.  10.  Look at that crowd. 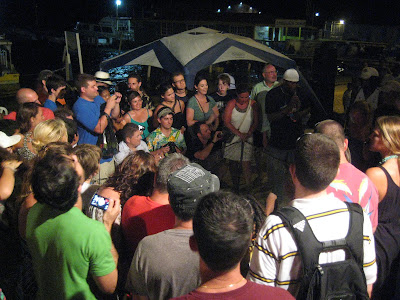 1 thought on “Thursday Night at the Chicken Drop”