An exception to the rule (rule:  all travel in Central America is incredibly slow or expensive) is Mexico.  They have such a great bus system that is very, very reasonably priced.  You also have a bunch of options when reaching Mexico from San Pedro.

The kick-off point to any Mexican adventure is always Chetumal, the capital of Qunitana Roo and a 5-6 hour bus ride south of Cancun.  Chetumal is northern Belize’s closest city, only a few miles from Corozal.  Fastest and most expensive transport from San Pedro:  You can fly from San Pedro to Corozal (for about $95 usd round trip) and then take a taxi or bus across the border.  Or cheapest and still quite easy, you can take the water taxi directly to Chetumal ($60usd round trip) and save yourself some money crossing the border if you are not a Belizean resident.  Crossing at the border via taxi or bus, you must pay $37.50bzd, using the boat, your fee is only $9bzd.  A big savings.

Almost three years ago, I decided to meet my little brother in Merida, Mexico.  I knew he is not totally a beach person and this seemed like the perfect option.  Culture, good food, cheap living, great art, lots of cool day trips and a big expat population…and it would be easy and cheap for him to fly to Cancun and meet me there.

Quick Merida:  Founded in 1542 by a Spanish conquistador on an old Mayan City, Merida has one of the largest centro historico areas in the Americas (only surpassed by Mexico City and Havana).  It is gorgeous and packed with history and culture.   It contains the oldest cathedral in the Americas and for a brief period at the turn of the 20th century, due to production of agave, it was said to contain more millionaire than any other city in the world!  Thanks Wikipedia.  This is good stuff.  Why hasn’t everyone visited? 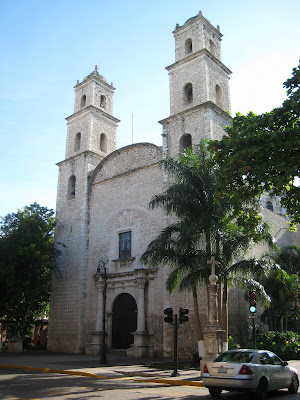 So I flew over, took a taxi to Chetumal (the water taxi wasn’t running 3 years ago!) and took a 5.5 hour bus ride north to Merida.  Brother Ryan flew to Cancun and took at 3+ hour bus ride to meet me.  Easy.  The buses in Mexico are actually nicer than buses in the US.  Fully airconditioned, huge, new with comfy seats.  Make sure to bring a sweat shirt…these Mexican drivers like to keep it COOL.  Earphones wouldn’t hurt…they love to BLAST the sound on the Mexican kids movies that they show.

We met at the bed and breakfast and it really couldn’t have been nicer.  About 5 or 6 blocks outside the old city, Cascadas de Merida is gorgeous. (http://www.cascadasdemerida.com/)  You step into what looks like an old concrete colonial home and find a little oasis.  The tiny pool was perfect and the big bright rooms were all around it.  We spent a few days exploring the city.  Merida really looks like parts of Spain. 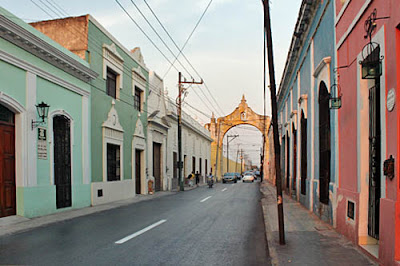 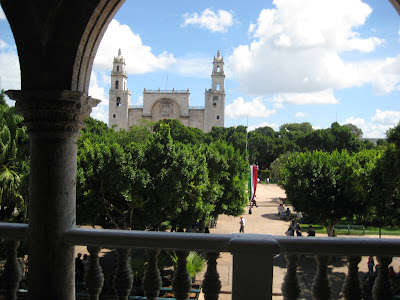 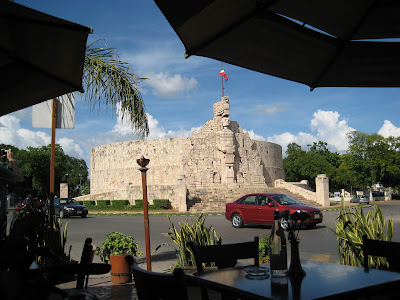 After two nights at the bed and breakfast, we moved to our next hotel.   NO, there was no problem with the first B&B, I just like to try a few different places when I go to a new city.  Luz En Yucatan (http://www.luzenyucatan.com/) was equally impressive.  Bigger, with a larger pool, it was more of small hotel and the owner was equally friendly.  In fact, I can’t think of which I’d choose in Merida.  I think I could stay at both again.

We rented a car for a few days (CHEAP!  It was about $25usd a day) and drove to Uxmal (pronounced Oosh-mahl) about 2 hours away.  Very impressive, large and beautifully restored Mayan ruins. 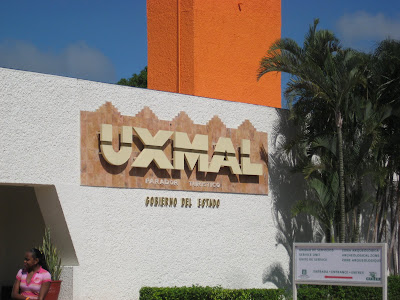 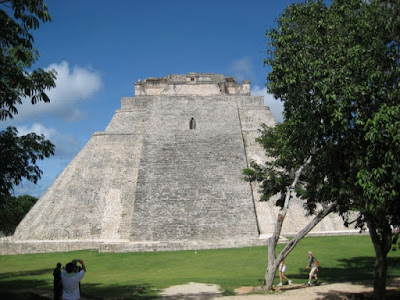 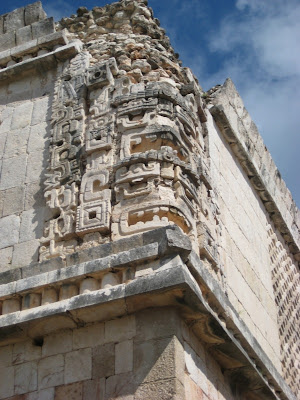 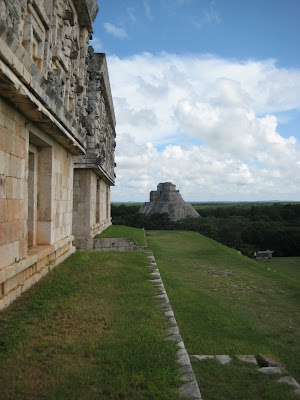 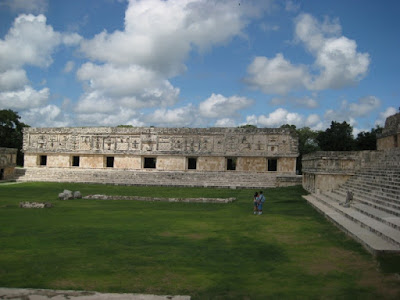 The owner of the hotel also gave us a hand drawing of a cenote off the beaten path.  He described a long dirt road thru a field and a cenote where we would be the only ones there.  He wasn’t lying.  It scary and was awesome. 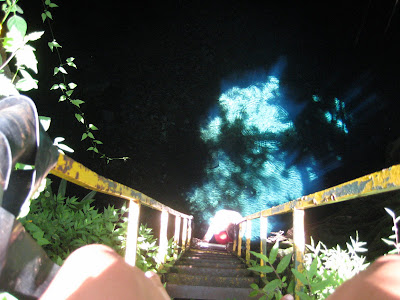 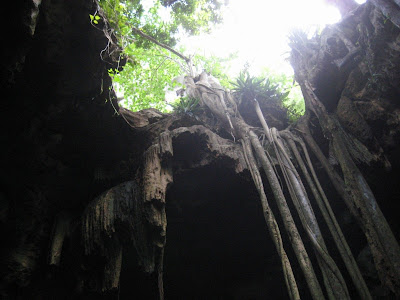 The water is crazy crystal freezing and clear.  That is not a rare Albino Mexican frog, that is my brother. 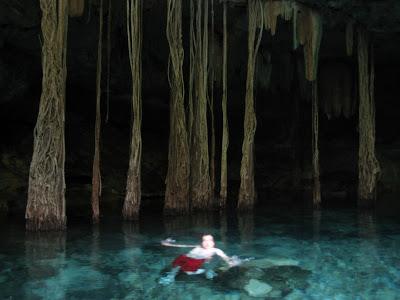 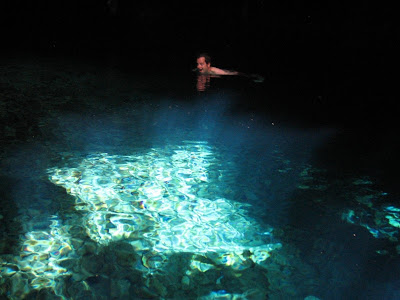 Go stay at this hotel just to get the secret location of this incredible cenote.  We stopped at a few cenotes around the Yucatan but this was BY FAR the most beautiful.

We went on a flamingo viewing day trip to Celestun.  (Good but not great) 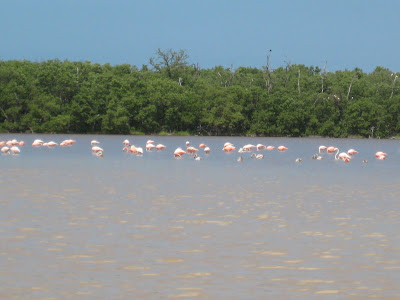 And drove out to the coast along the Gulf of Mexico to a popular local beach at Chelem.  It was deserted in October.  Not Caribbean beautiful, but very nice. 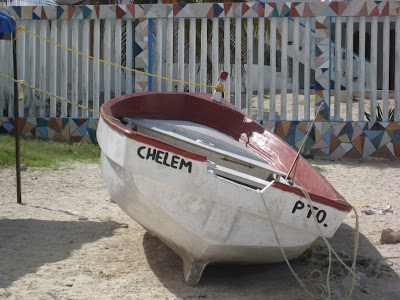 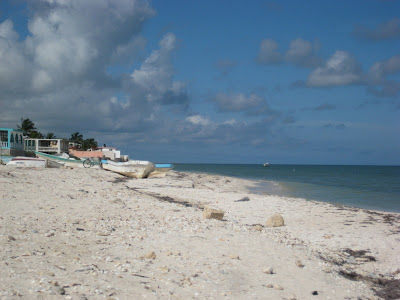 After leaving Merida, we both went to Cancun for a few nights.  Cancun is…well Cancun.  Crowded and commercial. But you can not fault them for the beaches.  They are always stunning…you really can’t go wrong. 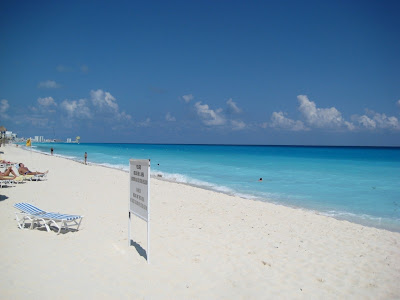 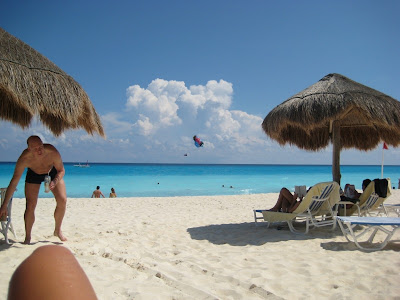 We even took the bus into the city to attend a soccer/football match for Cancun’s pro team.  It was very interesting…and we might have been the only tourists there. 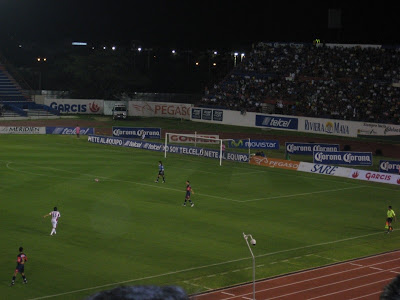 Bottom line?  I would go back to Merida in a heart beat.  Love it.