When I first moved to San Pedro, I pictured myself flitting about Central America a few times a year.  Bocas de Toros, Panama maybe.  Surfing in Costa Rica, why not?   Nicaragua’s Corn Islands one week…maybe Lake Atitlan, Guatemala few months later.  Little did I know…

Travelling quickly and cheaply from Belize and around Central America is almost an impossibility unless you are going to Chetumal, Mexico (our nearest neighbor but not exactly a tourist mecca).  I have been quite a few times.  Always for the day and always for shopping or even just a Big Mac (shame on me).

Over almost five years, I have been to (in order) Tikal and Santa Elena, Guatemala; Roatan, Honduras; Merida, Mexico and Cancun; Tulum (a few times) and Playa Del Carmen.

Let me run down each of them briefly, what I saw and how I got there and back.

Tikal and Santa Elena in Guatemala.

Tikal is one of the largest Mayan sites anywhere and a UNESCO World Heritage site.

Flores and Santa Elena are sister cities on Lake Peten Itza.  Flores is bigger and seemed more industrial.  Santa Elena is more quaint and right on a little island/peninsula on the very pretty lake.ï»¿
About an hour away from Santa Elena by taxi is Tikal.   The park is extensive and winds through the jungle.  Get one of the many private guides that are lined up when you get to the entrance. (And make sure you bring some bottled water…it’s hot).  I’m not sure how much it was for the day, but it wasn’t expensive and if you don’t have one, you could wander these grounds for days.  The place is huge.  Here are some pictures…we walked for about 4 hours around the area.
The huge Ceiba tree near the entrance.  It’s the national tree of Guatamala…I’m not a good judge of height but this thing has to be hundreds of feet high. 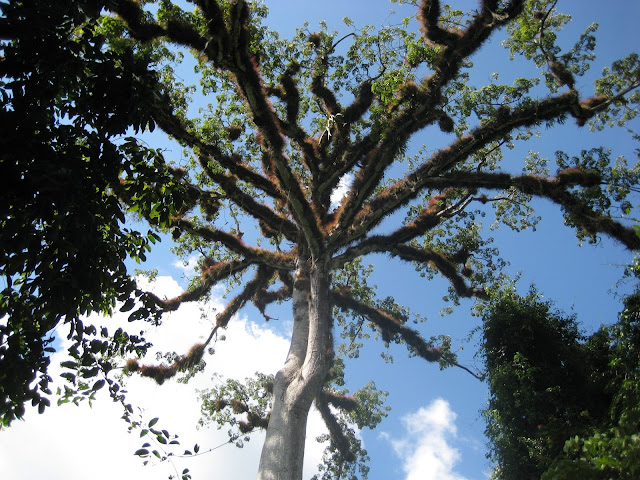 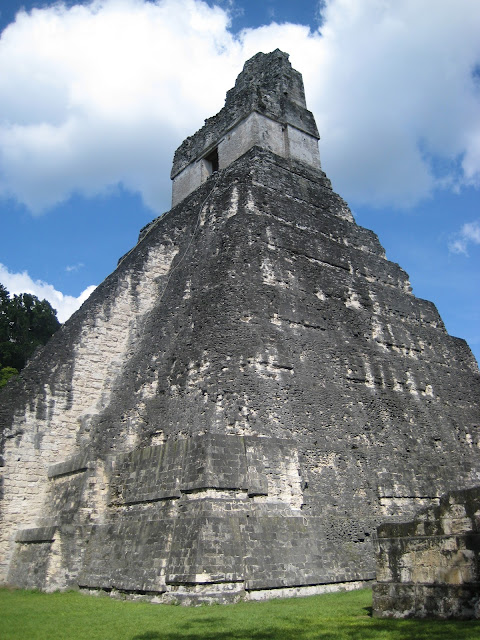 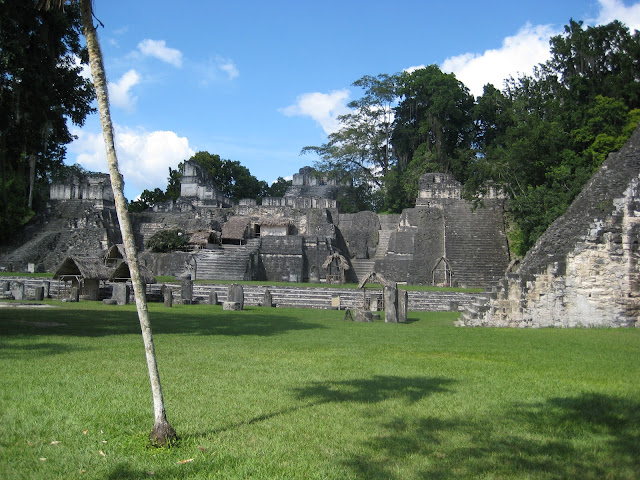 There are also some HUGE pyramids that have yet to be uncovered completely…it’s quite a climb to the top of the big one but totally worth it.
We returned to Santa Elena (where we were staying at the Hotel Casona De La Isla – great location, good lake view from the patio, very basic rooms with industrial tiling on the floor and neon lights and CHEAP), went out for dinner and wandered the cobble stone streets.  It’s not a town to spend days and days.  You can pretty much see the town in one…easily.  But I have heard there are lots of things to do at the lake at some eco-lodges.  Francis Ford Coppola even owns one on the lake…La Lancha.   Would have been nice if I had more time (and some more money).
But, I was returning to San Pedro the following day and found out that Tropic had cancelled flights to and from Guatemala…some sort of disagreement…so it was an EARLY morning bus for me back to Belize City. (Flights are fully running again…and have been for some time.) I made the reservation for the bus with the hotel, paid my $22usd and was picked up at some frightful hour.  Maybe 4.45am?
The road in Guatemala was horrible…bumpy dirt road.  In an old, refurbished school bus from the states circa 1970 something.  It takes about 2 slow hours to get to the Belize border, immigration is fairly quick and then it’s another 3ish to Belize City and to the water taxi (or plane).  The windows are all wide open to keep the passengers cool.  Be ready to eat quite a few bugs and lots of dust.   I don’t love the bus in Belize but I guess it could have been worse.
A great trip.  But my recommendation would be to spend a few days in Western Belize – the Cayo area when you visit Belize.  I’d stay at a hotel in or around San Ignacio and do a few different things.  Maybe a day trip to Tikal, you can do cave tubing and ziplining.  Enjoy the area.  Take your time.  It’s a totally different scene than San Pedro.  And it would also save you a bunch of money travelling back and forth.
Next stop…Roatan, Honduras

2 thoughts on “Trips Taken Outside of Belize…Part One, Tikal and Santa Elena, Guatemala”