Home » Belize Travel Blog » Island Fun » Sunday Afternoon In San Pedro: Crazy Canuck’s and Average Joe’s
Boy was I wrong with my weather forecast.  I called for sunny and beautiful…instead it was coolish, grey and it poured rain in the afternoon.  I headed over to Crazy Canuck’s.  (The Best Bar in San Pedro according to one renowned blogger http://www.sanpedroscoop.com/2011/09/best-bars-in-san-pedro.html)

When it is a bit busier, there is always a band and BBQ on Sundays.  Not today.  But you can always count on seeing a decent sized gringo crowd.

Here are some of the Crazy Canuck Characters I encountered.

Tim & Pamela.  She is famous on the island for walking the beach each afternoon selling banana nut bread.  If you’ve been to San Pedro, you know her. 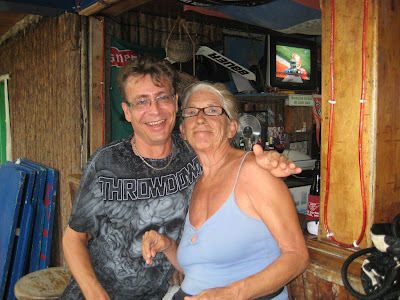 Pirate…yes, that is the only name he’s ever given me. 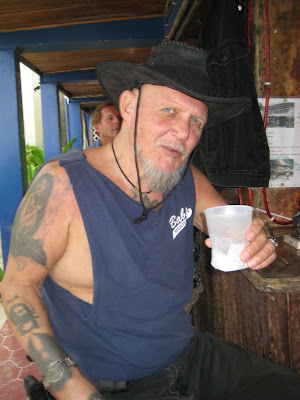 There is always a heated horseshoe tournament.  Though with the weather and smaller crowd, it was a bit more tame.  Here are Fritz (owner of Crazy Canuck’s) and Jimmy (the manager with his wife Crystal of Banana Beach). 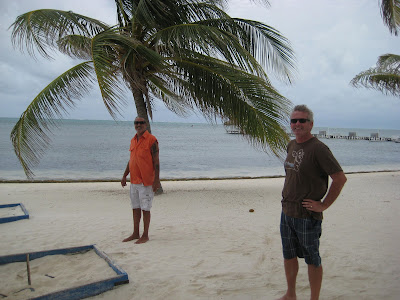 Rasta Trevor stopped in for a beer.  He’s one of the first people I met when I initially vacationed on the island.  Not a gringo, but certainly a character. 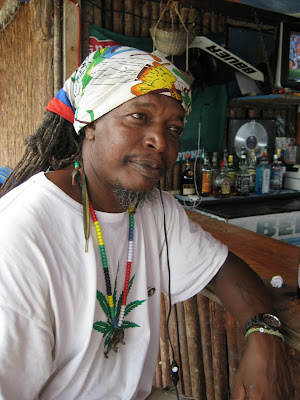 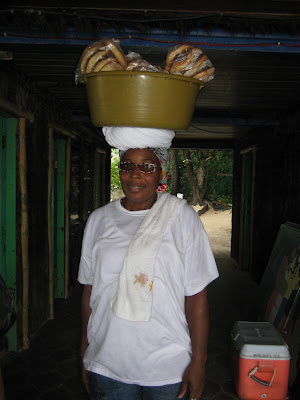 Canuck’s claims to have the coldest beers on the island…and they serve your beer in a koozie so you can keep it that way.  In case you were wondering, “koozie” is one of my least favorite words ever.  What does it even mean?  Cozy makes some sense but koozie? 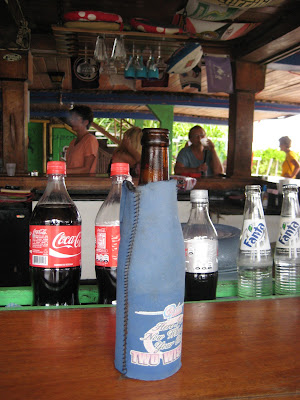 A local way of getting rid of flies is hanging bags of clear water from the ceiling.  Apparently the flies land on it, see themselves and are scared off by the bigger fly.  Well I guess no one ever accused a fly of being too bright. 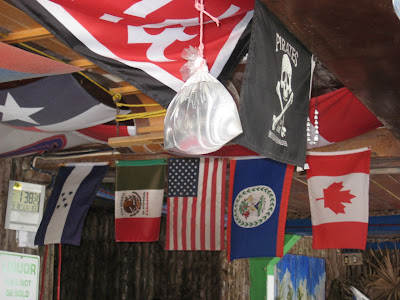 And then it started to pour rain… 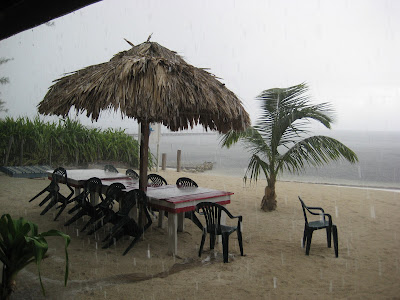 So I headed right around the corner to a relatively new bar in San Pedro called Average Joe’s.  It not a new location at all.  It is south of town around the bend from Coconut’s right before the gas station.  When I first moved here, it was a shady brothel-like bar called The Thirsty Tiger, then it was totally refurbished as Blackbeard’s Hideout and now renovated as Average Joe’s.  They have put quite a bit of money and time into it.  My former co-worker Kevin now bartends there.
It’s hard to see him there.  It’s probably the tallest actual bar with the tallest stools I’ve ever seen.  Very challenging after 3 or 4 beers. 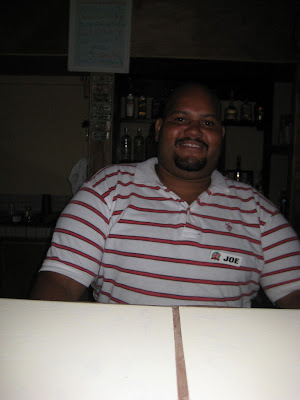 Walter and Carrie from Pedro’s Inn showed up from a day of drinking and sailing.  Walter is sporting his Jagermeister bathing suit.  Carrie is obviously admiring it. 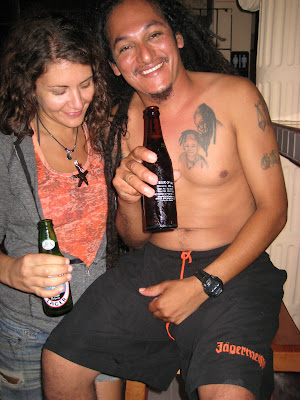 And after those aforementioned beers, what better snack than a hot dog?  Beef hot dogs were unknown on this island just a few months ago (all are either chicken or turkey…blech), but these guys import some DELICIOUS hot dogs.  They do a pretty simple menu (and Kevin was preparing the food as well as serving the drinks).  Hot dogs with fixings like chili, fries and wings.  (Kevin used to make the wings at Tacklebox so I can only assume that they are great).  Let me tell you, this hot dog is worth stopping by for. 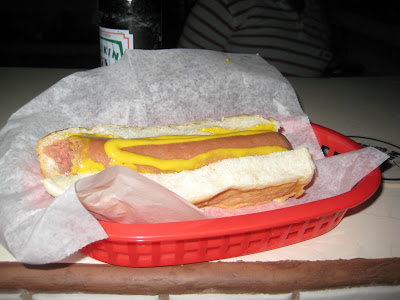