About a month ago, I was given the recipe to make Belizean chicken soup by Marina’s Store and, not to brag, but since then, I have mastered it.  I make the best chicken soup in the world.  Your mom?  Second rate.  Your yiddish great grandma that made it for you when you were 6 years old?  Not that good.  MINE is the best.

I’ve been making it with cilantro rice at least once a week.  It feeds you for at least 6-8 meals and I never get sick of it.  If you want my SUPERIOR chicken soup recipe, check out:  I’m No Cook But I Can Try…

Soup is easy.  You can’t burn it.  It’s always good.  So let’s branch out to Beef Soup.  Same procedure basically, but with a few twists and definitely more time.  Here are my basic ingredients.   From left to right:  2 onions, 3 potatoes, 1 habanero, 4 carrots, 2 cho-cho, 2 bags of fresh cilantro, garlic and 2 lbs of stew beef.  In front is some powdered beef consomme.  It is the packet with the smiling cartoon cow sipping a bowl of soup.  This picture was obviously taken before he learned that he would be ground up to make the soup. 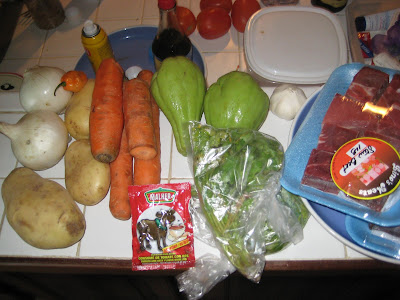 I have never used “stew beef” before and when you open the packages, it ain’t pretty.  No filet mignon.  Kinda grizzly with bone pieces…some with the tough outer skin still there.  It needs a little trimming (though leave the bones in…they fall out during cooking).  And I am guessing that since it is tough like leather, it’s going to need require a bit of simmering.

My plan?  Brown the beef.  Add 6-8 cups of water and just let it go until chewable.  This could take a while.

I added a packet of the consomme and about 15 minutes later skimmed off the icky looking foam that was on top of the pot.  Foam gone, I added 4 cloves of garlic, the whole habanero (BEWARE:  DO NOT CUT IT) and the cilantro steams, chopped.  The stems have just as much flavor.  I like to let them slow cook and then add the fresh chopped leaves near the end. 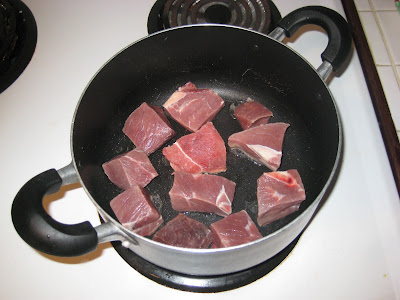 It sounds like I know what I’m talking about, eh?

If you are not in Belize, you may be asking “What’s chocho”?  You didn’t think I’d leave you hanging on that one, did you?

Chocho seems to have 100 different names (chocho – Jamaica & Belize, chayote – Mexico, christophine – France, sayote – Phillippines…the list goes on) and is native to Mexico and Central America.  It’s part of the gourd, squash, cucumber family.  You usually don’t cook it too much so it doesn’t get smushy.  And I think it taste a bit like a cucumber and maybe a zucchini. 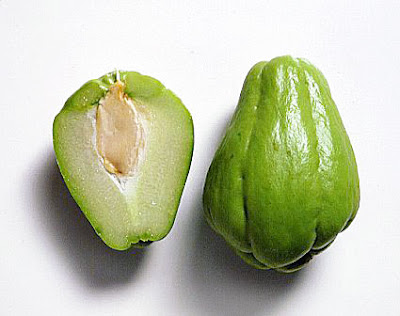 If you leave it out or use celery or any vegetable you like, you’ll be more than fine.

So…the beef cooked for about an hour and a half and seemed ready.  Time to add my vegetables (minus the chocho). 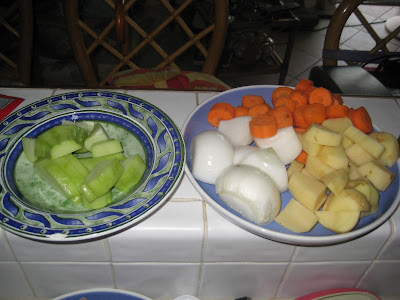 Cook for 15 more minutes.  Add chocho and chopped cilantro.  Cook 10 minutes and you’re done.  So many veg, it was almost a stew.  Add some fresh white rice and Bon Appetit. 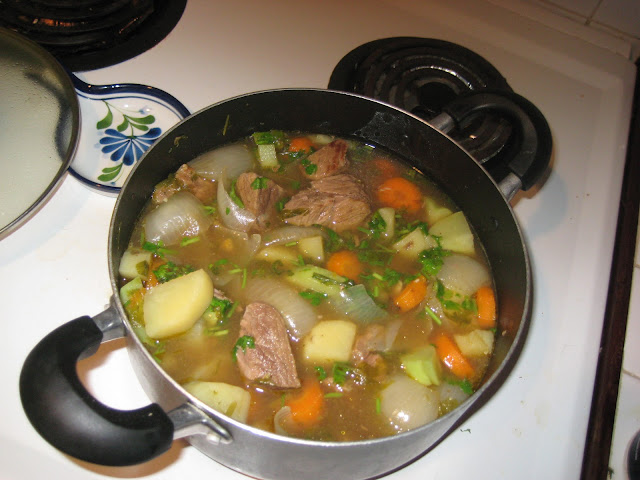 Only changes I would make:  cook the beef longer than an hour and a half.  It was a bit tough…like pot roast.  Cook the crap out of this stuff until it is really falling apart.

I hope to bring you Pig Tail and Split Peas next.  It’s one of my favorite Belizean dishes.   Seems pretty easy too.  Wish me luck and hope that the actual tails do not require much cleaning.