Home » Belize Travel Blog » Travel in Belize » Hopkins: A Sleepy Village Every Way You Look at It

South of Dangriga,  after a 40 minute ride on a long dirt road, you arrive in Hopkins Village right on the Caribbean Ocean.  The sea is on one side and the Mayan Mountains on the other.  Wikipedia lists the population of tiny Hopkins as 1000 villagers but I really have a tough time believing that.  In fact, it seems to me that at this time of the year, the chickens well outnumber the villagers.

I arrived at night so I couldn’t see very much but woke up early for a walk on the beach.  The ocean was flat as could be and remained that way all day.  The sand is quite different from that in San Pedro…almost like course brown sugar instead of powdery white.  And it is loose and soft not hard packed like Ambergris Caye. 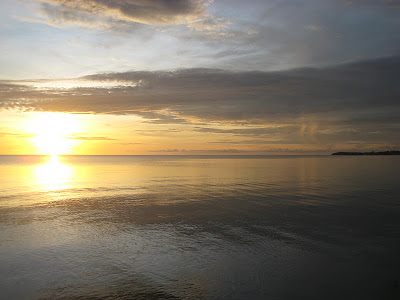 The first person that I ran into was the “Lyrical King”, a well known rasta gentleman that resided for years in San Pedro.  He is originally from Hopkins and was on the beach walking his dogs.  It’s hard to take his picture.  The guy never stops talking. 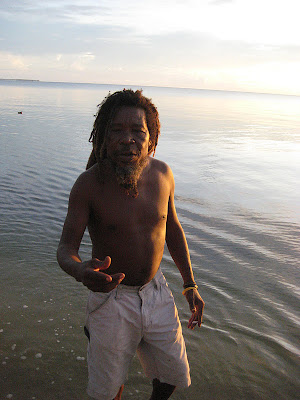 I walked the dirt and stone road past some kids washing their hair outside in a plastic tub, a woman feeding her chickens and ducks and an elderly woman hand grinding coconuts to make milk.  It really has a village feel.

I walked down toward the village to grab some breakfast.  Kids were walking to school, I passed the town library, a large church on the ocean. 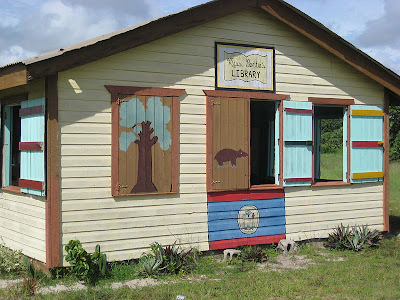 By the police station, I found this little breakfast joint/cultural central/dive shop/bar…it had a bit of everything.   The place is called King Cassava Culture Bar.  Some nights they have drumming, some nights they have karaoke (an “off” night when it comes to culture…the waitress told me that it is mostly classic American country).  Breakfast was simple but good, Creole eggs and a really good fresh flour tortilla.  And don’t be so judgey wudgey about a 10am beer.  My only other option was Coke.  And I can’t stand that stuff. 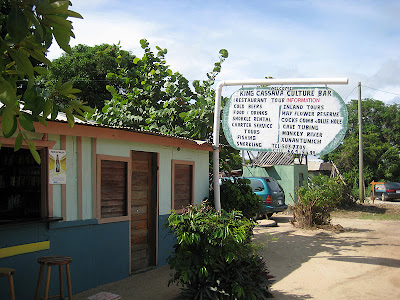 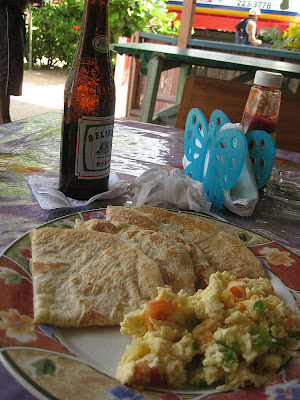 To say that there was nothing going on in the village is an understatement (October is the heart of slow season everywhere in Belize).  And to be fair, these last two days have been HOT.  Time for a swim.  And how fortuitous.  Mark, the owner of King Cassava is also a taxi driver.  He brought me to the south of Hopkins where the larger resorts are.  Definitely walkable on the beach but I felt like I was melting.  There are a handful of pretty good sized hotels (Hamanasi Dive Resort being the most well known) and a few docks. The rest of the town is relatively dock free.   I parked at Beaches & Dreams/Barracuda Restaurant for about an hour and went into the water.  Again, other than the owner, the place was relatively deserted.  I did see a guy racking their beach. 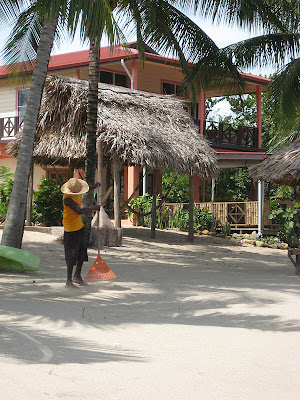 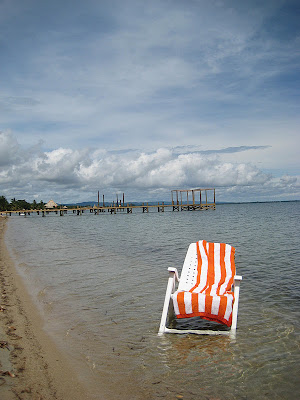 I walked further down the beach to Hamansi Resort.  An impressive looking place.  And obviously to visitors too…they have won lots of travel awards and acclaim.  They have a nice pool, a very nice bar and restaurant and a dive shop (the only one I saw in Hopkins).  A few people were eating lunch.  I bought a beer ($7bzd was by far the most expensive I’ve had so far…in the village they run anywhere from $3 to $5bzd).  I chatted with a tourist from Maryland.  She raved about Hamanasi…said they chose the place because it was on many “Ten Best Hotels in Belize” and that the service was outstanding.  Well…there you go.  I’m also guessing that it’s not a budget spot.  I took my place in one of the beach hammocks and spent a couple hours reading and napping.  Well worth the extra $2.  Life in Hopkins is very tough. 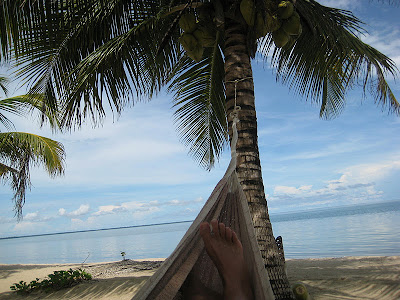 Walking home, I passed a few more resorts then stretches of unused beach, small guest houses and cabanas, small homes and just beach shacks.  Lots of locals live on beachfront properties of all sizes (also a big difference from San Pedro).   I saw no one on my half mile walk back to my guest house…except for some chicken pecking in the dried seaweed for…god only knows what the find in the sand.

I stopped at the supermarket on the way back.  Cheap!  I bought 2 nice white wash clothes (I can’t believe I forgot my sweat wipers in San Pedro), 2-500ml bottles of water, a small bag of Marie Sharp’s cassava chips, a bar of Zote and a Banks beer.  $10.75bzd.

If you don’t know Zote, you are missing out on one of life’s necessary items.  I discovered it in Belize.  It’s $1bzd a bar and does everything.  For hand washing clothes, it is indispensible.  I also think a quick wash body wash with it keeps mosquitos at bay.   But I’ll need to confirm this speculative research at a later point.  I wouldn’t be surprised if this wonder bar did even more miraculous things. 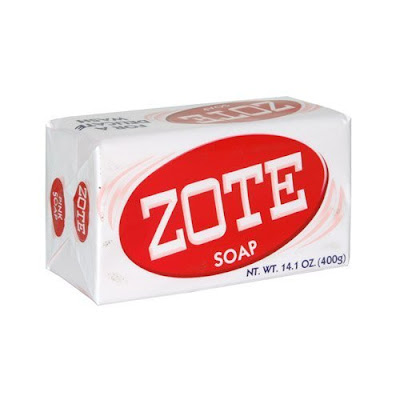 And around Hopkins I found that I’ll need to amend my King Of Beers post.  Banks Beer (“the beer of Barbados” the label proclaims) is everywhere down here.  Much more than Red Stripe.  I had my first one…and it’s pretty good.  (250ml and 4.7%) But in a blind taste test, I’d be hard pressed to distinguish it from Belikin Regular.  They taste exactly alike.  Why pay the extra 50 cents? 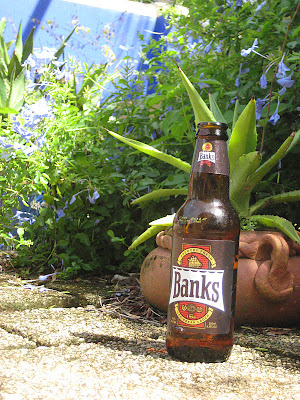 I’d also work on that label, Banks, if I were you guys.  It makes the beer looks kinda cheap.

After a lengthy shower and more lengthy nap, I headed back out…maybe late afternoon was the “happening time”.  I asked a rasta guy where the nearest bar was…maybe something on the beach…he led me on a mile and a half walk all the way north to a tiny beach bar where 3 locals were enjoying Belikins.  And then another 20 minute walk to where the fresh water river flows into the ocean (a place locals call Hawaii – interesting name…I didn’t know Hawaii was known for it’s silty brown waters.  NOTE ADDED LATER:  I’m hearing that this spot used to be crystal clear until the Chalillo Dam project.  Muddy waters and higher electricity prices.  Some project!).   Sigh…maybe I just need to let go and realize that Hopkins Village is a place to get away from everything and relax.

I’m rambling…I’m in some sort of village trance, a beach coma…I’ll fill you in on the DELICIOUS dinner I had next time.  Off to find some breakfast.

4 thoughts on “Hopkins: A Sleepy Village Every Way You Look at It”