Since I moved to Belize, I can’t get enough Cilantro.  It’s in almost everything here…soups, rice, stews, burritos, ceviches, sauces…everything.  And I love it.  It’s herby, cool, clean, a bit citrusy.   I even like a few sprigs of it in iced water.

I’ve always associated it with Mexican food or Thai food, but why isn’t this ridiculously good herb seen more in the US?  It’s all parsley (blah), oregano or basil.  Why aren’t we eating cilantro every day?

So I decided to do some internet research on my little green buddy.  And my internet queries shocked me.  WHAT?  Tons of people hate cilantro.  DESPISE IT!  One site calls it “the herb of the devil”.  There are actually quite a few anti-cilantro websites like http://www.ihatecilantro.com/.  This confused person’s motto?  “Cilantro:  The most offensive food known to man”.  Some sites even have “Cilantro Free Restaurant” directories.  Personally?  I feel bad for these guys. 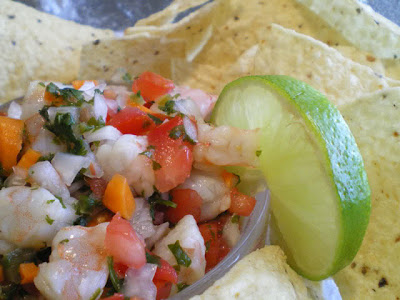 Let’s move on.  It must be the result of some sort of herbal brainwashing.

What’s the origin of the world’s most delicious herb?

Cilantro or coriander is native to Southern Europe, North Africa and Southeast Asia.  So it was Christopher Columbus who introduced many products from the Americas to Europe including:  corn, tomatoes, chili peppers, potatoes, chocolate, tobacco and peanuts.  Maybe even cilantro was on the Nina or the Pinta.    (What were Europeans eating before 1492?)

The Europeans did ship some important stuff over here including:  horses, grapes, chickens, cows, honey bees, apples, tea and coffee.  The exchange is pretty interesting.  Hard to imagine that we’ve only had access to these things for about 500 years.

Other stuff that I learned:

Try this recipe for Cilantro Pesto.  I love it.  And I hope you do too.

1 cup cilantro, pack it in
1/2 cup of almonds (toast them a little bit – and any nut works)
3 large cloves of garlic
1/4 cup grated parmesan cheese
1/4 cup olive oil
salt to your taste

Add first three ingredients to a blender or food processor.  Blend until smooth-ish.  Add cheese and drizzle in olive oil while mixing.

Mix with pasta (eat hot or cold), spread on little pieces of toast, add it to hummus or on fish, chicken or shrimp and you will be one happy cilantro lover.

Or try muddling fresh cilantro in a glass with some lime, add sugar and rum…or with tequila and triple sec (a cilantro margarita).

Or mixing with cream cheese and slathering on everything.  I’ll stop now…I could go on and on…

SO…what shirt will I see YOU wearing?  (And yes…these shirts are really for sale on the internet). 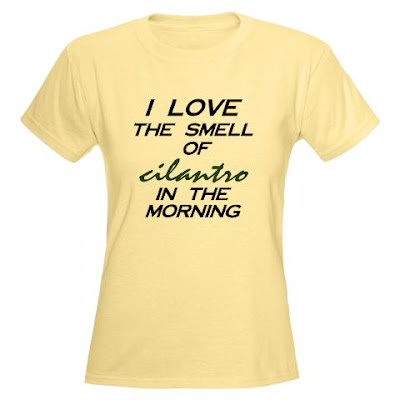 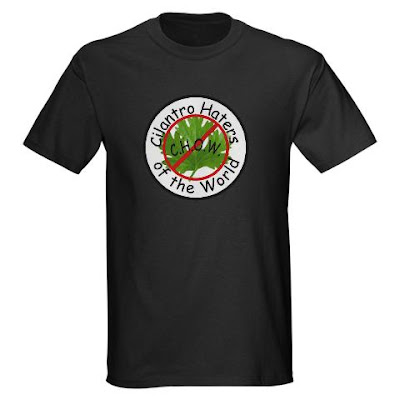 You guys certainly know what to get me for Christmas.  And don’t forget to scroll down a bit…I’m adding some new events to YOUR SAN PEDRO EVENT CALENDAR.