I set out at 2.30pm for a 3.30 meeting.  No problem.  It takes about 30 minutes to get into town.  But, as usual, there is so much stuff to see…and too many people to blab to.  For my NYC sensibilities, I was shamefully late.  Apparently this is my new thing.  It was 3.37pm and I was running down the beach.  (I will never get on “island time”).

And here is what I saw… 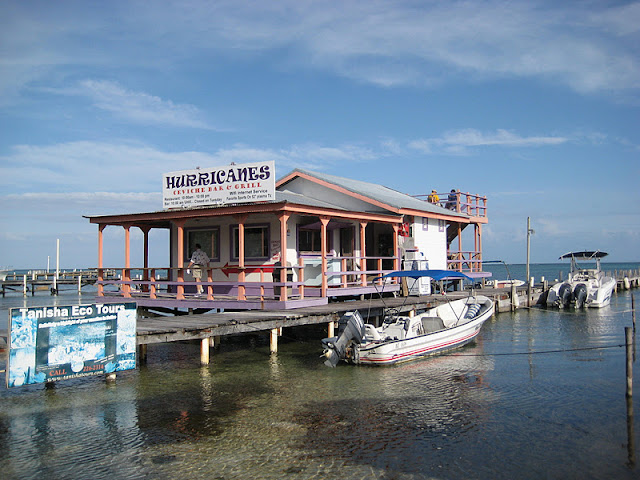 Hurricane Bar across from BCs.  When I first started working at a bar, I was told that there were only three pier bar permits that had been given and no more would ever be issued again.  (Can you name them?)  But in the past year or so, something changed and Hurricane’s opened.  Never say never in this town.  It has a great location and a nice second story deck over the ocean. 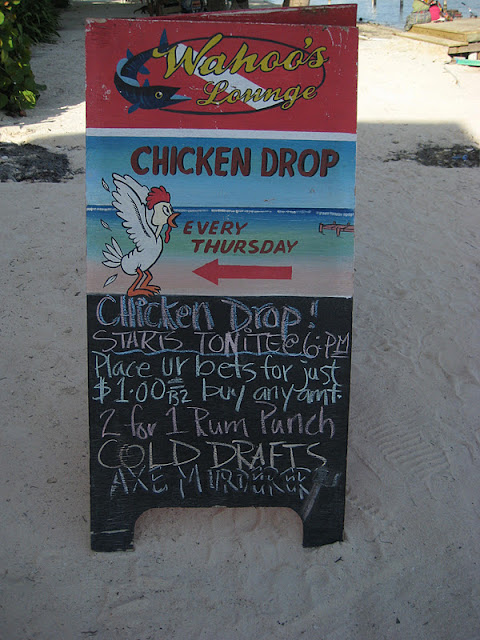 Chicken Drop tonight…hmmmmm….maybe I’ll make it back for this.  The last drink on the board, the “Axe Murderer” sounds intriguing.  And I always like the band and/or MC that they have at this Thursday night event. 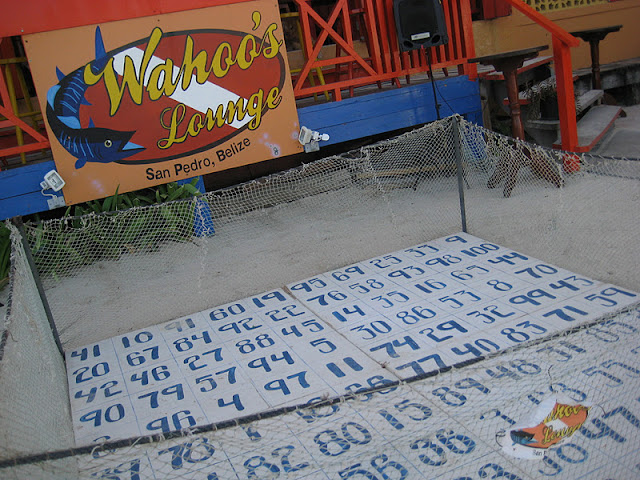 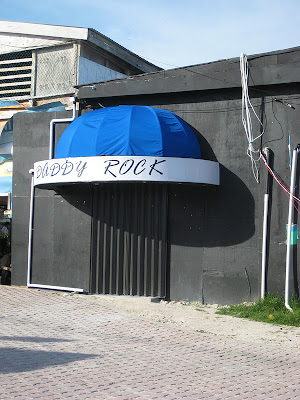 New side door at the old Big Daddy’s Night Club giving it a more VIP feel.  (Also allows you to sidestep the shady characters that hang out on the beach).  It’s been re-named Daddy Rocks and has surpassed Jaguar’s Temple Night Club as the cool spot to be late night.

So…feeling that pressure, Jaguar’s is closed for it’s own remodel.  I hear that they are planning to open around Christmas.  No more paper mache stalactites and stalagmites?  No more stinky smoke machine?  It’s the end of an era. 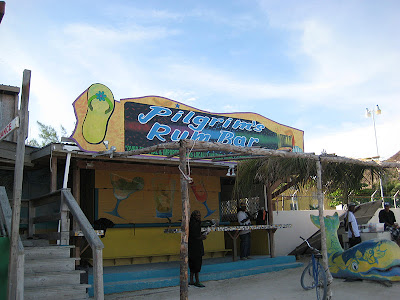 This bar clinging to the side of Big Daddy’s…I mean Daddy Rocks…has been through 3 or 4 name and owner changes over the past two years.  And is now closed again.  It was Bikini Bar, Barefoot Bar, Pilgrim Bar.  Now it’s where guys hang out to sell wood carvings.  Wonder if it’s going to re-open for the season?  Another tough location.  There have to be 8 bars in about 100 feet of beach. 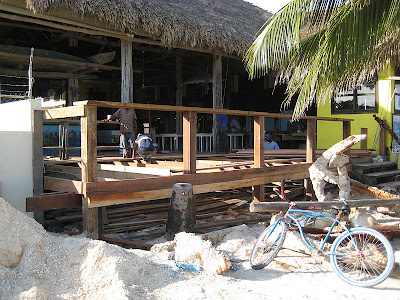 Is lumber expensive in Belize?  If so, this must be costing Fido’s a fortune!  They are almost finished with their brand new flooring (and it looks great).

Monday, October 24th is the scheduled re-opening date.  And to reward you for your patience, they are offering FREE BEER from 6-7pm.  This should get interesting!

Last time we did free beer at my previous job…three kegs were drained in just over an hour. 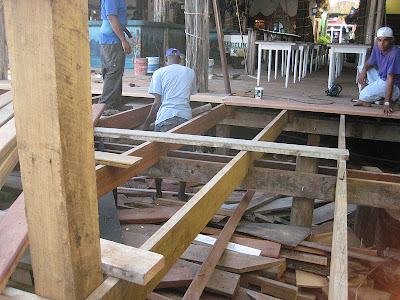 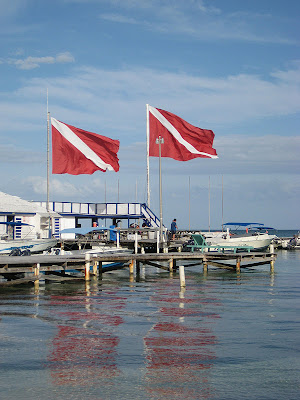 The flags were flapping at Amigo’s Del Mar Dive Shop.  The wind was blowing from the north last night and it is downright chilly.  Quilt and PJs chilly. Not yet socks weather…but it’s coming.  Get this…it went down to 73 last night.  Great sleeping weather.  And curly ladies, the humidity is below 70%…you actually have a chance of a good hair day!

D’Sea’s Convenience Store on the beach is now closed and for rent.  Some new(?) hotel has opened above it.  I’m quite sure I’ve never seen this sign before. 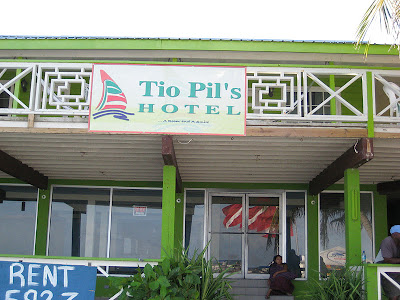 Lily’s has poured a new concrete patio and they now have plenty of seating.  I’m hearing about more and more people eating there and really liking it.  Remember to try the ceviche…it’s one of the best on the island. And you can’t beat the view. 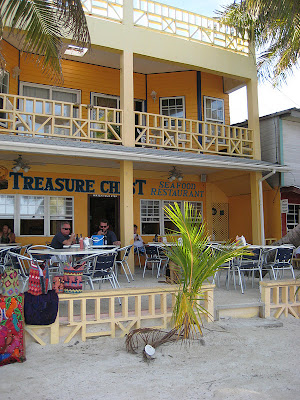 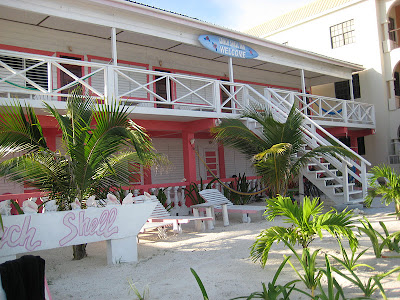 Conch Shell looking pretty as usual…I always like the bright coral color paint and the conch shells all around. 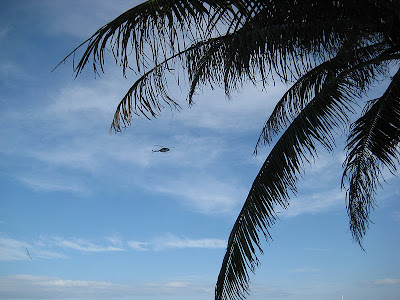 “The Bachelor” continues to film in San Pedro…yesterday they were up north at Captain Morgan’s and Coco Beach.  Everyone in town could hear these helicopters going back and forth.  Today, I am going to try to track this show down based on a secret tip that I got.  Yes, I am a crazy paparazzo and have too much time on my hands.  But it could be good times.  I’ll report back.

Stopped at the beautiful Blue Tang Inn to take some pictures.  You will definitely be hearing more about that. 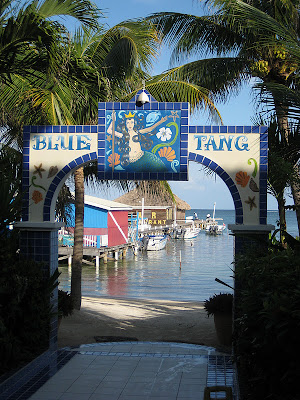 Playa Chel (which must have cost a small fortune to build) could only have been open for a year or so.  It just never got off the ground at all.  Now it can be all yours… 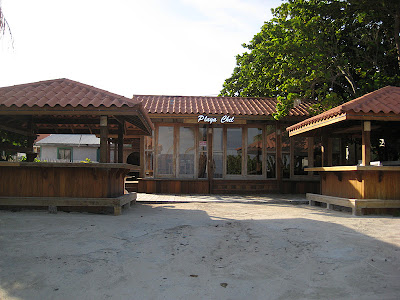 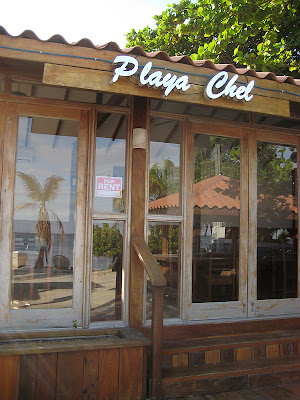 Next stop?  Ambergris Brewing.  There has been quite a bit of buzz about this new restaurant and bar.  Great pizza, paninis, and the cinnamon rolls on Sundays are supposed to be “to die for”.  What kind of “scoop” can I really have if I leave stones unturned?  So, for the sake of the news, I stopped in for a beer…or two.

Did you know that they also have coffees, pastries, Internet!, a bar, and a super friendly owners? 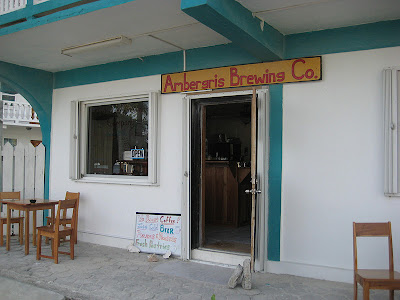 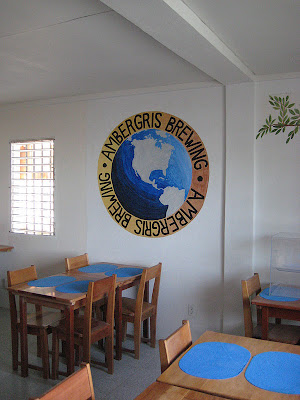 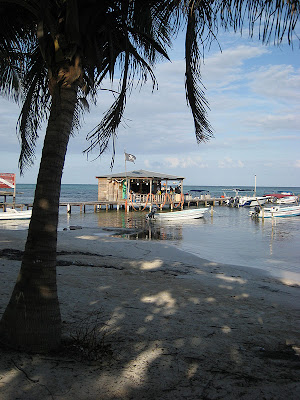 And a view that looks something like this…could be worse.

And it was a great change from my “all pig-tails, all the time” eating plan.

I know what you want to ask…is Ambergris Brewing actually brewing?  The answer, sadly, is no.  They have been unable to obtain permission to brew their own beer, even on such a small scale.  I would imagine that Belikin can be a tough “competitor”. 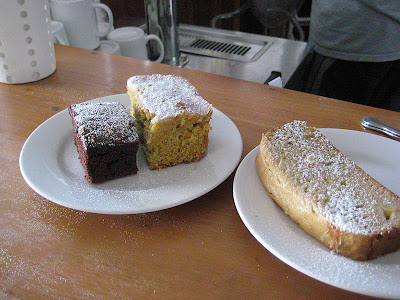 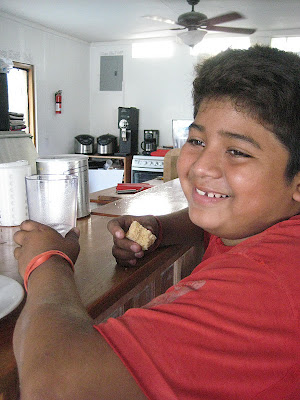 Here is the owner (sorry, I am horrid with names!) and the shop.  A very cool place.  I will definitely be back. 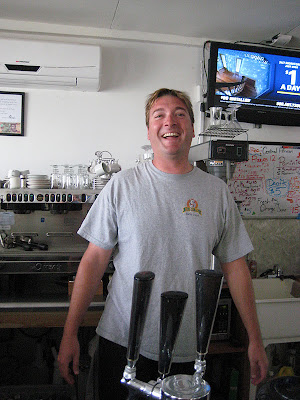 This is a long post!  Time to head home…and I didn’t get far.  Ran into some friends at Wahoo’s Lounge/The Chicken Drop.  Can’t hurt to have one more beer and buy a few tickets.  I could definitely use $100bzd.  I lost AS USUAL.  Wah.  But not to toot my own horn, I did get a cool picture of the chicken’s shadow as the woman is blowing into it’s butt.  The night wasn’t a complete loss. 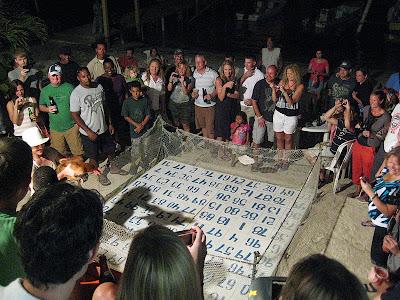 Wahoo Lounge is not all chicken crap and beers (that could be a great country song title), they have a really cool “Taste of San Pedro” idea.  They are doing $5 samples of food featuring different restaurants, particularly ones that might not be on your daily walk.  Right now, Mathieu’s Deli is in the spotlight.  So, if you are in town and want a snack, stop in Wahoo’s Lounge.  The bar, the bathrooms, the swings…all have been totally rejuvenated by the new owners and it looks fantastic. 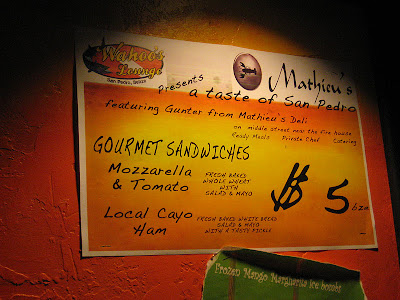 Guys, please let me know if you are getting bored rambling around town with me.  (This is a particularly lengthy one)  Any suggestions that you have for posts will probably be ignored but I still love to hear them!