You might as well ask me to meet you in Guatemala City… Going the few miles north of the bridge in Ambergris Caye always seems like a big deal to me.  Something to be planned well in advance.  I guess I’m a city girl.

But let’s back up.  Our island, Ambergris Caye, is split in two by a narrow break:  the south side is smaller…maybe 4 or 5 miles long and contains San Pedro Town.  North of the bridge over “The Cut” is the north side, it’s much longer, less congested and contains the big condos and larger resorts.

Yesterday, I took the water taxi (Coastal Express) to attempt a visit to Captain Morgan’s new casino.  It’s the only one on the island.  I had spoken to the owner a few weeks ago and had picked a Sunday.  The casino opens daily at 6pm but on Sunday, they open at 10am for football.  Sure…I don’t like football or gambling or the World Series of Poker (which was bound to be on TV) but it could be a good time.  Hey…I could always hang out at the bar. Plus I’ve been getting lots of questions about the place.

We got to the 12.30pm boat a bit early so we could enjoy a Bloody Mary at Cholo’s Bar.  They are exceptionally good. 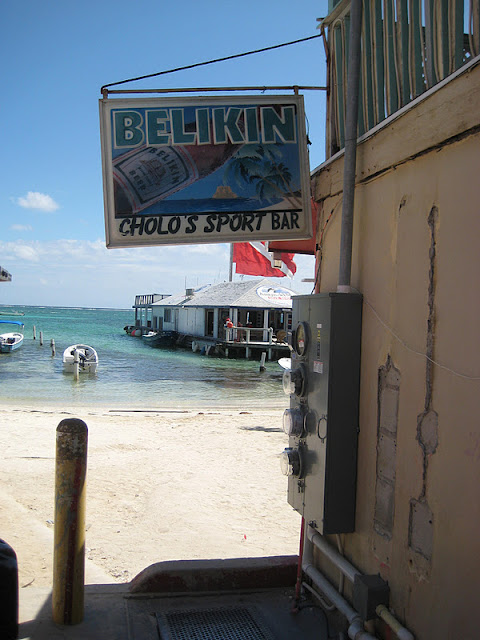 Cholo’s is a cool little sports bar that sits right on the beach.  It’s very popular with locals, divers and visitors. It’s one of the few spots that you can find people enjoying a beer at 9am.  NO JUDGEMENT!  Try it out when you are here…the prices are low and it’s just a great spot.  Heck…it even got awarded “Best Beach Bar to Feel Like A Local 2011” in San Pedro’s Best Bars 2011. 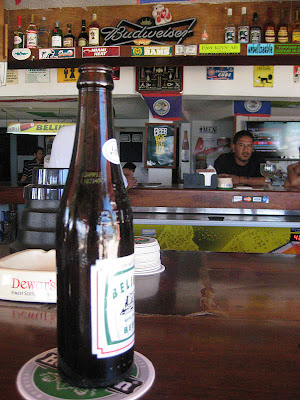 Such a beautiful day for a boat ride. 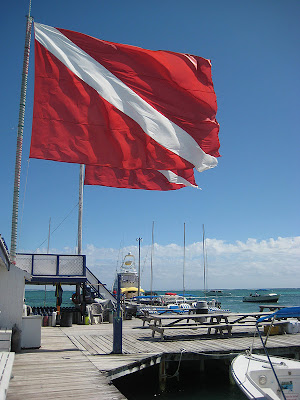 The waiting area at the Coastal Express has tons of old buoys decorating the ceiling. 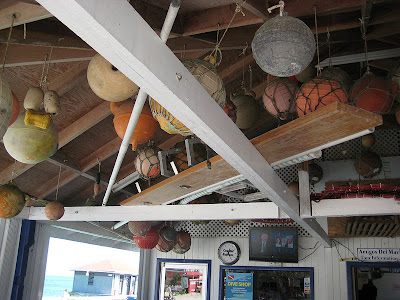 The boat was easy!  And not expensive.  About 20 minutes and quite a few stops at different docks to drop off passengers, we were at Captain Morgan’s.  I sat in the very back of the boat and got a good spritzing.  I’m going to have to do this more often. 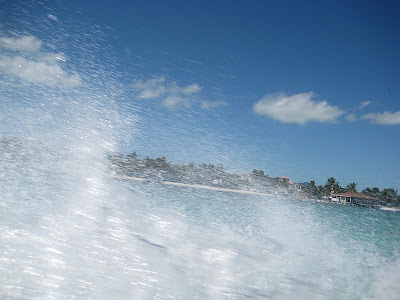 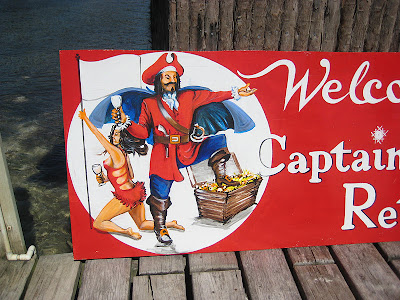 Not sure about that woman behind the Captain (at least she got a cocktail) but I guess sex sells.

The resort has a really pretty beach. 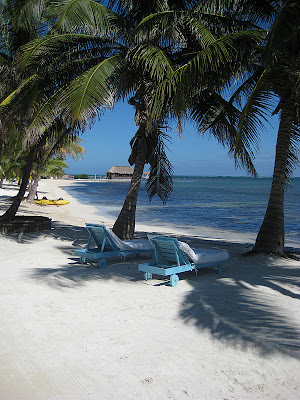 And is all built in a very Belizean/tropical style.  Lots of thatch and palapas. 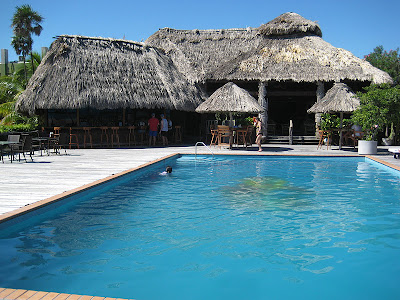 We pranced right up to the casino (back in the main building above), I had my $10 free voucher and found it CLOSED!  What?  You heard me.  CLOSED.  The bartender filled us in.  They had cancelled Sunday afternoons since it wasn’t busy enough.  Oh well…it was a nice trip.   Good to expand my horizons.

We decided to take the 1.45pm boat back down south.  We had something to eat and headed back to the dock.  Luckily…before the water taxi arrived, a local fisherman was dropping off a guest and heading back to town.  We hitched a ride with him, his daughter and her new puppy, Cookie.  She was a bit of a ham.  Cookie looked like she just wanted a nap. 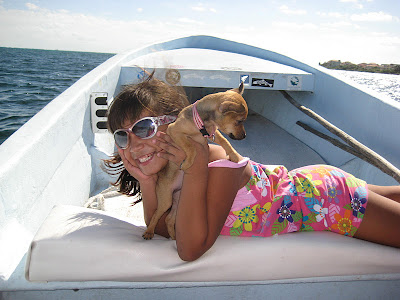 We headed over to Pedro’s Inn to catch the beginning of the World Series of Poker.  The finals were starting and a Belizean, Bob Bounahra, is (was) one of the final 9. 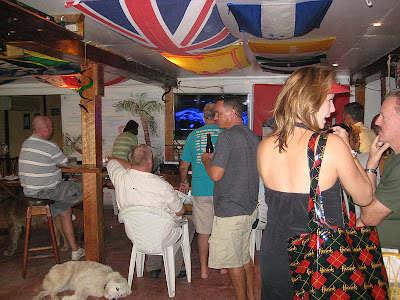 Not going to lie, while it’s exciting to see a Belizean a part of such a big event, this is not my favorite television programming.  In fact, it was like being hit with a tranquilizer dart.  But, you don’t even have to say “better luck next time” to Bob. He won $1.3 million US dollars!  Fantastic job.

I’m sure the Belizean tax collectors will be at the airport to welcome you home with open arms).

2 thoughts on “A Very Special Occasion: Going Up North”