“Good Morning, San Pedro” is our weekday TV morning talk show/radio show here in San Pedro, Belize.  It’s really the only San Pedro-centric show we have and it is a crazy mix of talk, weather, fundraising, commentary sometimes in English, sometimes in Spanish, telephone call-ins, quirky and lengthy commercials, and a large range of guests.  (The show is very entertaining.)  For instance, yesterday the program started with a shrill Spanish speaking clown and ended with a pretty angry mayor defending her right to put up this clock tower/giant neon billboard tribute to Ramon’s Village right in the center of the busiest street in San Pedro. (If you are just learning about this, check www.sanpedrosun.com for the drawings and background).

Mayor Paz started with good old fashioned surprise.  She had no idea this would be a problem.  She thought it was just a beautiful $150,000 addition to our town.  (Think of what $150k could do in San Pedro!)

But her main tactic?  Shame.  Shame on the paper, shame on the bloggers, shame on Facebook for exposing and embarrassing this town on an international level.  (She said that only 5% of the town has access to a computer and implied that the Facebookers are elitist.) Shame on all of us for blaming Ramon’s Village for any of problem.  Shame on us for looking a gift horse in the mouth.  A “more educated” group would know that the proper form of protest would be writing letters to the San Pedro Town Council.  She shamed gringos, implying that if you don’t vote, you really don’t have any say it this matter.

She spun around on statements made in the previous days.  At first the absurd location (in the middle of front street!) for this 20+ foot clock was blamed on Ramon’s Village.  She told the local paper that donation would only be made if that was the location.   Yesterday she said it was all her idea.  After the shame, she changed the entire subject quite a few of times.  From the bridge up north to the paved roads – equating those projects to a giant faux European jumbo-tron billboard in the middle of the street) and even suggested better things to protest.  This clock tower was not one of them.

I mean…seriously?  Even our water company (BWS), with pipes right below this project, has called the clock construction “disastrous”.  As you can see in the pictures below, large vertical cement pylons have already been inserted into the street.

Her stubborn insistence on continuing this project without public consultation leads many to question her motives.  She only has a few more months in office.  Why does she want to leave on this sour note?  For this?  As she said in the morning show “she will not listen to a small group”.  Many can do nothing but think the worst if she won’t even halt this endeavor on a temporary basis.

So…in gringo tradition, we protested.  A group of about 100 gathered around the hole in the street with signs to make it known that we feel this is just a terrible idea.  The press was out in full force…San Pedro Sun, Ambergris Today, LoveFm and Channel 5 News (you can check out their story here:  Channel 5 – Clock) 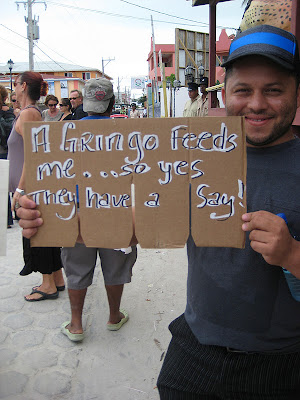 Tourism and visitors from all over the world, directly or indirectly, feeds all of us on this island.  The opinion that tourists and expat business owners should have little to no say is absurd.

Hmmm…maybe this was the 11th commandment. 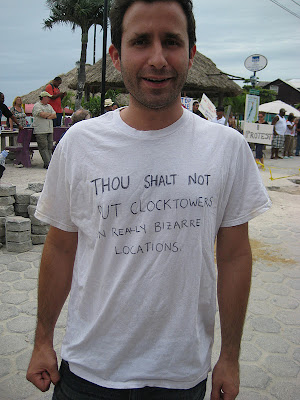 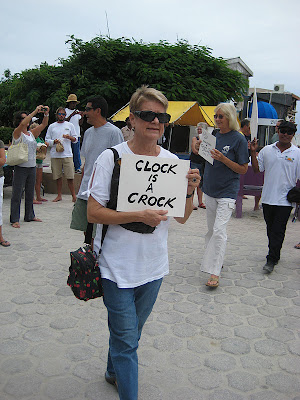 The Channel 5 news guys did a few interviews for the night time broadcast.  Look at the tiny space around this hole.  This guy crouching fills the entire area.  It is going to be interesting/scary/dangerous watching vehicles, pedestrians and bicyclists squeeze through in this very busy part of town.  It is going to be scary/dangerous watching aggressive taxis speed around blind corners onto side streets to get to the other side of San Pedro.   Let’s hope no one gets hurt. 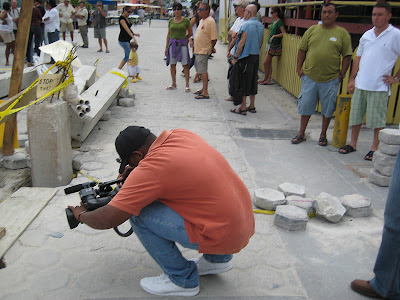 Someone has also put small signs all around town suggesting that we boycott Ramon’s.  If the mayor is not going to listen, it seems as though that is our only choice. 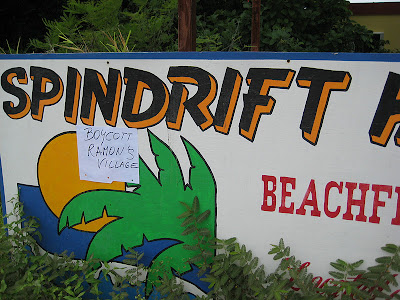 Let’s hope the greater town rallies a bit more in the coming days so that we can halt this project once and for all.  Even if you like the location and like the clock, the way the town council is acting should be offensive to voters of all parties, tourists, and non-voting residents alike.

5 thoughts on “We Shall Overcome: Protest Against the Clock Tower”