The city of Chetumal, Mexico is a quick and relatively easy trip from San Pedro, Belize.  Hardly a tourism mecca or international hotspot, Chetumal is the capital of Quintana Roo.  It is a small city by world standards but has half the population of all of Belize (151,000 vs. 305,000ish).  Honestly, I’d never heard of the place before I moved down here.

It is like visiting another world. From McDonald’s to Walmart to crowded city streets jammed with traffic lights and cars to the fact that so little English is spoken.  I mean really…almost none.  Gringos are few and far between.  But heck, it’s a great way for me to fine tune my charades skills.

Before we get to Chetumal, let’s get breakfast.  (As usual, you guys are getting ALL of the details.)

I stopped by Celi’s Deli in San Pedro on the way to the boat because they have the best johnny cakes in town.  $3bzd buys you a tasty and buttery little biscuit, toasted, with ham and real cheese. 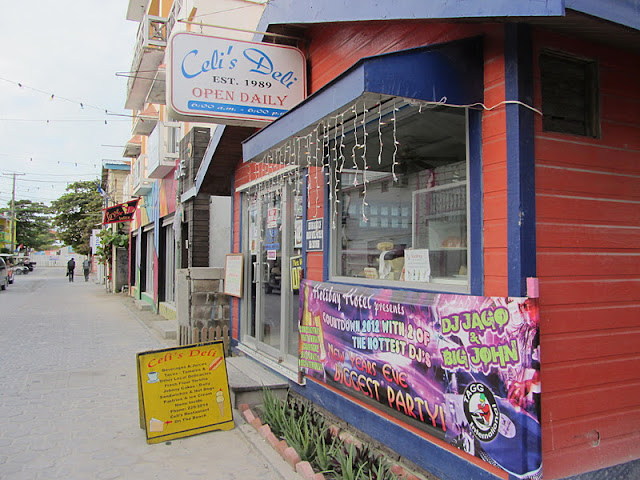 And they are open EARLY.  The place is generally pretty crowded with fishermen and tour guides getting their morning coffees, johnny cakes and fry jacks. 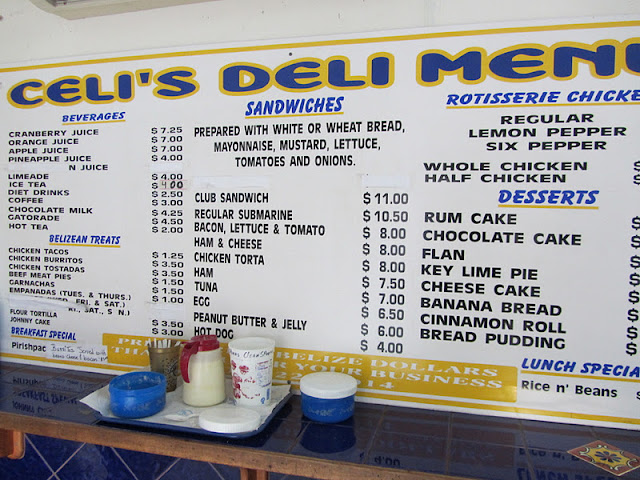 There are two boats that can shuttle you from San Pedro to Chetumal.  One takes about one and a half hours and is more expensive (Water Jets).  I went for the 2 hour cheaper option.  For me, it is the best boat.  San Pedro Belize Express.  It is not that the boat moves slower just that they leave from the reef side of the island while the other boat leaves from the lagoon. (Best to check their sites for the most current prices and more information).

San Pedro Belize Express to Chetumal leaves at 7.30am and it is suggested that you arrive a bit early to buy your ticket and to fill out your exit form.  I was a tiny bit worried.  They have been advertising a big concert for weeks now – Camila? – and my taxi driver thought there would be a big crowd. 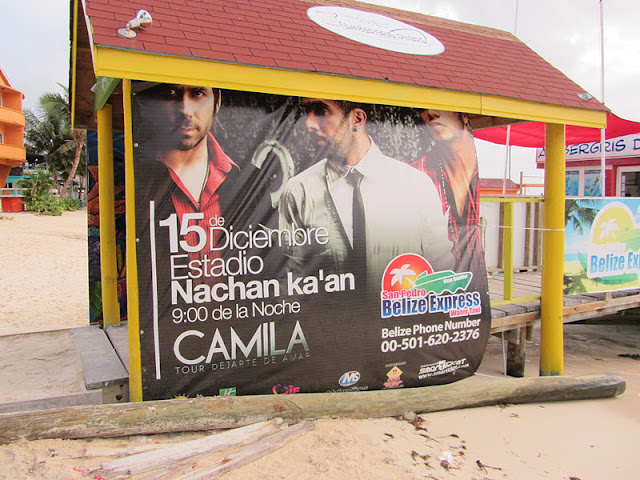 The boat was about 2/3 full.  And mostly tourists and nuns.  (Just a guess, but I’d reckon neither group was travelling to see three men called “Camila”.) San Pedro Belize Express has a new boat with all of the seats facing comfortably forward.  The ride is still a bit bumpy but put a life preserver under your bum and it’s not bad at all. 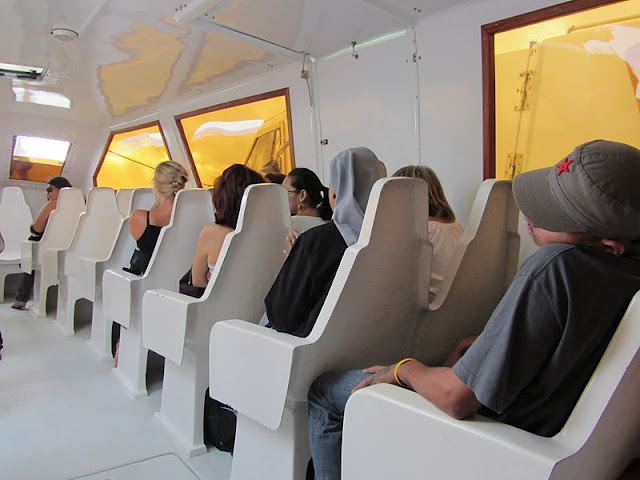 Water or sodas are distributed for free and the boat attendant now does money exchanging.  (Hmmmm….) The rate is 6 pesos for $1bzd or $12 for $1US.  Not the greatest or worst rate in the world (now about 13.75 pesos for $1USD) but handy if you are leaving the country and have a bunch of Belize coins or small bills left over.  Or if you just want to pick up a few pesos to take a taxi when you arrive.

(NOTE:  Each and every cash machine line that I saw on this trip – whether in town or the mall – had 10 or more people waiting.  Must be the holidays.  If you are on a turbo-Xmas shopping trip, factor in this time.)

They have moved the customs and immigration in Mexico from the end of the dock (where you get off the boat) to the offices on the street side.  It has slowed down the process significantly.  With just one woman looking at the passports for 2 relatively packed boats, it took about 45 minutes to get through.

Get ready for LOTS of pictures of Chetumal.  The park and government area along the water is FULLY decorated for Christmas.  I bet it looks spectacular at night, there are lights hanging everywhere. 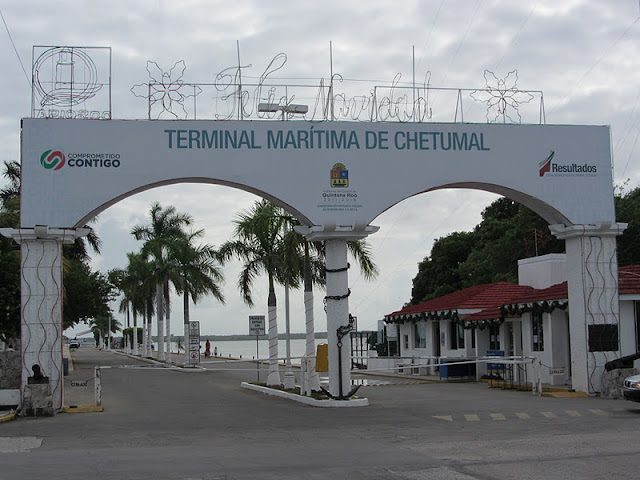 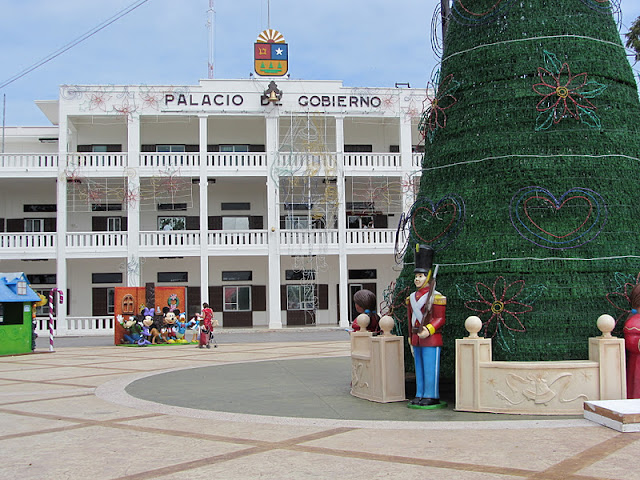 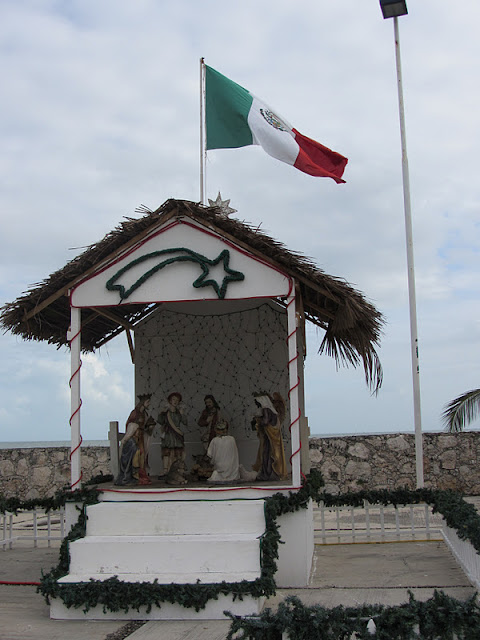 To the main street that runs right up the center of town. 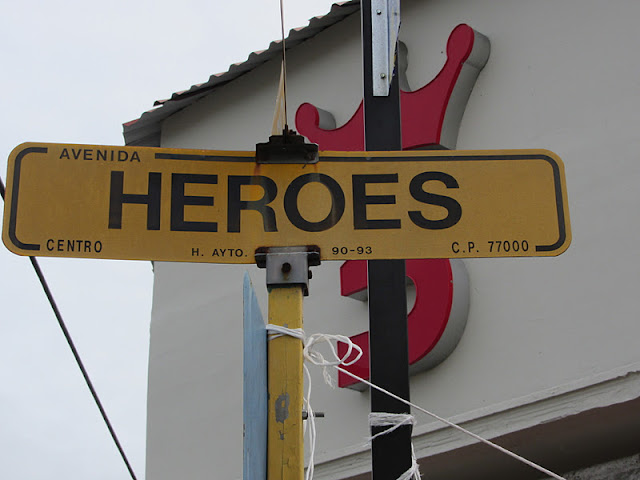 It is lined with clothing stores and lots of street merchants.  It runs from the bay up to the Museum of Mayan Culture (which is worth visiting…but not on this trip) and the Old Market. 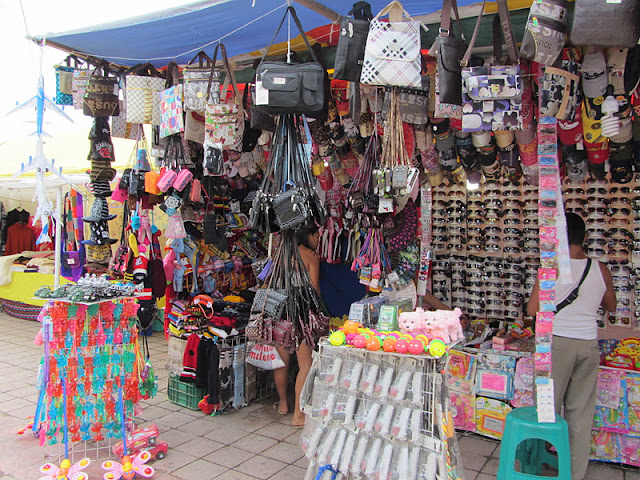 These little baggies were for sale everywhere.  At first I thought they were just colorful little candies.  It took my a while to realize they were tons and tons of fire crackers.  Christmas eve must be one noisy night in Chetumal. 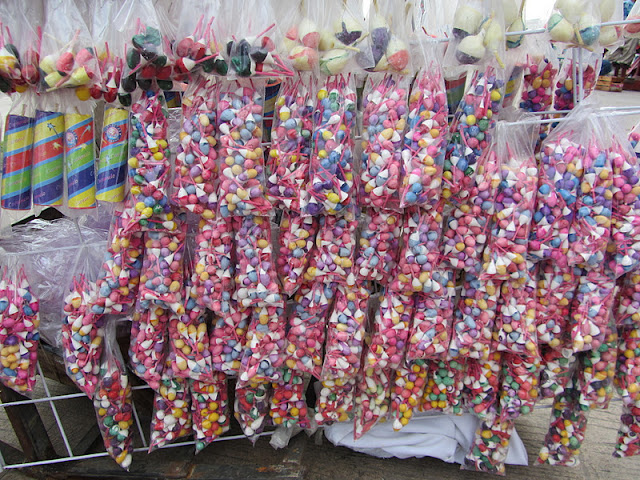 Carved keys seemed to be a big seller – they carve your name right in there and it becomes a piece of jewelry. I was actually tempted but didn’t have time to wait for my name to get carved.  (It is carved where the teeth of the key would normal be.) 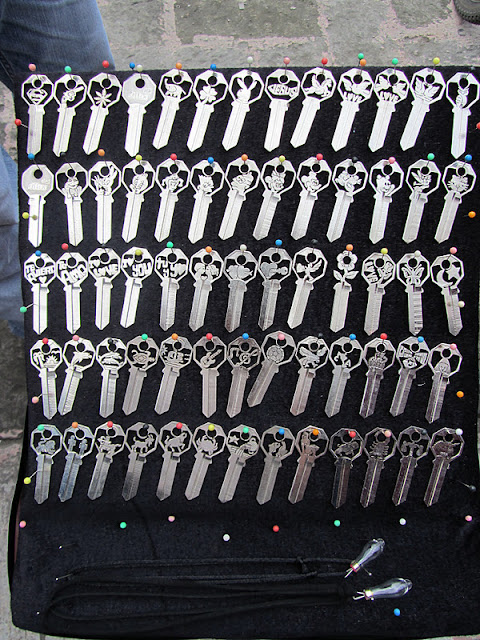 I found the world’s saddest Christmas tree prominently displayed in front of one store.  It was a drab dusty khaki color.   Perhaps you are meant to decorate it with garbage and recyclables to make some sort of statement about global warming and the destruction of the environment? 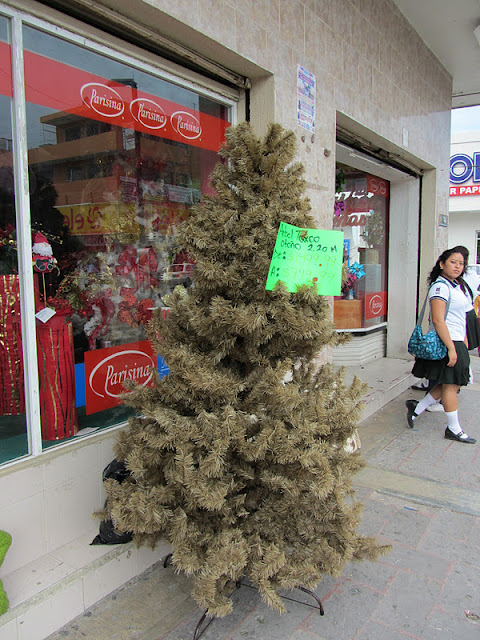 Guitars of all sizes are for sale EVERYWHERE.  Definitely a cool gift and again, I thought of buying one.  I am very indecisive when I get confronted with all of the choices in Chetumal. 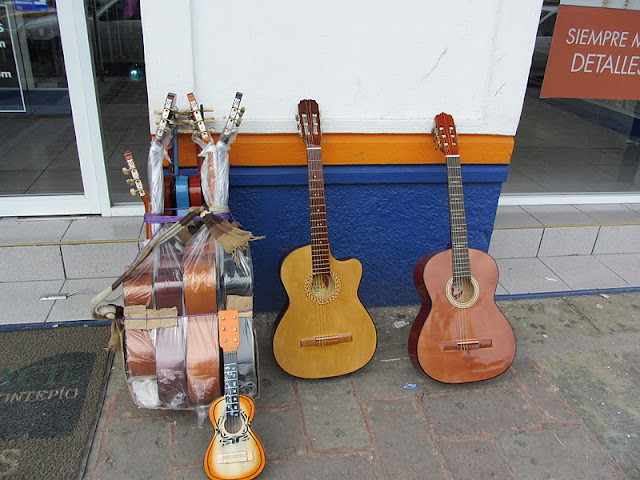 I bought my contact lenses at a local optical store.  The real reason for my trip!  $300 pesos for a 6 pack of Bausch & Lomb soft lenses.  Best to buy them in the city…once you get to the mall the price increases substantially.  ($486 pesos) 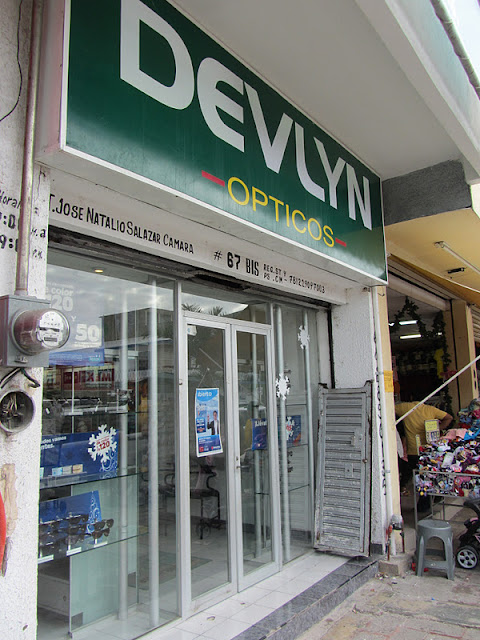 And my favorite store of all in the old market.  Devoted to Christmas pageant costumes.  That is all they sold. 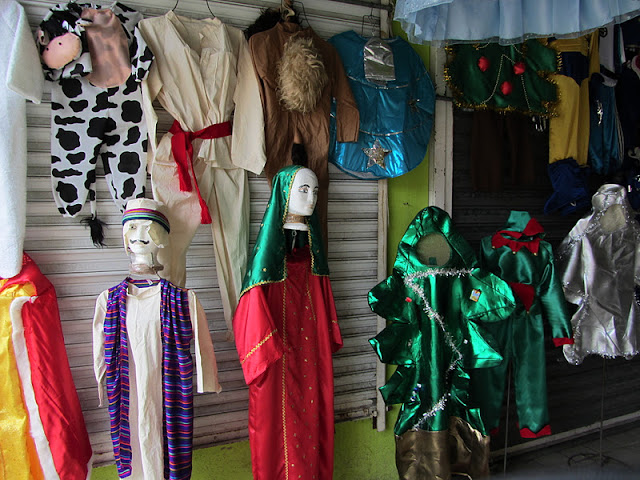 What kid doesn’t want to be wearing this vinyl get-up for a Christmas in the tropics? 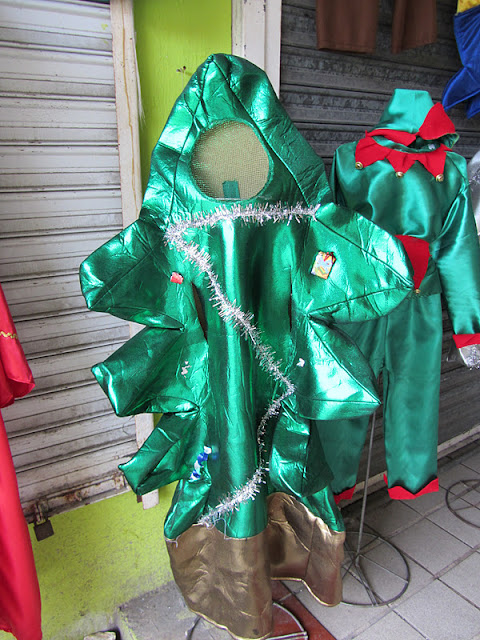 Mexicans and Rebecca Coutant have quite a few things in common.  But first and foremost is our love of pinatas.  I LOVE THEM.  There are a number of stores devoted to them.  And a surprising amount shaped like Santa.  Is that sending your children mixed messages? 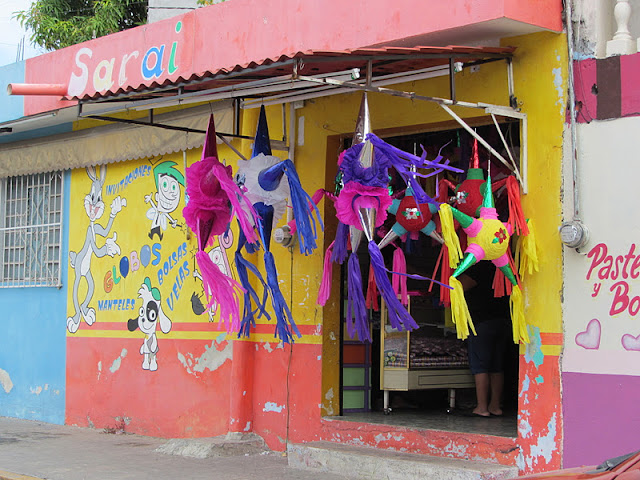 Did you know that you can bring a picture of anything…you, your pet, the boss you can’t stand…and they will make a custom made pinata just for you?  Love it. 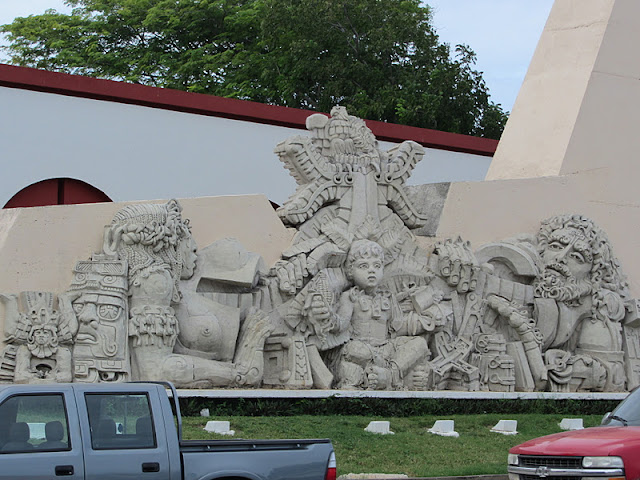 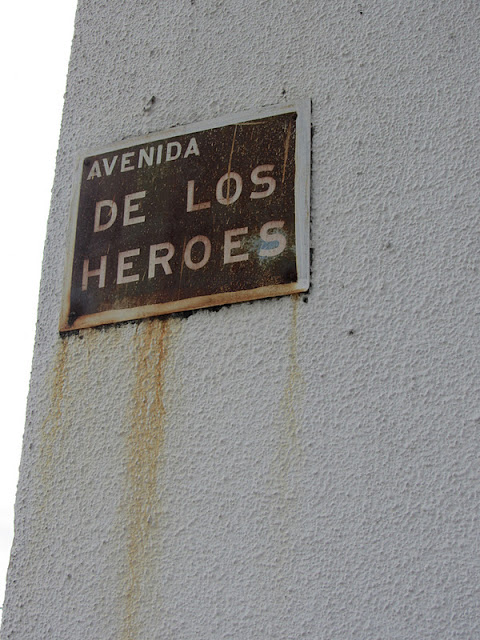 Stayed tuned for Part Two.  The mall, the casino, Chedraui (sigh), the beer (double sigh) and some very tasty seafood tacos at a famous local joint.  Even though I was in Chetumal for just four and a half hours, there is too much for one post.

But before I go, did you know that Quintana Roo is Mexico’s youngest state, just granted statehood in 1974?  Did you know that Chetumal has an international airport (or so it’s called…I only see flights to Cancun or Mexico City)?  Did you know that the 1840s revolt of the indigenous Mayan people against Mexican rule (known as the Caste Wars) drove all the Hispanic people from the Chetumal area?  And that many of them relocated to Ambergris Caye and Belize?

4 thoughts on “Chetumal: Another World Just Over the Border – Part One”