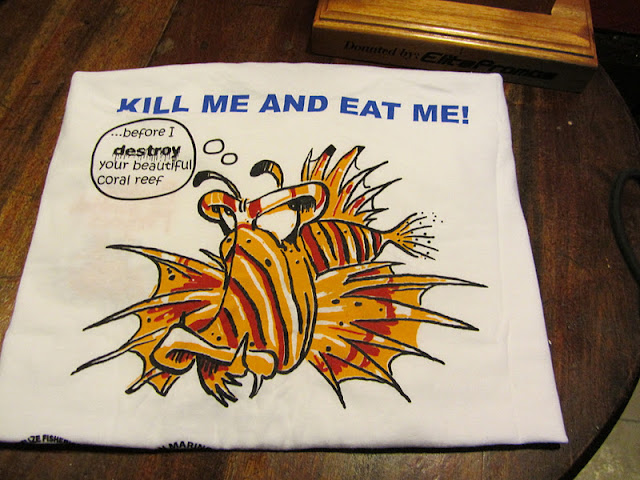 What is one of the most dangerous and dreaded fish in the Caribbean Sea?  Bull shark?  No.  Moray Eel?  Nuh uh.  It’s the small, beautiful but hated lionfish.  Popular in aquariums and native to the Pacific Ocean, it’s believed it was unintentionally released into the Atlantic in the mid-90s.    And with no natural predators (except for the occasional lion grouper) and the fact that they breed like rabbits, they are now everywhere.  They have evil looking venomous barbs and are harmful not only to people but fish and the entire reef ecological system.  Sorry you evil little buggers, even at Christmas, we will show you no mercy.

Local divers and fisherman went out spear fishing yesterday to jab as many as possible.  One diver told me that they are not many in areas with lots of snorkelers and divers but once you get away from the main hubs, in areas like Coral Gardens they are everywhere.  Groups around the Caribbean are promoting the killing and eating of these fish and San Pedro’s various tour and marine life groups are doing the same.  They are selling the uber-cute t-shirt above to support the effort. 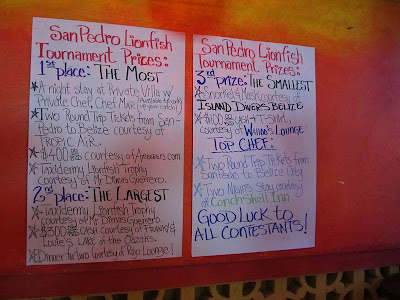 Today, Sunday, the lionfish cook-off starts at 4pm.  Come to Wahoo’s Lounge and taste the lionfish prepared different ways by different chefs.  Once those poison points are stripped off, there are some tasty little fillets on these fish. 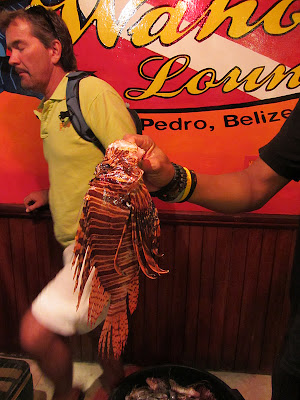 The fish were separated in small (un-fillet-able) and large like this guy.  They have creepy little eyes placed very close together on the top of their heads. 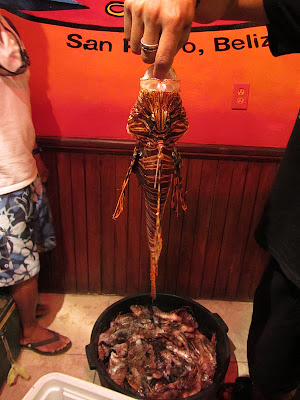 The winners were declared and posed for a picture.  The prizes were pretty darn good, both for Saturday’s competition and Sunday’s Top Chef battle.  Why not hit one of the many Sunday BBQs (Caribbean Villas or Crazy Canuck’s have great ones) and then stop by Wahoo’s for a early evening lionfish dinner?  It should be quite a party. 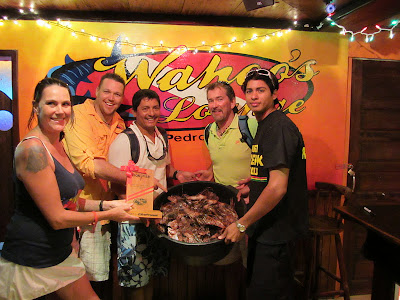 And then it started POURING rain for the 2nd annual LoveFM Christmas parade.  The kids were troopers.  Poor Santa, his suit must have been HEAVY soaked with all that rain.  He was still dancing away. 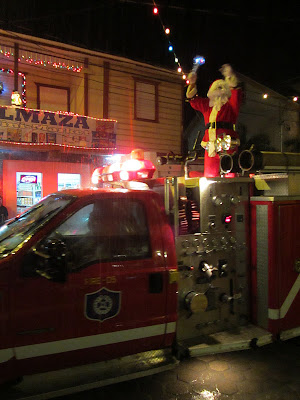 There are lots of great decorations in town. 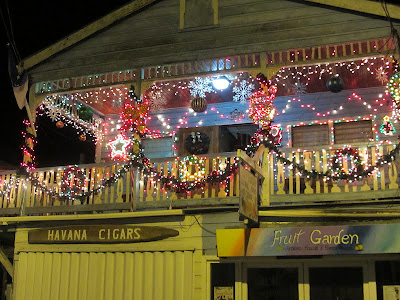 I apologize for my photos.  I am not good at night time photography but add in rain and moving kids…I’ve got no chance.  Particularly when I haven’t read the manual for my new Canon SX230 yet. 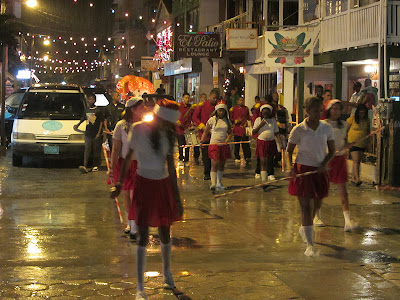 The little manger scenes were buckling under all the rain. 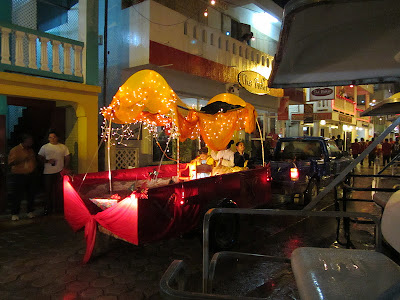 This little float contained a teen Santa dancing to the song “I’m Sexy and I Know It”.  Classic. 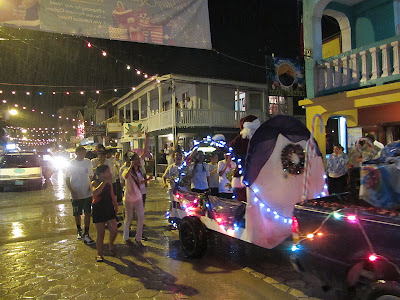 The parade ended, we had a few drinks at Croc’s Bar (the perfect place to wait for a parade) and then headed over for a quick stop at Roadkill Bar.  They were celebrating their 3rd Anniversary with live music, cake and hot dogs.  They had a pretty nice little crowd despite the inclimate weather. 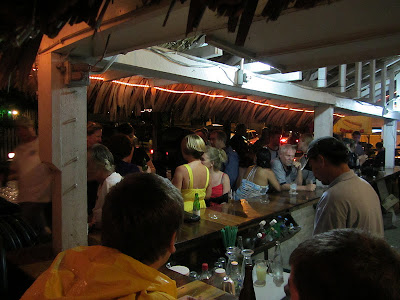 And the staff was working hard to get everyone served.  They had time for a quick pic. 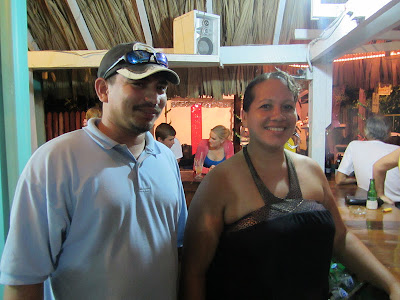 I had time to try a Corn Dog Bite prepared by Dan of Island Dogs.  Quite a tasty lil nugget particularly when smothered in yellow mustard, my very favorite condiment.  Did you know that Island Dogs is opening a shop/small restaurant in the Spindrift Hotel soon?  It will be on the street side with a window so you can walk right up and order a dog.  They also grill every Wednesday night at Roadkill Bar. 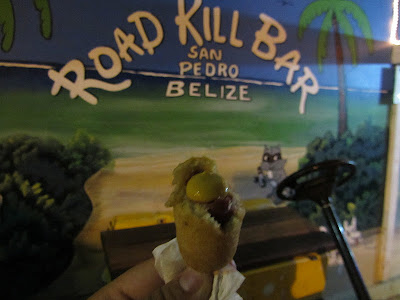 The band was sounding great.  It was headed by a guy named Pineapple Willy.  Well, I’m guessing that name is not what his mom called him.  He played with Drummer Dan, Derrick and Barefoot Skinny.  I am starting to feel like I need a nickname.  One that is not “SanPedroScoop Girl”.  Feel free to comment with suggestions.  Also, no CrabApple Becky please.  Or Breadfruit Becca. 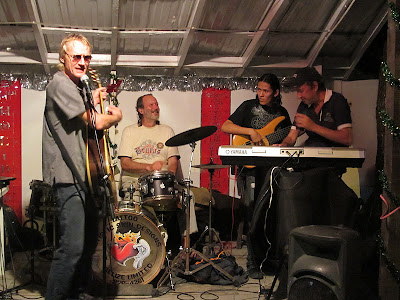 Wade the Gringo made some super cute hamburger cupcakes.  Totally impressive.  But some reason, I was too scared to tasty. 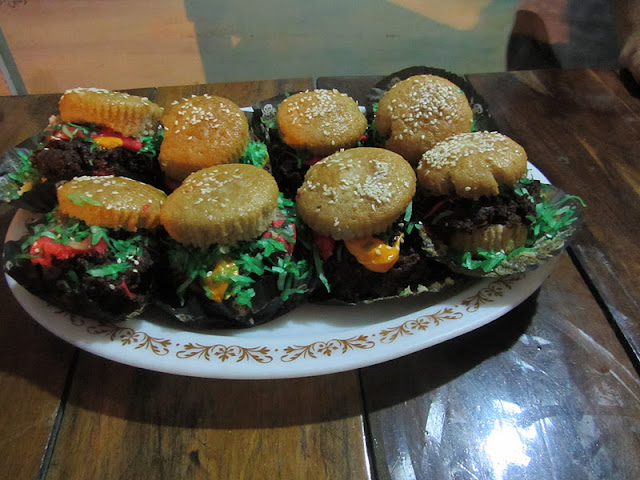 Something that you should know…Wade does really good burgers at Roadkill on weekends.  And does a Kids’ Meal with burgers and fries for only $7bzd.  AND YOUR KID GETS AN OLD SCHOOL REAL McD’s TOY!  Look at these things…they   are   awesome.  Ones from Disney movies of days past like The Hunchback of Notre Dame or 2009’s forgotten Astroboy film.  Total collectibles.

Next weekend’s toys have a Barbie theme. 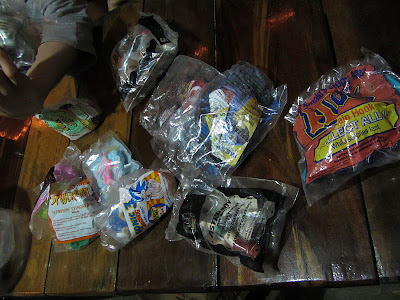 Kids would LOVE them.  And the burger and fries as well.  You can check out June’s review of Wade’s burgers here:  Two All Beef Patties, Special Sauce, Lettuce, Cheese…