And what a cool thing to be invited to.

There is an election coming up for a new Mayor of San Pedro in March. And it’s a pretty exciting thing for the town for a few reasons.  First, the current mayor has been in position for 2 terms and has been the subject of quite a bit of negative controversy over the past years.  I think, people are excited about a change.  Second, this election will not be only Red (UDP) vs. Blue (PUP).  This year there is a very viable Independent candidate (Purple!) that has the potential to shake things up.  And lastly, there seems to be more real dialogue about issues.  And that is where this debate comes in…

I am not a politico by any means.  But, I have lived here for over five years, I love the town and its (sometimes crazy and complicated) inner workings and I really love the fact that it feels like an individual can have a say in what happens.  A very different feeling than voting in the US where your vote is one of millions.

So…while I could write a book about my opinions about this event, I am not going to get into it too deeply here.  Heck, it’s not really my place…but let me give you my overall experience. 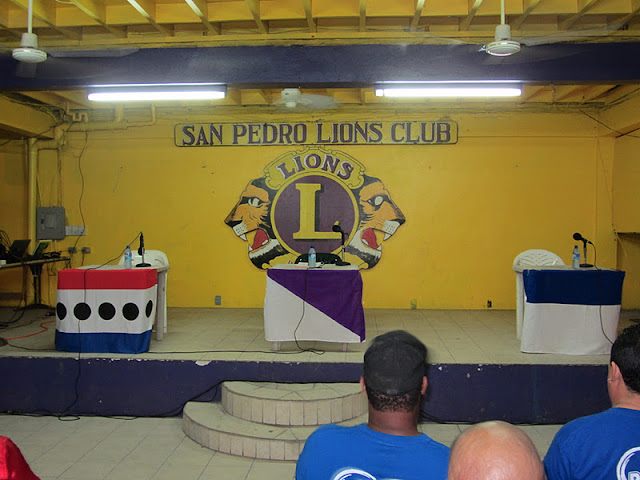 I arrived at 6:30pm for the 7 o’clock debate and there was quite a police presence.  I would guess about 10-12 officers (one third of the SP force!) were securing the area.  I’m not going to lie…this was getting me excited. 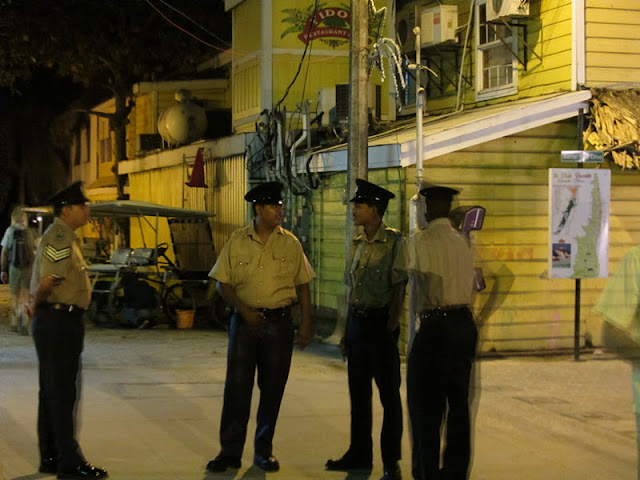 The front rows were filled with the party supporters, each team wearing full party colors.  I will definitely give the prize for Most Timely and Most Organized Group to the PUP.  They were there early, they appeared as a group, they even had a guy who brought them water and snacks during the long debate.  (Ms. Conchita Flota, the PUP Mayoral candidate is the pretty lady with the short hair in the second row center.) 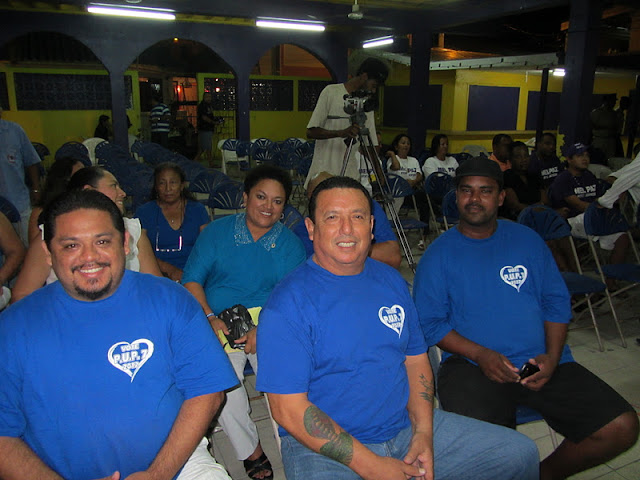 Purple (the Independent crew) was there in smaller numbers.  I’ll definitely give the prize for best T-Shirt and Best Slogan Idea to Mel Paz’s Independent group.  In a (worldwide) political world filled with empty promises and sneaky politics, this hit home. 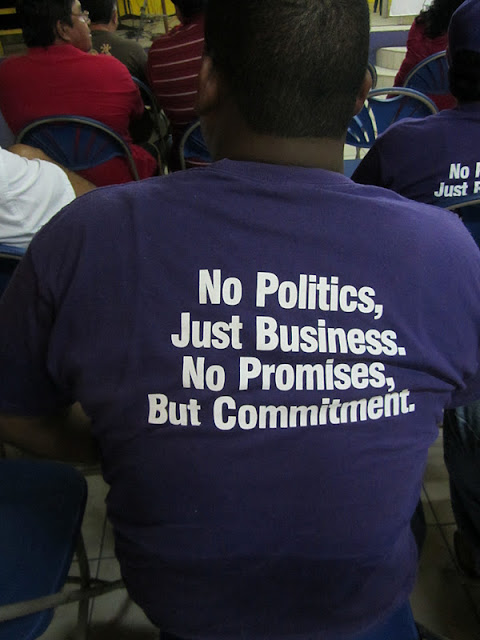 Each mayoral candidate was wearing full party colors as well.  I am always impressed how, for 4 or 5 months, these guys wear only blue, red or now, purple.  That is some serious shopping.  And leads me to my next award.  Best Dressed Candidate: Mel Paz. 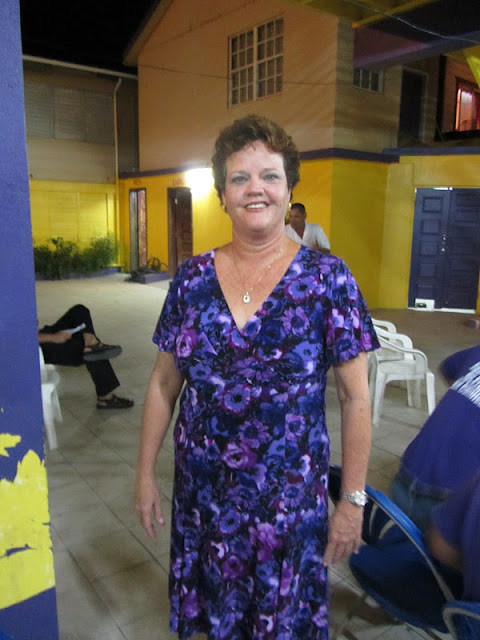 The debate was about to begin.  The rules were explained extensively by the two moderators, Tamara Sniffin and Eiden Salazar.  No applause, no comments, no alcohol.  All to insure that “law and order were maintained”.  Here are Tamara and Eiden before the proceedings. 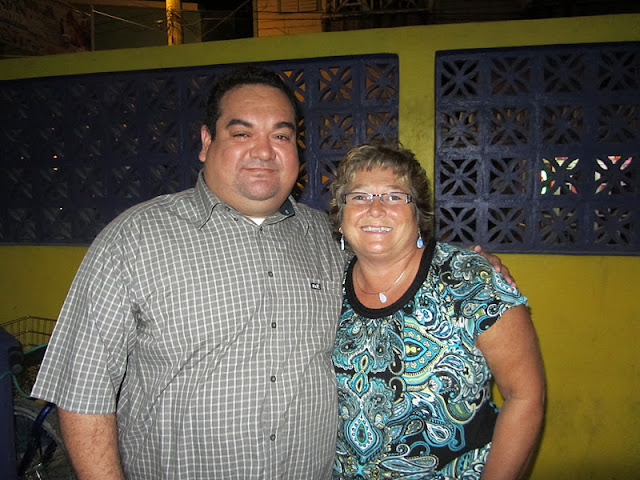 There were 13 questions in all.  Each question had too many parts, was too long (I am sure that will be tweaked for the next debate) but they covered all the basics:  finances, health care, crime, education, the Clock Tower, the environment.  The candidates were asked to addressed all the issues.

By the way, there was a serious peanut gallery outside the event for most of the night. 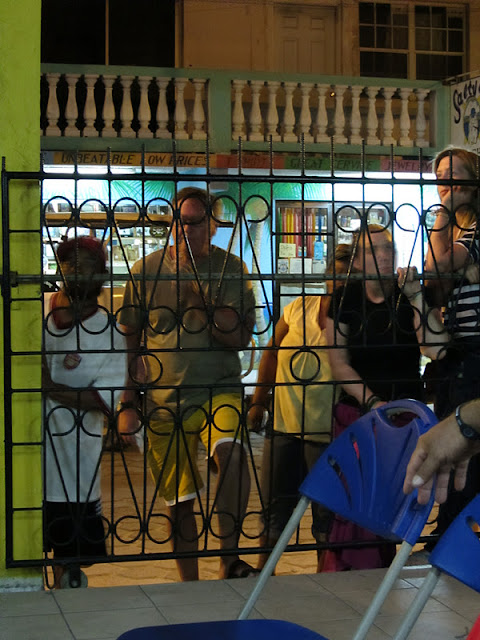 The Lions Den was pretty full once the debate got going. 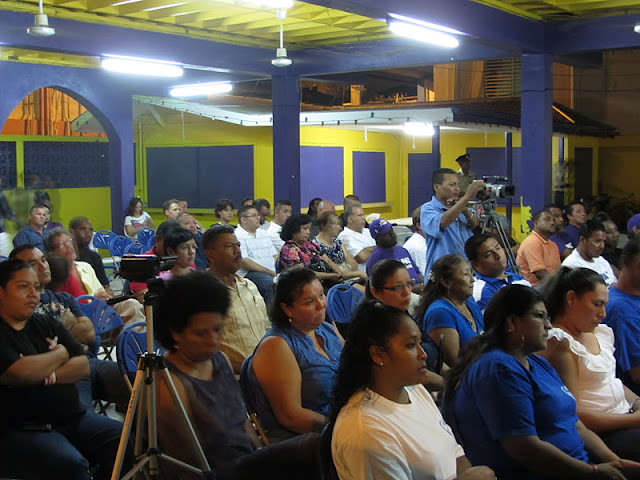 I definitely don’t want to get into each platform and the specifics of each answer but here are a few things that struck me during the debate from each of the candidates.  Let it be said, I respect each and every one of them for standing up for this very difficult job. 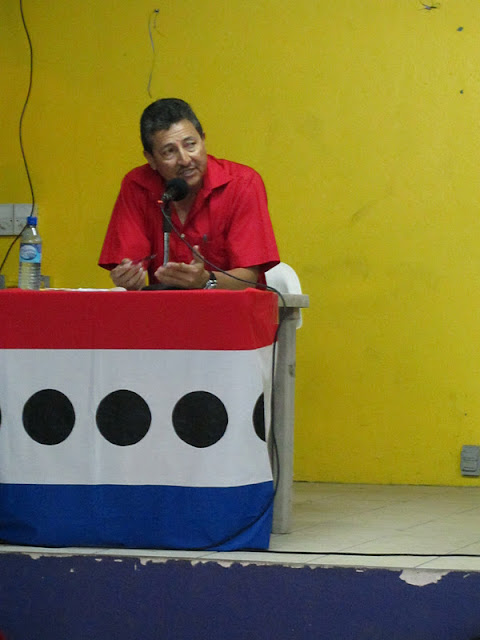 He was the only candidate to speak half in Spanish and half in English, clearly speaking to his old school San Pedrano constituency.  He mentioned a number of times about the problem we are having in this town with the Internet.  About negative Internet.  I’m not sure that shutting down free speech is the answer to any of our problems.

Ms. Melanie Paz (Independent candidate):  Melanie took a different approach.  Less appealing to family values and old-time San Pedro and more to looking at the town as a business.  Her comment that “maybe it is time to ruffle some feathers” really resonated with me.  (As both a US citizen and a Belize resident.)

And with that, I can declare a winner.  Based on most enthusiasm, most new ideas, most powerful argument and actually answering the questions:  Mel Paz (Independent candidate).  Whether you agree with me or not, this was a really good event for everyone.  Discussion is a great thing!  To just have the candidates sit down together is powerful.  To learn information like:  Ambergris Caye pays 1/4 of the hotel tax in this country but only receives 1% of tax allocation from the government…well…it makes us all smarter (and hopefully a bit mad).  We will all be watching the next debate on February 13th.

Congratulations to Tamara Sniffin of the San Pedro Sun and Eiden Salazar of Reef Radio for organizing this event.  I say…it was a pretty gutsy move and obviously required lots of coordination.  Good job.  And the event went SMOOTHLY.  Not even a hiccup.  Congratulations to all of the candidates.  That is not an easy thing to do.