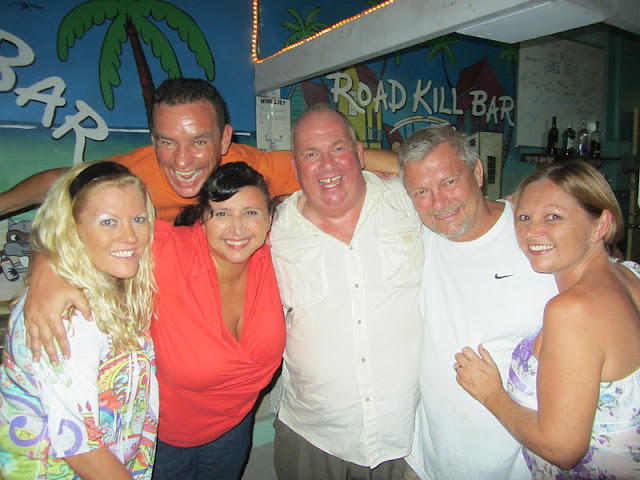 Get ready for LOTS of pictures.

Since I have just recently become a mild fan of poker (see:  The Poker Bug), I decided to join some friends for a poker run.    For the past few years, local bars have been organizing the event to get people to visit more places, to have a little fun, to maybe win a bit of money and well…to drink a whole bunch.

Here is the deal.  There are 5 different pub stops.  At each of the first four, you receive a card.  At the last stop, five “group cards” are revealed to the whole crowd.  Choosing two from your own cards and three from the “group five”, the best hand in the crowd wins.  Got it?  Yeah…well…doesn’t matter.  It’s a game called Omaha and pretty much insures that everyone is in it until the bitter end.

Last night all forty of us started at Pedro’s Inn.  Here is their signature wall decor. 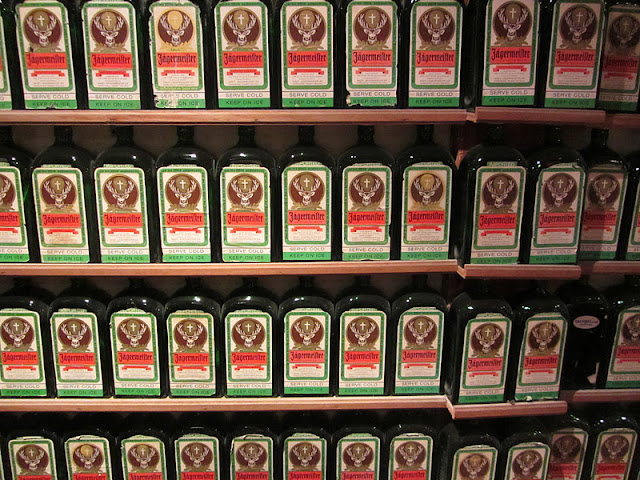 And the lovely bartenders serving a very thirsty crowd, Carrie and Cindy. 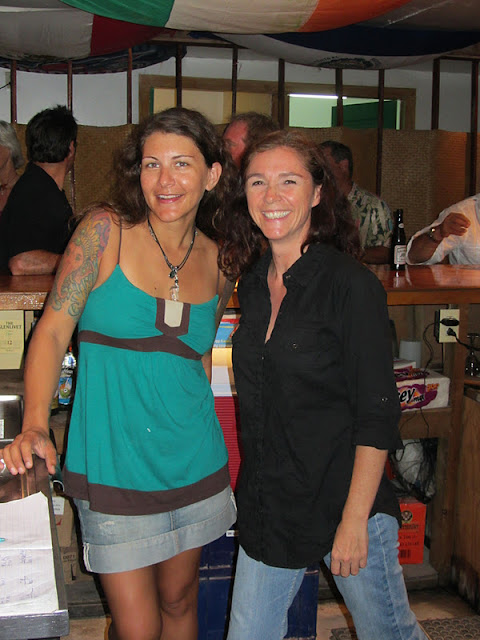 I was also able to figure out where Santa vacations after a hard holiday season of toy making and kid judging…or maybe it’s just a retired member of ZZ Top. 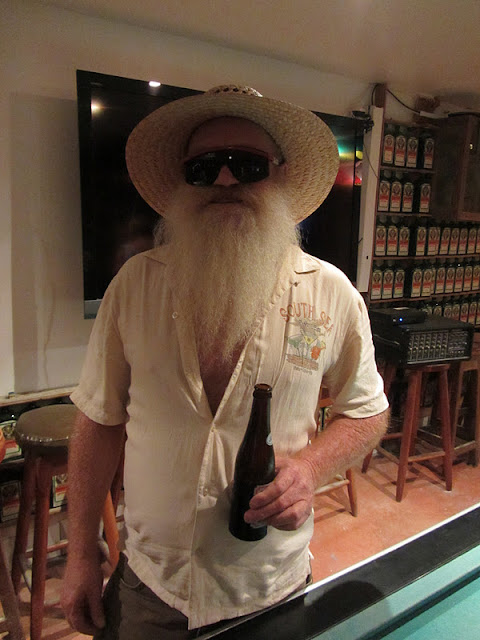 Eiden (of my favorite TV show “Good Morning San Pedro”) and his wife.  She owns a beauty salon on Middle Street.  YOU SHOULD SEE HER NAILS.  They are gorgeous.  You might want to stop in… 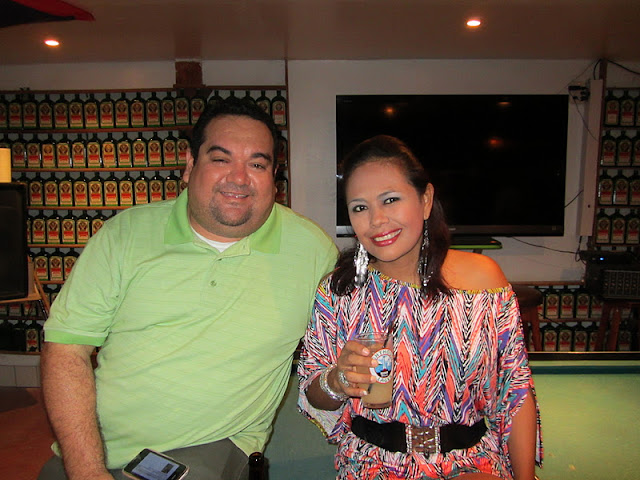 Ok…on to the next bar.  I received my first card. 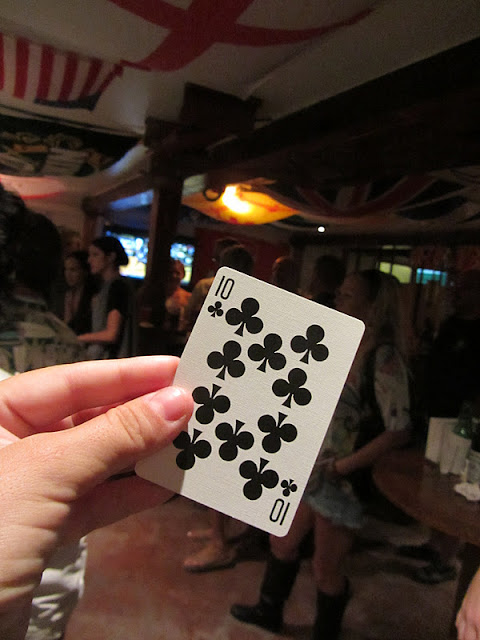 Next stop?  Wayo’s Bar.  If you are visiting San Pedro, this should be in your top 5 checklist.  Great location on the beach just north of town, fun staff and the owner is the best.  One of the nicest guys on the island.  (Plus, I have a very soft spot for a Yankees fan.  They can do no wrong.) 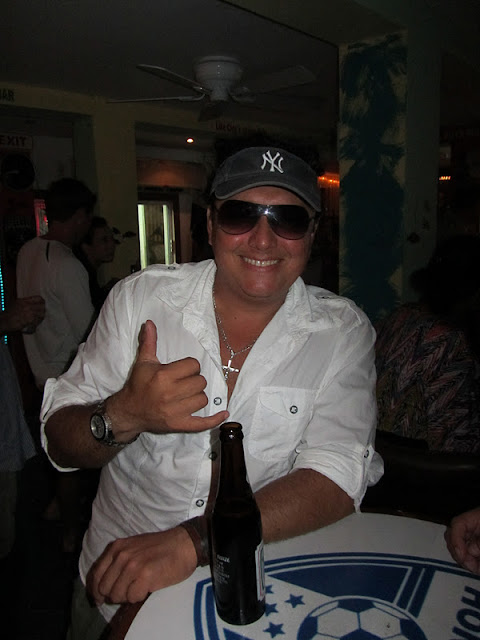 And here is his bar. 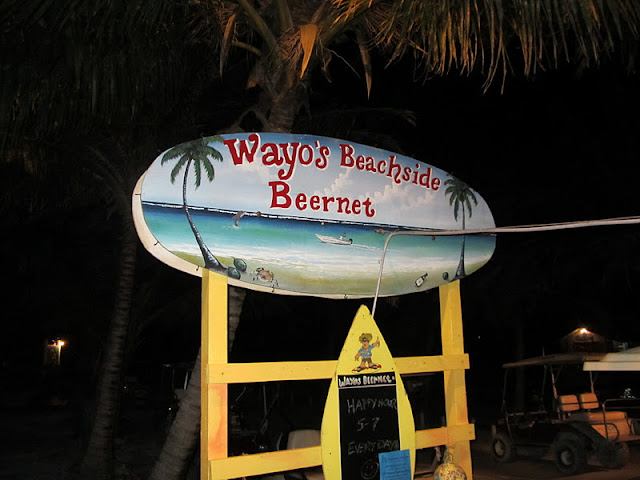 This picture is a bit psychedelic due to my poor night time photography skills.  But you get the idea…very cool bar right on the beach. 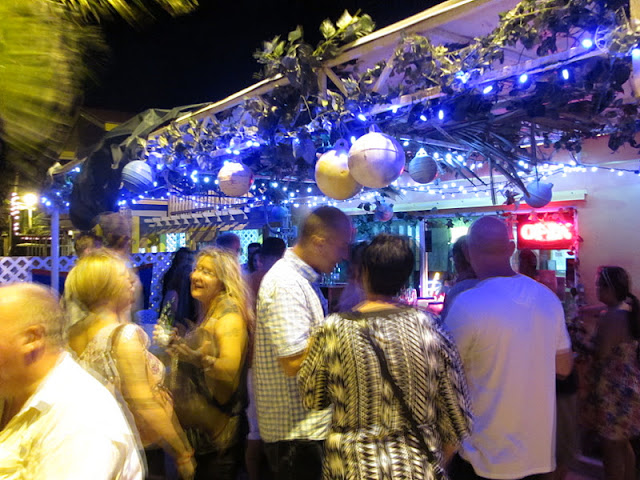 Wondering what my next card was?  I was feeling pretty good about that. 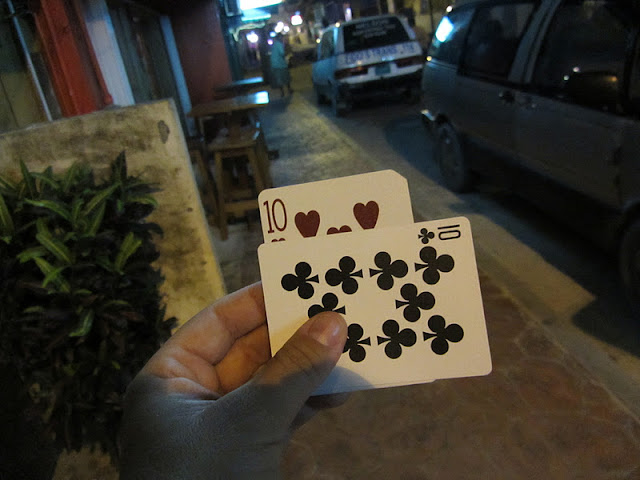 On to the next place.  Lola’s Pub (at the very north side of Front Street across from Belize Bank.)  They also sport a pair of lovely bartendresses. 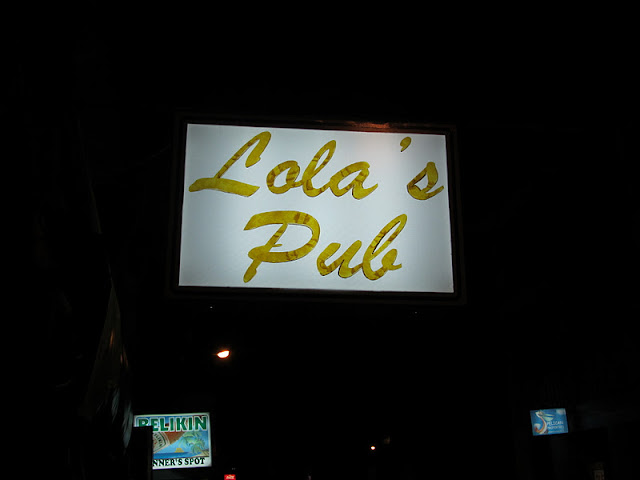 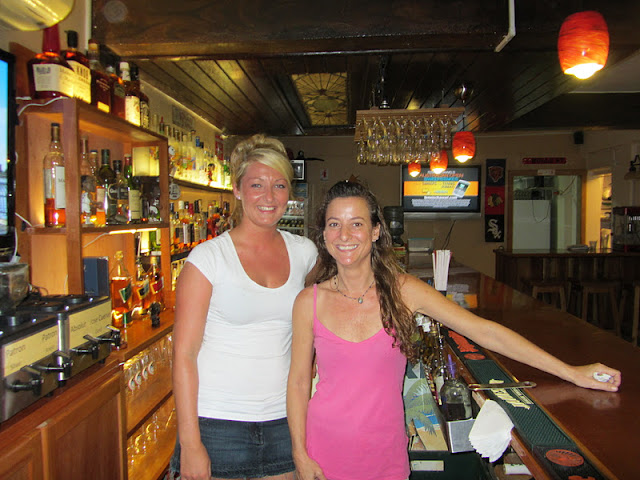 One more card was dealt…and guess what I got…another 10 of Clubs.  But it didn’t matter.  Only two of my three 10s would count.  Oh well.  On to Croc’s Sports Bar. 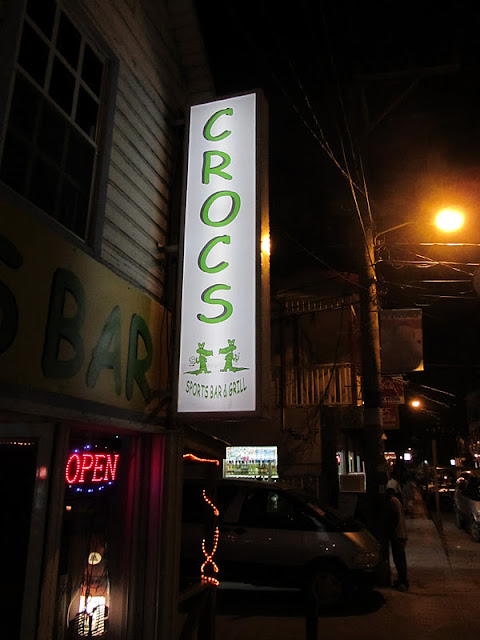 Here we picked up lots more people and…people started getting a bit nutty. 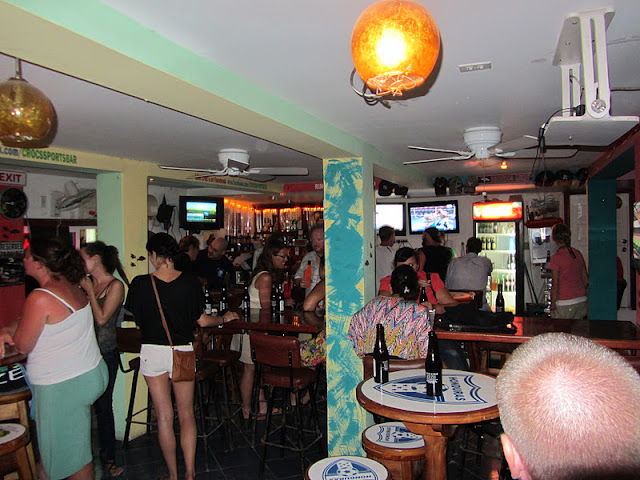 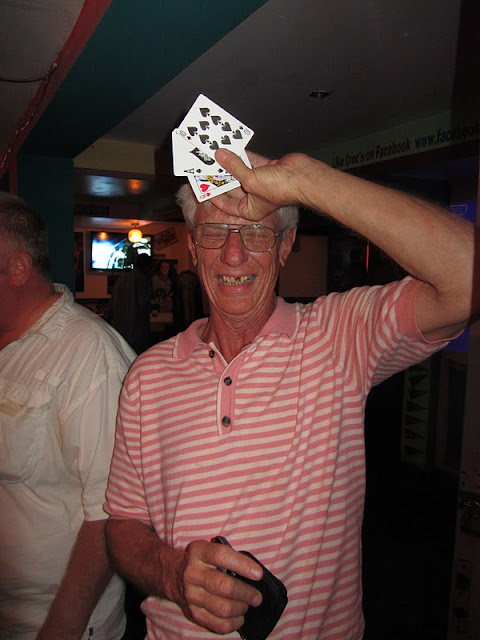 One more card…and on to the next stop.  Roadkill Bar.  Lots of people were picked up on the way over.  In fact, I was sandwiched between two Australian guys in the golf cart.  Here they are.  (With Denny in between.)  Not such a bad deal. 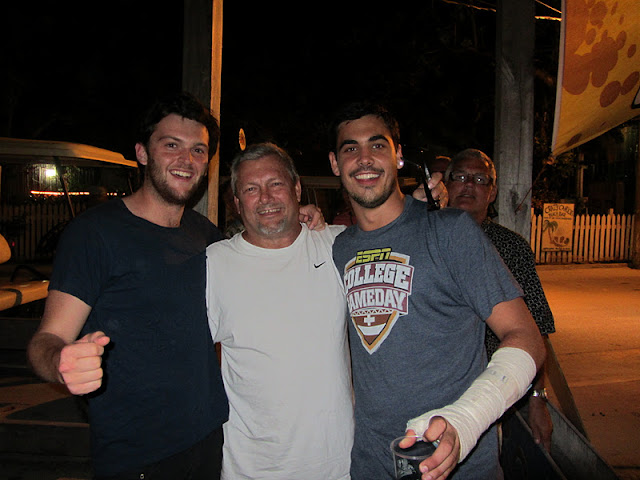 After a while, Robbie called out the final five cards…the ones we would be sharing.  Here I am working out my hand. 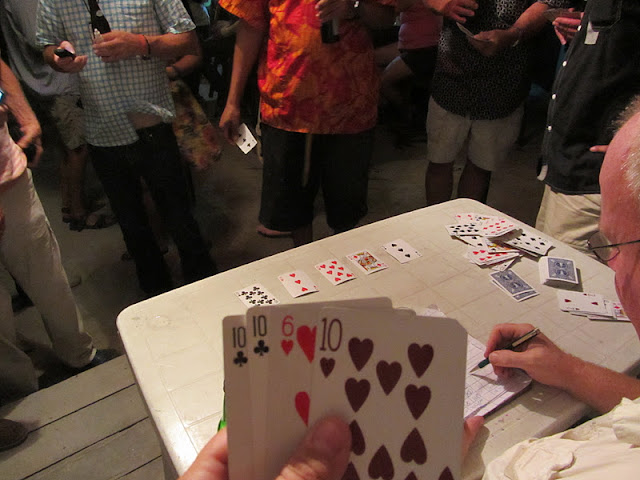 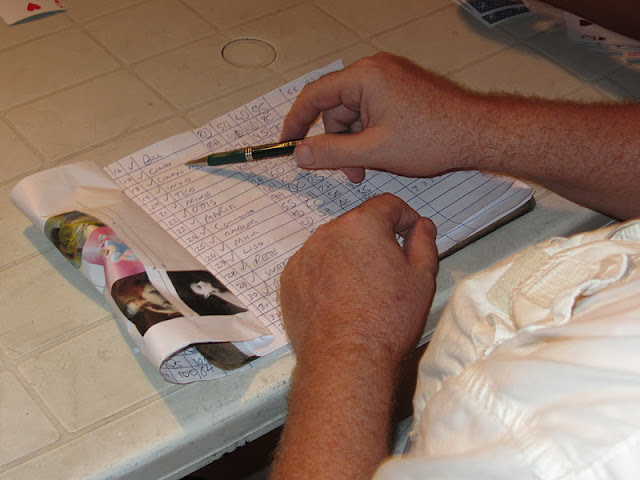 I had a full house.  Three 10s and two 3s…good…but I didn’t win.  It ended up being Walter from Pedro’s Inn. 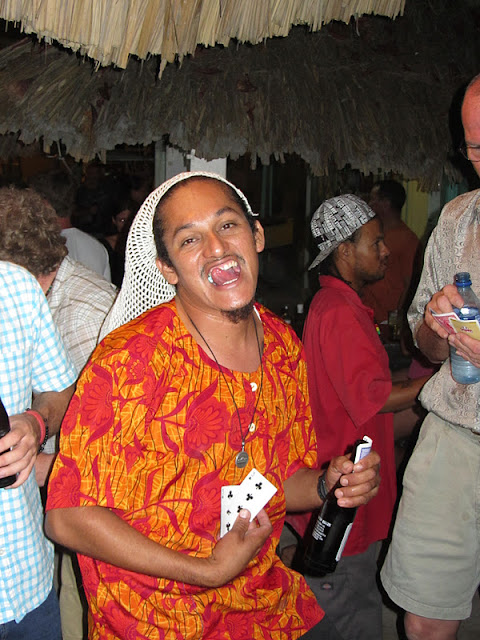 Four of a kind?  I wasn’t quite sure what was going on…

But a very fun night.  Winning isn’t everything.  Let me leave you with a few more pictures. 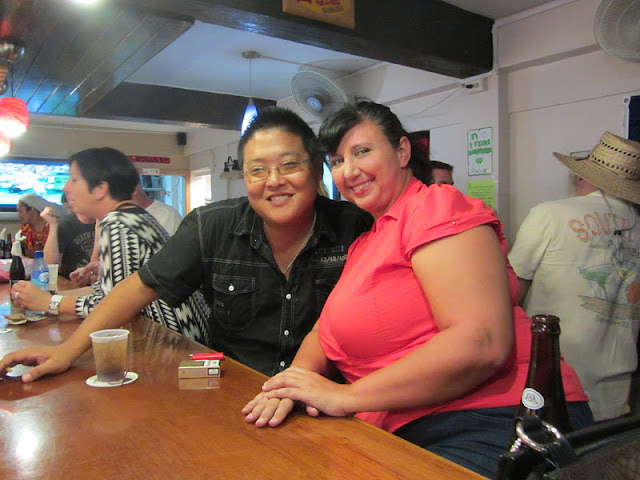 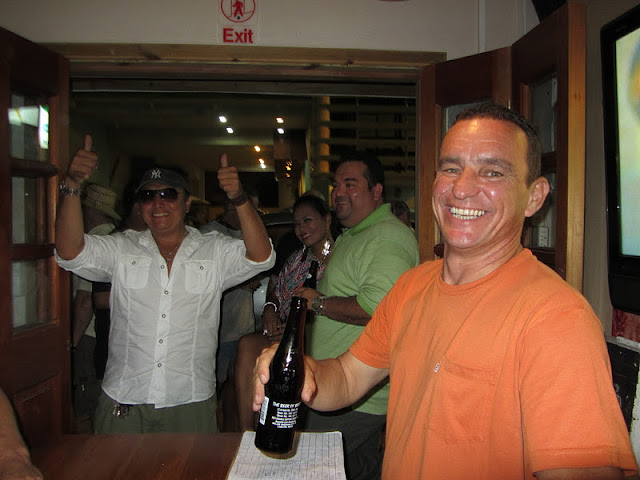 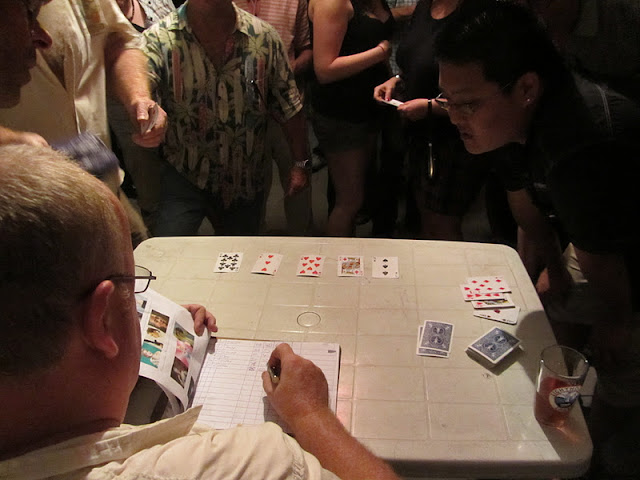 See you at the next poker run?