Wine De Vine always has a very popular Friday night event where people get together, sip (or guzzle) wine and eat cheese, pate and other goodies.  Yesterday, it was a full blown Mardi Gras party with free masks and beads… 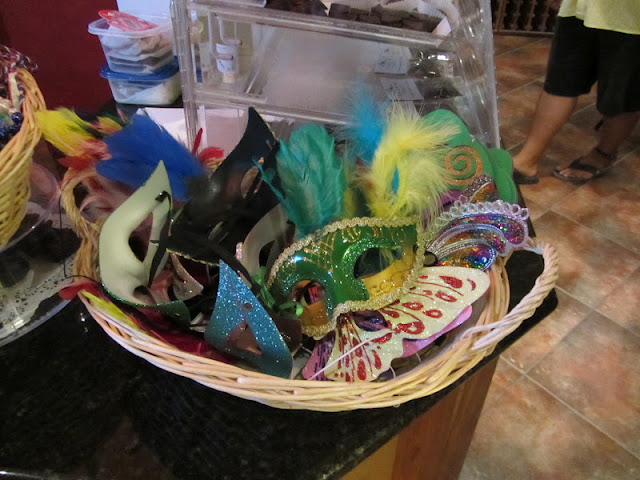 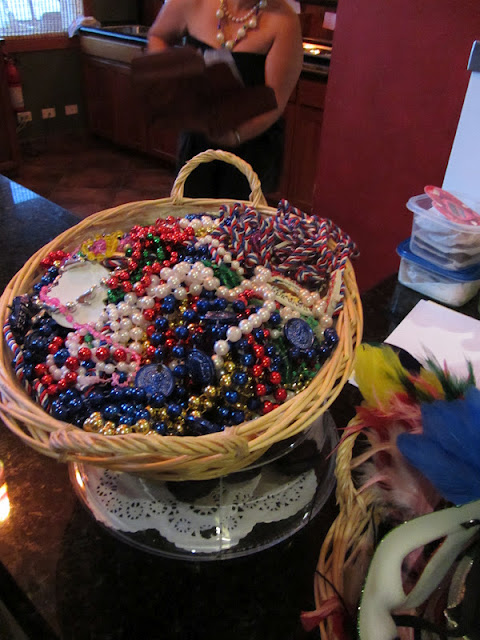 And, if you wore green, purple or yellow, you received a free glass of wine.  I think Maureen (on the right) won best dressed.  Her dress was the perfect combination of all three. 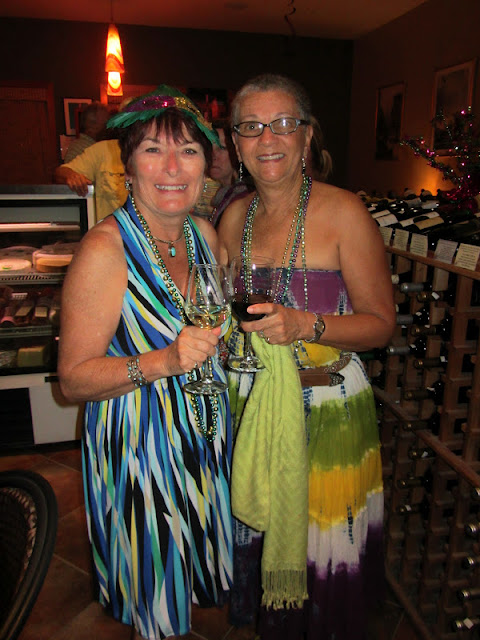 There was live music and a local dance troupe did a short cultural performance.  They were really good and very festive. 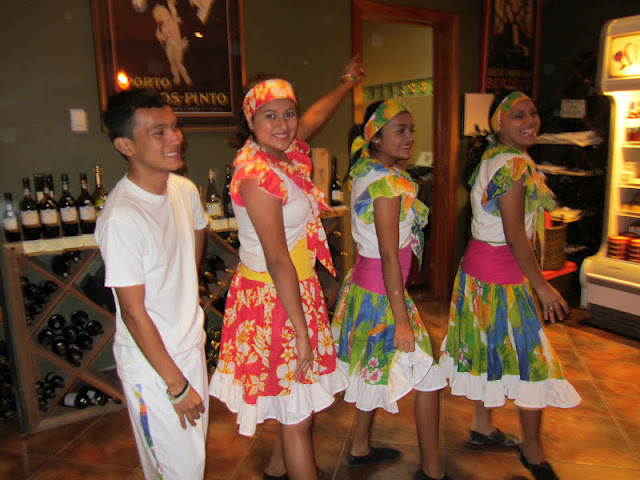 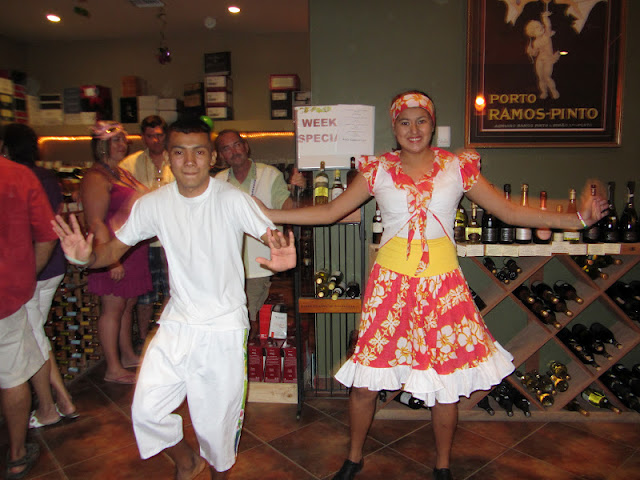 After the show, WDV served an amazing buffet of cheese, bread, dips, olives, pates and meats.  I forgot to take a picture…I was too busy stuffing my face with these rare island treats.  But you get the picture… 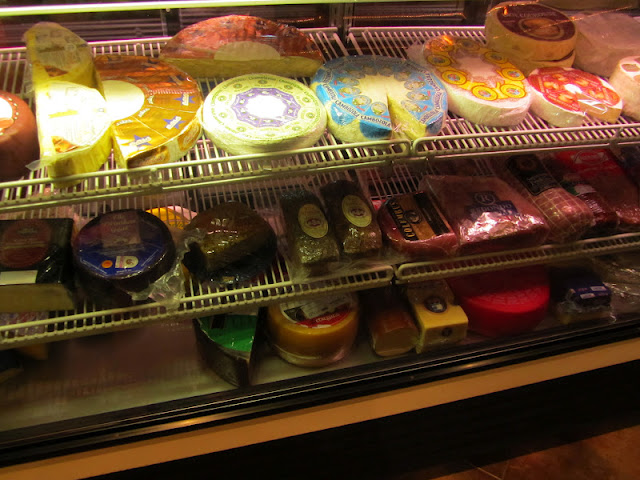 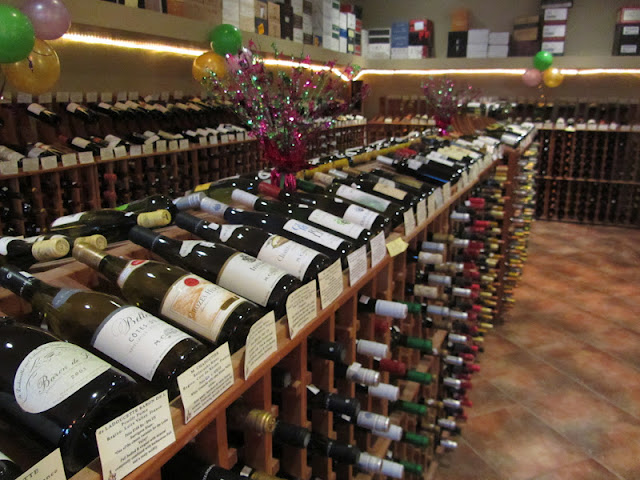 GREAT party, Wine De Vine.  And for all of you that have never been, stop by on Tuesdays or Fridays from about 5pm to 8pm for a glass of wine and delicious food…they always have a crowd.

Eeek!  Do you recognize this masked reveller? 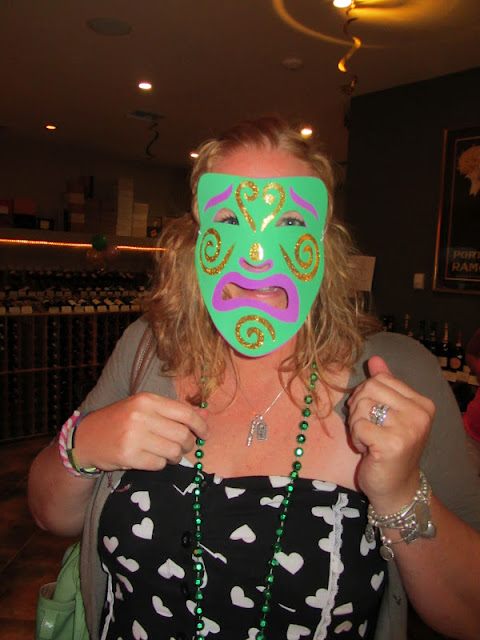 Off to Pedro’s Inn to see Gino and the Shackshakers perform.  They play every Friday night from about 7:30pm.  Gino has been on the island for about as long as I have.  When I first came, he was the “house band” at Fido’s and now he plays at different bar and restaurants all through the week.

They had a pretty good crowd when I arrived. 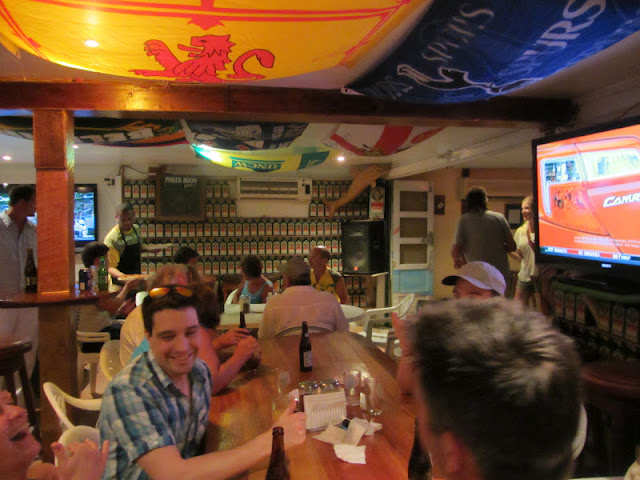 We had some MORE food before the music started.  Walter prepared a huge lobster plate with the last of the season’s lobster (fear not…it was caught last week.)  Impressive. 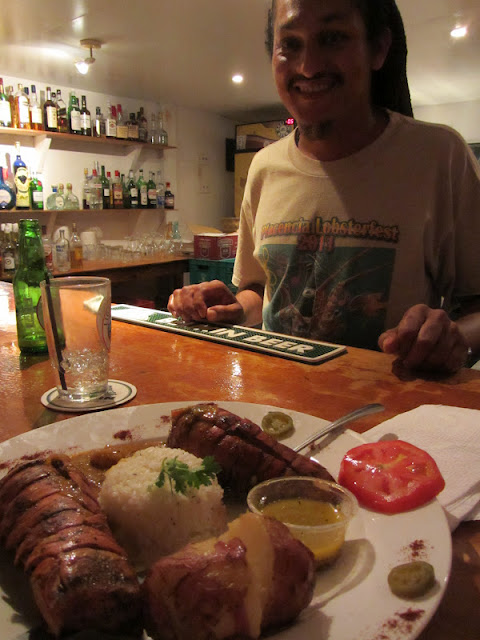 And if that wasn’t enough…why not polish off a pepperoni pizza too?  Pedro’s has what I think is the best pizza on the island.  The dogs played a large part in clearing this plate.  Thanks Charlie and Jambo. 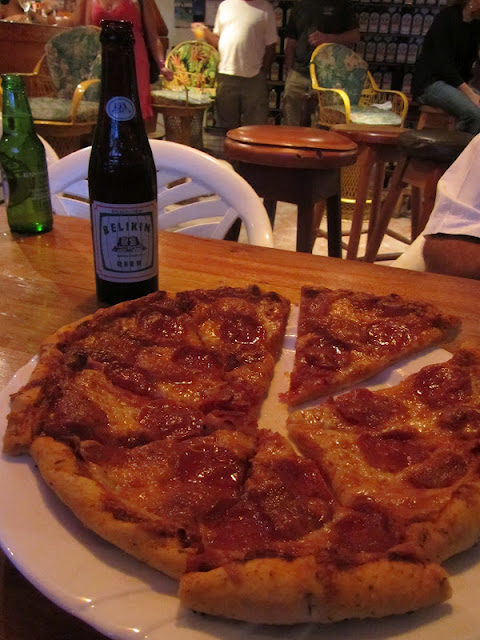 I even rang the famous bell at the corner of the bar.  Ring it and you buy everyone at the bar a shot of Jagermeister.  Sounds like a good idea…until your bill arrives. 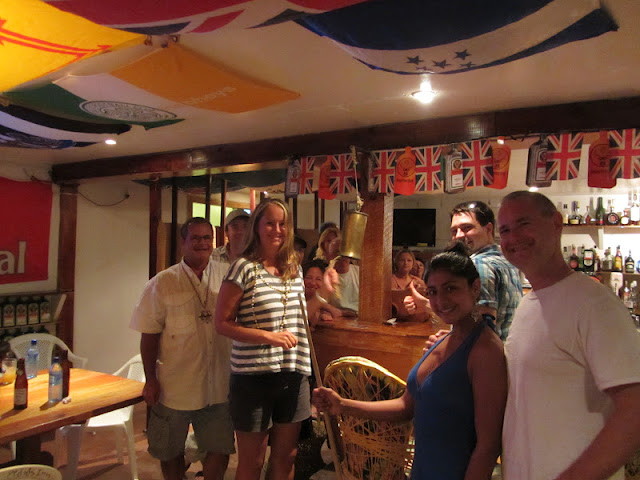 24 shots being served from the Jager chilling machine. 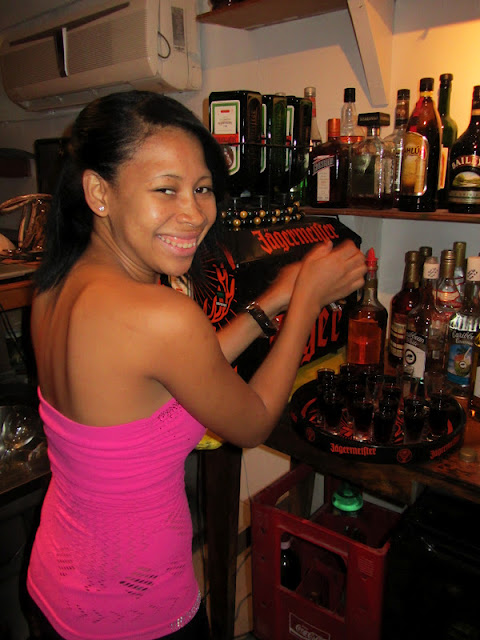 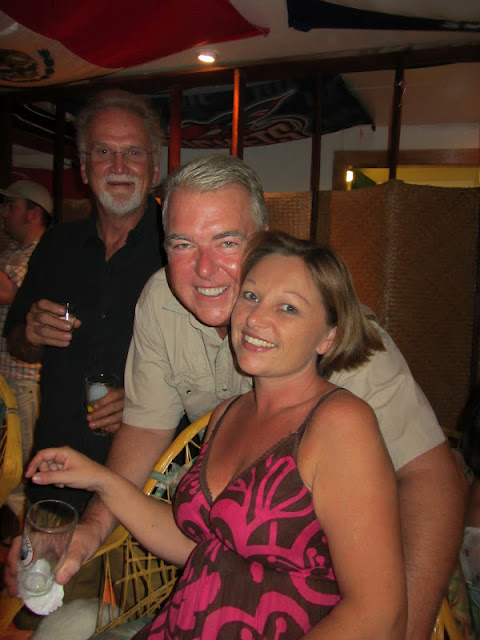 Peter/Pedro shouted to get everyone’s attention and to give a toast.  It was something about how SanPedroScoop is the smartest, most beautiful thing he’s ever set eyes on.  He mentioned that she also has the best website on the island.  Or something like that…I couldn’t make the exact wording out over the roar of the crowd. 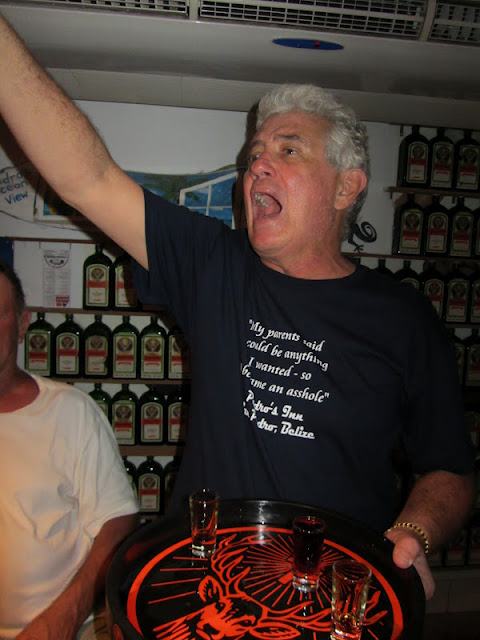 Gino, Drummer Dan and Derrick started up.  Gino sounds great.  A pretty big range of music…from Bob Marley to Billy Joel to the Rolling Stones to Sublime.  I think there is something for everyone. 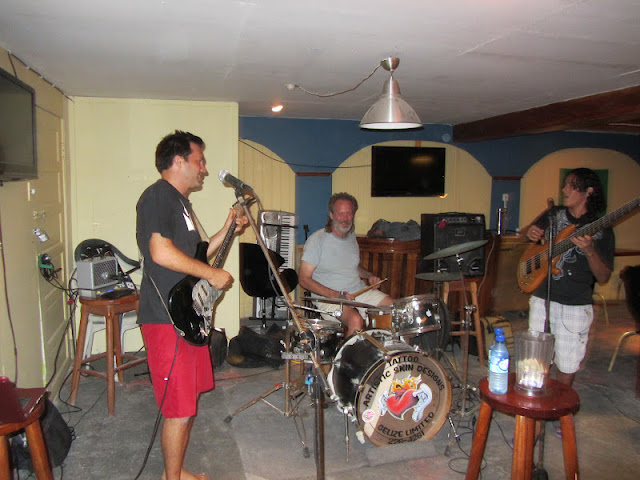 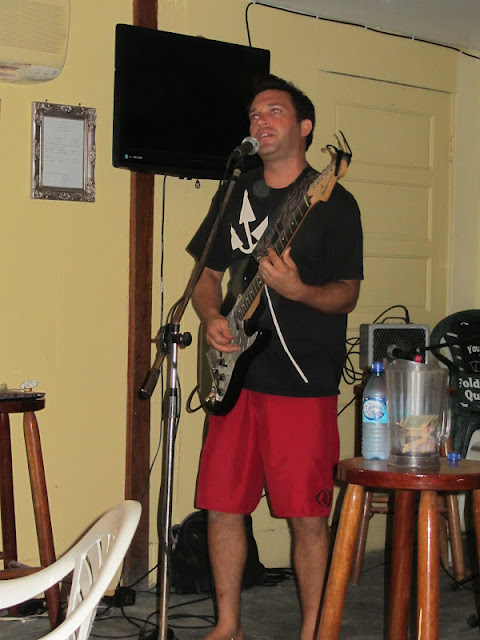 Thank you Peter for actually buying the 24 shots and letting me ring the bell.

Carnaval in town starts tonight.  Saturday, Feb 18th – the 3rd annual Carnaval Fiesta at Central Park with the Miss Carnaval Popularity Contest, Local Dances and Surprises and the band, Rompe Raja.  Sunday, Monday and Tuesday will be the comparsas and the painting.  Get ready for it.

Here are some pictures from the past few years. 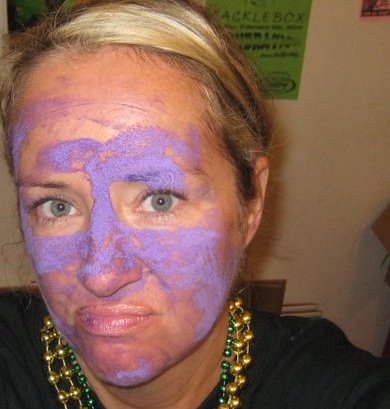 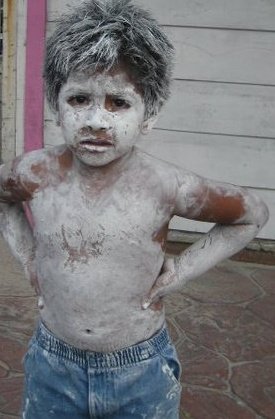 And always my favorite… 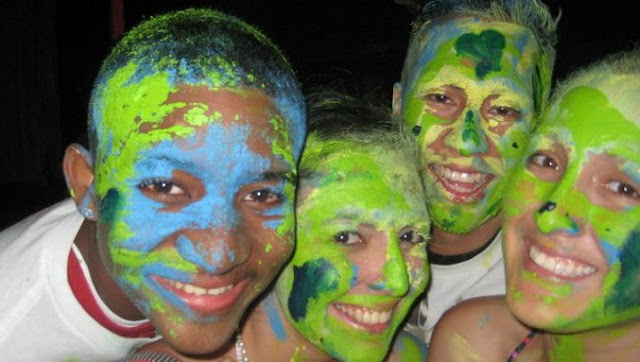 2 thoughts on “Getting Ready for Carnaval: Friday Night in San Pedro, Belize”