Quick note:  This is my second post of the day, if you missed the earlier one about my trip to see the Jade Head of Altun Ha, check it out here:  Museum of Belize.

Last night, Reef Radio and the San Pedro Sun newspaper hosted the first ever Area Representative debate between the four candidates running in the March 7th election.  A few weeks ago, the mayoral candidates had their first debate (see:  History Made) but this meeting was better and more exciting in so many ways.  The questions were shorter and to the point, the representatives were allowed time for rebuttal, all reps were very well spoken.  Instead of just vague, lofty ideas and promises, real facts and action steps were discussed and for the most part (though not all of the time), the questions were actually answered.  And the venue (the conference room at the Sunbreeze Hotel) was quieter, acoustically better and much more conducive to this sort of event.

I think that there were lots of great points made by all and I hope voters were listening with open minds and not just thinking in party colors.

As I stated in my post on the mayoral candidates, I will try to stay impartial (though we all know that is impossible).  I love politics, I am fascinated by the inner workings of this town and this country and I do love the fact that each vote REALLY does make a difference.

With that said, let me introduce the four debaters in the order I photographed them.

First from the two main political parties, Ms Patty Arceo of the People’s United Party (PUP) and the incumbent Manuel Heredia, Jr of the United Democratic Party (UDP).  Both were born and raised in San Pedro and have been involved in politics for some time. 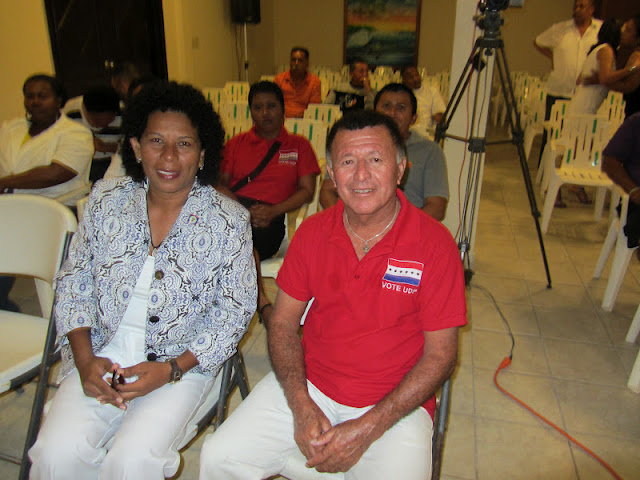 And newer to the political arena, Mr. Bobby Lopez of the VIP Party (Vision Inspired by the People).  Mr. Lopez is the founder and owner a very successful country wide business, Hummingbird Furnishings. 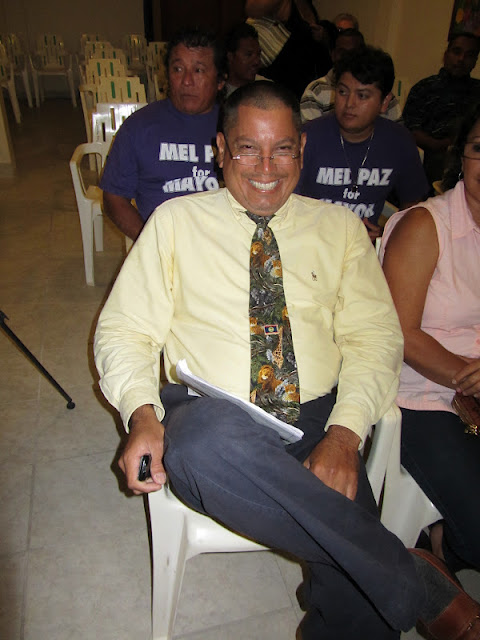 And then Mr. Mike Campbell.  He has been a citizen of Belize since the early 1980s, has worked all over the country and is running under the Independent ticket. 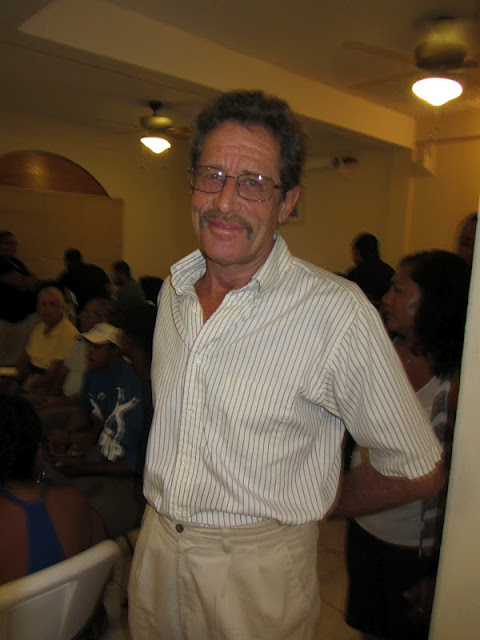 I won’t get into too many specifics but will just give my overall impressions.  San Pedro Sun will be providing a transcript for the entire event for those who didn’t get to watch, listen or attend.

The questions were really good.   Ranging from education to healthcare (Why don’t we have a 24/7 hospital yet?) to corruption (Have you ever given anything – land, citizenship or promises – to secure a vote?), they cut to the heart of the matter.

The techicians (Mauricio and David) fine tuned the mikes… 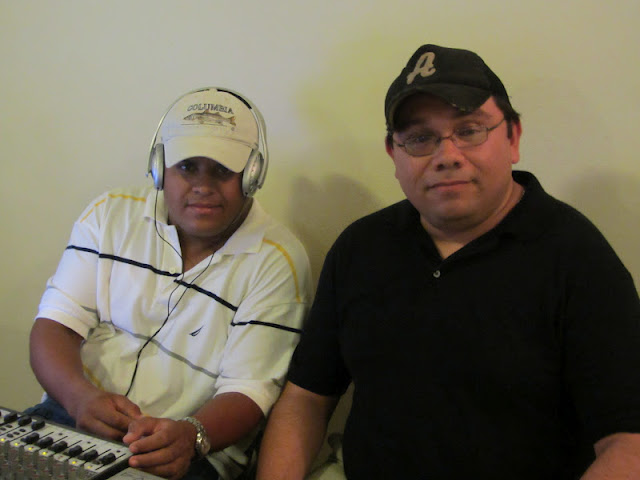 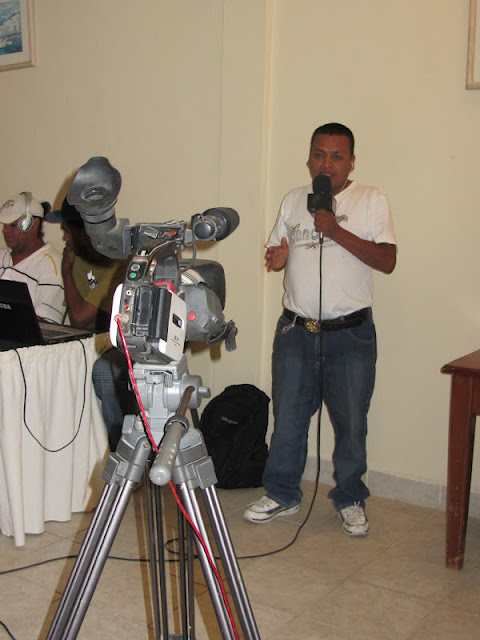 My impressions of the candidates:

Mr. Manuel Heredia (UDP) attempted to appeal to the old time San Pedrano constituency.  He spoke of his days as a fisherman when our town was a village.  He mentioned his governing and political experience again and again…from his time as Chairmen of the Fishing Coop to being the first UDP Mayor of Ambergris Caye.  When it came to issues like crime (more police), education (more schools), healthcare (a hospital), he said “life is real”.   We need to work with the limited money that we have and be realistic, the funds at this time just aren’t available.  He stated that he has never participated in corruption at all.  Ever.   He was definitely in the “hot seat” for the entire debate.

Ms. Patty Arceo (PUP) harkened back to the time that she and her party were in power.  She spoke of the many advances that took place from 1998 to 2003 (like the polyclinic) and implied that progress has been a bit stunted since then.  Of all the candidates, she was a bit more prone to sidestep the very tough questions.  Patty, though, is a very likeable person and that came through in all of her answers.

Mr. Bobby Lopez (VIP) should be a motivational speaker.  You could hear his sincerity and emotion when he said that we need change on this island.  That we cannot keep going as we are now.   Unemployment at 25%, cost of living and cost of fuel at all time highs, crime growing, he knows that it is his time to stand up.  He seems equally concerned about the quality of life of the residents (in particular the kids and young people) as well as making sure that this remains a top tourist destination.

Mr.  Mike Campbell (Independent) spoke of his success in developing Belize (from construction projects around the country to helping start and then expand the Free Zone in Corozal).  This knowledge of sustainable development, he stated, is critical since what we are doing now is “building Belize”.  For all our sakes, we need this island and Caye Caulker to be a sustainable developments.   Maybe we’ve had good intentions in the past, he said, but the past governments have made lots of bad decisions.  He spoke of the law, transparency and the need for campaign funding and land reform.  He spoke concretely.  For example,  we don’t have any way to airlift critically sick patients out at night?  All we need are lights on the municipal runway and Wings Of Hope can do it.  Easy fix.

I could go on for hours.  It got very interesting.

Eiden Salazar was the moderator and Mary Gonzalez of the San Pedro Sun posed the questions to the candidates. There was a good crowd.  As with the last debate, it was invitation only.  Each candidate is given 15 tickets for his or her supporters.  The town council, some private businesses and the media are all invited. 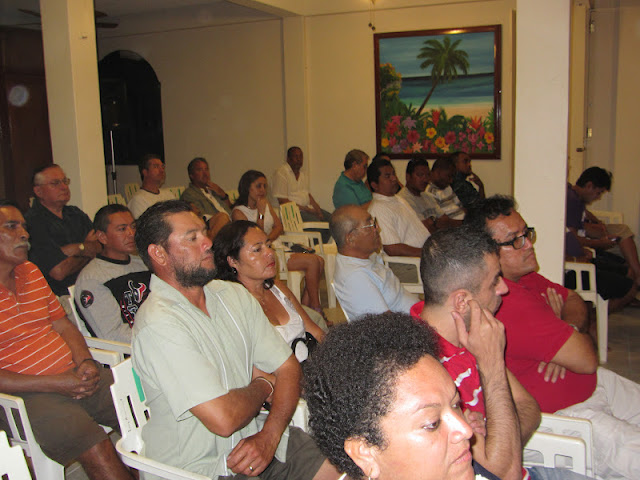 Based on my opinions (and NOT taking into account who I think will really win), I declare a tie for Debate winner between Mr. Mike Campbell and Mr. Bobby Lopez.  Mr. Campbell had clear, reasonable arguments, hard facts, concrete action steps and ideas that could really make a big change in this area if implemented properly.  Mr. Lopez’s enthusiasm, love of Ambergris Caye and Caye Caulker and its people was infectious.   His mantra of “change now” might be exactly what we need.  He sounds like a gentleman who will not take “no” for an answer.

Both men want to approach government in a more transparent, favor and corruption-free and business-like environment.

In the end, I really enjoyed the debate.  Just this sort of open discussion is always a step in the right direction.

Great work again Reef Radio and San Pedro Sun for organizing this event.  And don’t forget, election day (a public holiday) is sneaking up on us – March 7th.