On February 15th 2012, for the 10 year anniversary of the Museum of Belize, the crown jewel of Belize was unlocked from its vault and put on display for ONE DAY ONLY.  I had to take a trip to Belize City.The Mayan site of Altun Ha is located 31 miles north of Belize City and there, in 1968, an archaeologist from Canada made an amazing discovery.  The Jade Head along with forty other objects, had been placed within a large tomb that was located below the stairs in one of the temples.  The elderly adult male, probably an important ruler of the site during his lifetime, was buried with this jewel around 600 AD.  And remained untouched for over 1300 years.This one day exhibition and opening of the second floor of the museum was well worth travelling to Belize City for…

The museum is located in one of the colonial sections of the city in the old Belize City prison.  School kids were out in droves to see the jade piece. 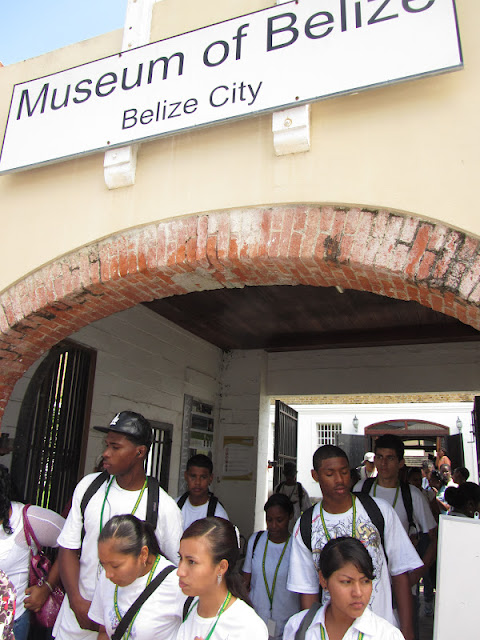 There was a large white tent on the front lawn to accommodate all of the large school groups and limit the numbers that were in the viewing room at once. 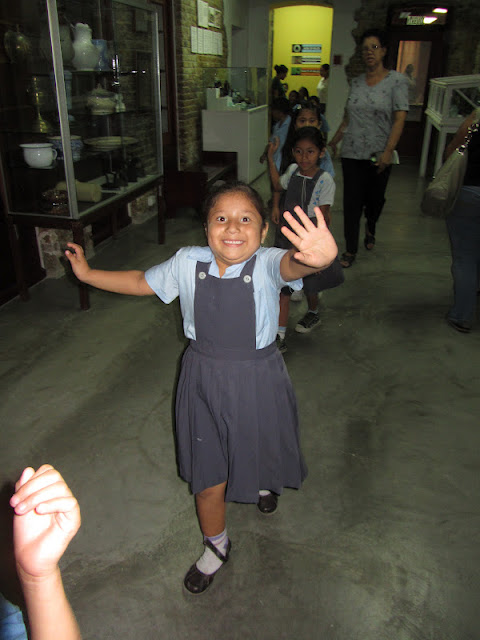 Entrance to the museum was free for the day for Belizeans and photography permitted as long as you had your flash off.  We went up to the second floor (always closed on my previous trips since that is where the most valuable jade and pottery is kept – there is just not enough security).

THE JADE HEAD!  Weighing almost 10lbs and about the size of a baby’s noggin, the head of Altun Ha remains the single largest carved jade object ever discovered in the Mayan area. 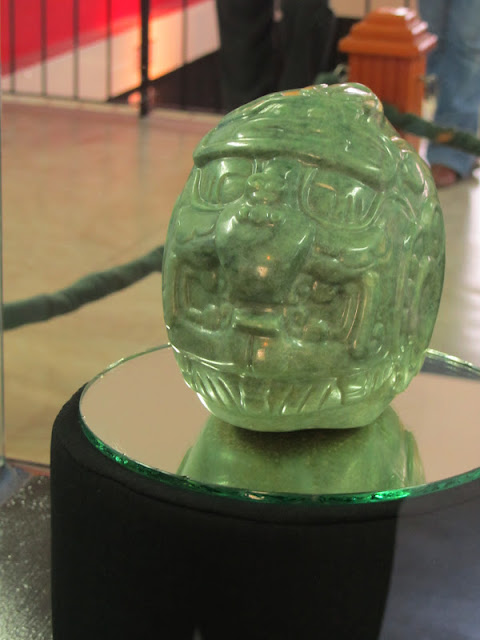 It looks like it was carved yesterday.  Highly stylized, covered in symbolic carvings and cross eyed, this Mayan guy is gorgeous.

Did you know that Mayans at that time, considered being cross eyed the height of beauty and fashion?  Often parents would hang a bead over a child’s forehead, between his eyes, at birth to cross them permanently.

Look at this profile. 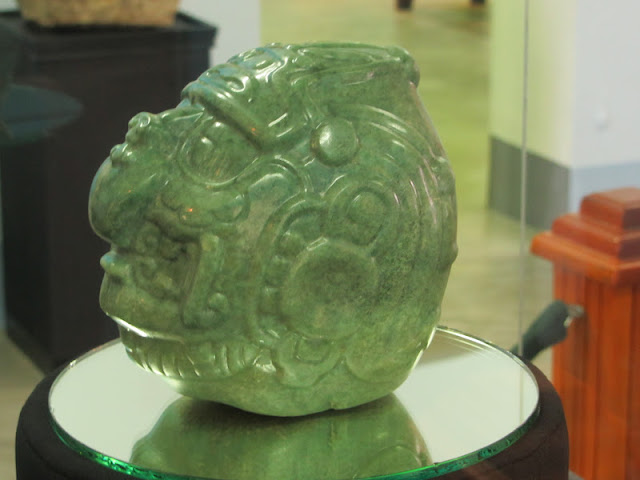 Here is my friend Tanya snapping a bunch of her own pictures.  She is also a blogger.  Her site Tizzle Sizzles is all about food, restaurants and cooking Belizean style. 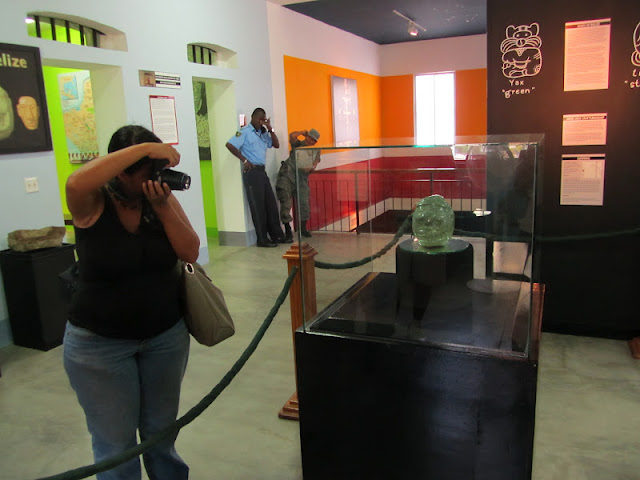 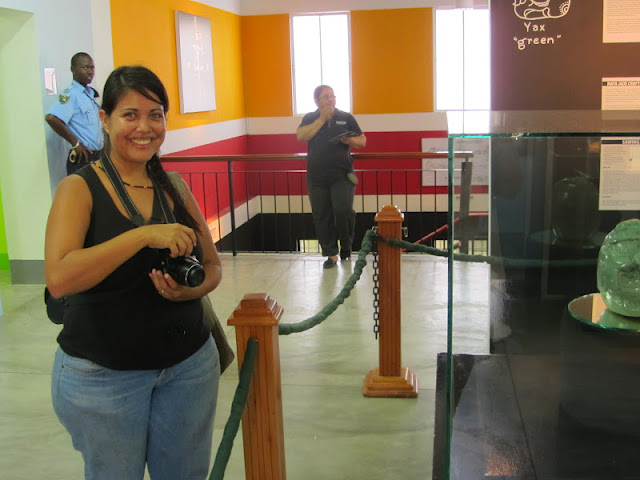 One of my favorite parts was the display showing how the jade head was found in the tomb.  The body was surrounded by tools, jewelry, art and the jade head tucked under his arm. 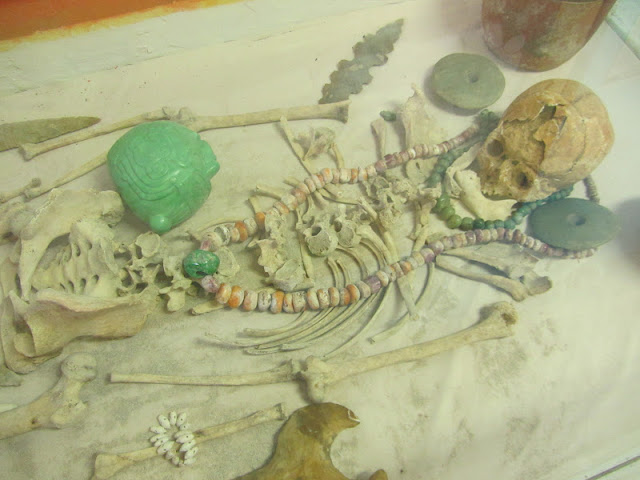 The head of Altun Ha wasn’t the only amazing artifact on display, there were masks and jewels from as early as 300 BC.  Things found all over Belize at the various sites. 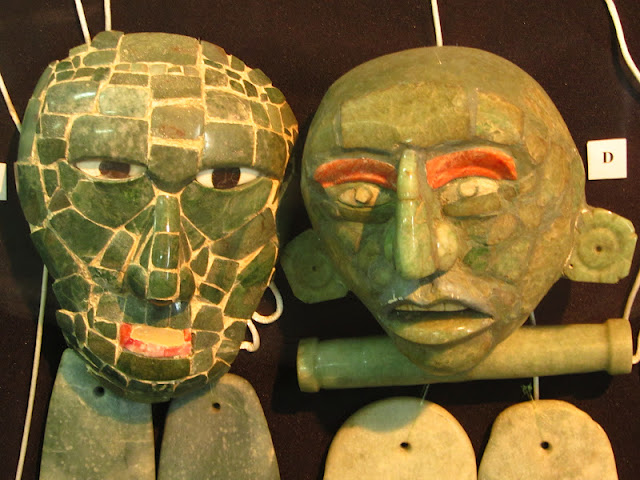 The mosaic mask on the left is from 150-300AD found at Santa Rita in Corozal.  The handsome gentleman on the right, from 900AD, was found at Cahal Pech in the Cayo District.  COOL!
Another favorite on mine, the dentistry of the Mayan elite.  They would actually embed jade stones into their teeth.  Who knew that the Mayan people paved the way for people like Lil Wayne and his gold and diamond grill? 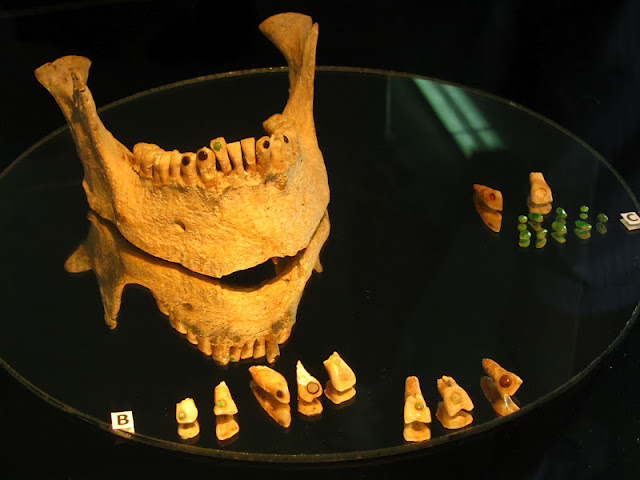 The entire second floor was open with the rest of the important Mayan artifacts.  This map shows how widely the Mayans traded…it illustrates the flow of goods around Central America.  From cacao to salt to gold to obsidian. 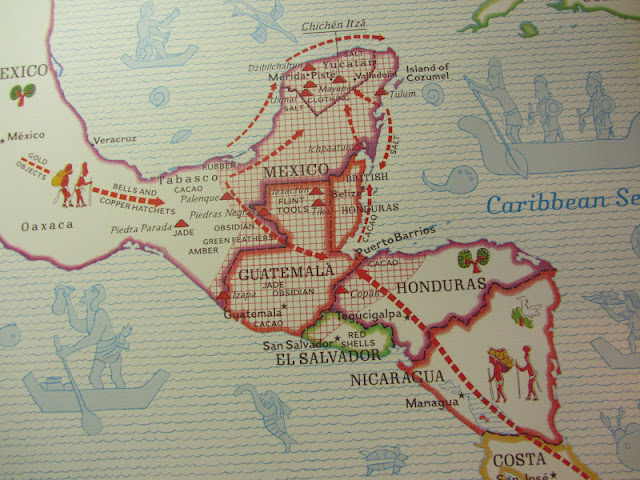 And some of the amazing pottery found in Belize. 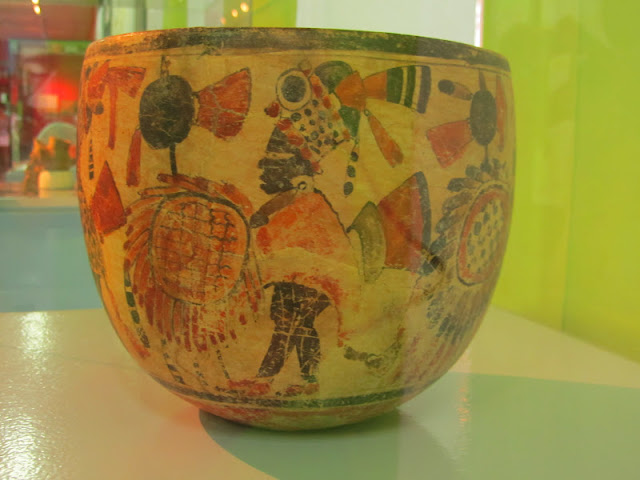 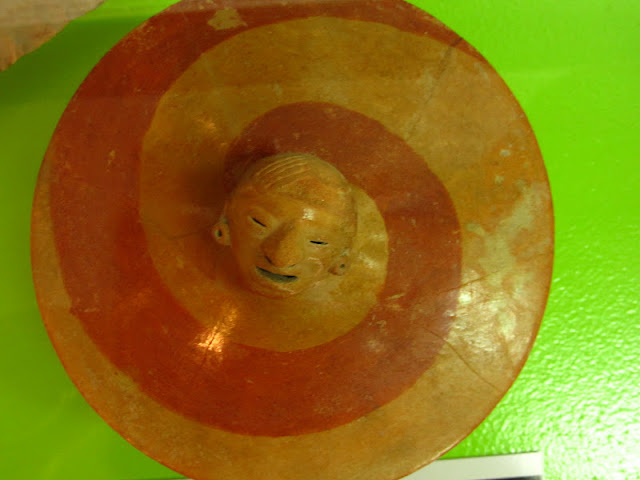 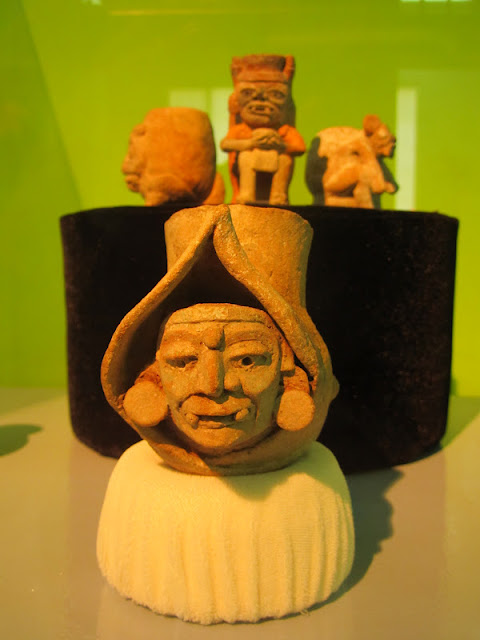 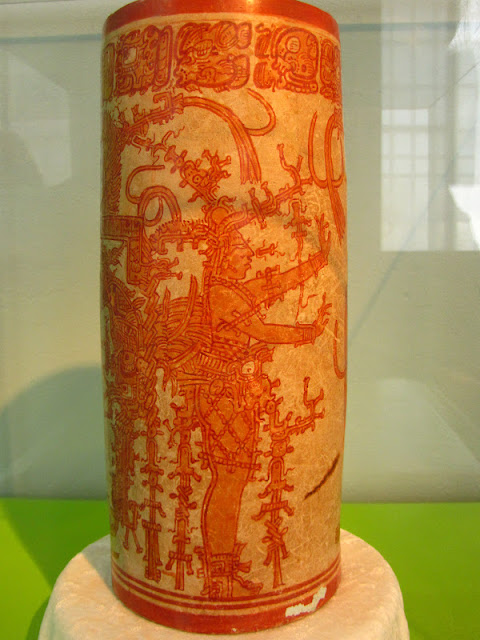 The vase above is so detailed…so beautiful.  And I liked the statuette below, a man’s head emerging from a jaguar’s mouth. 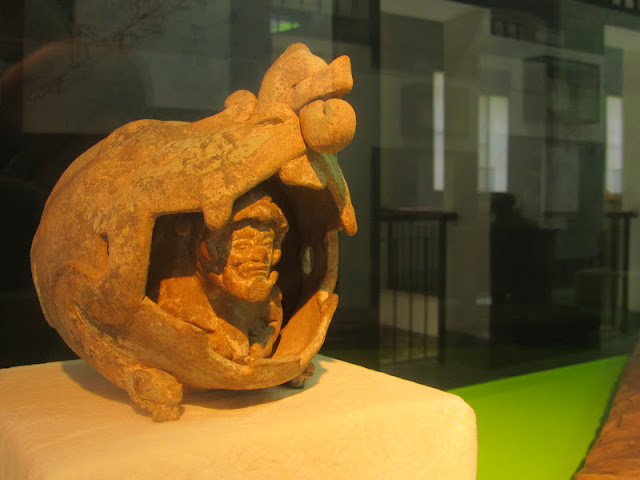 This picture showed how the Mayans collected salt from the sea.  This is probably what they were doing on Ambergris Caye. 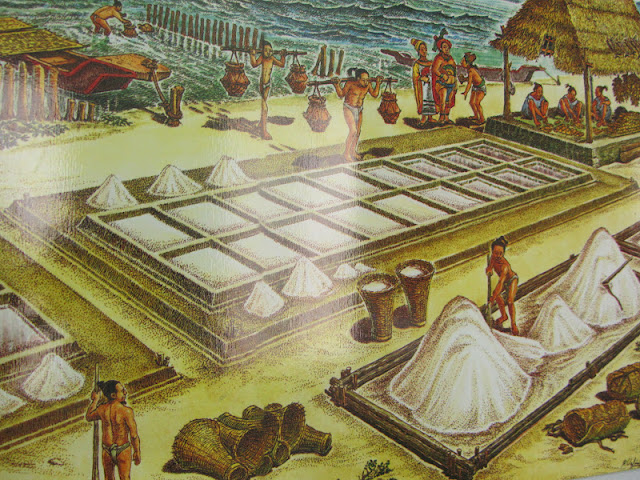 There was even a piece of a femur bone found in Cayo from the giant sloth.  On earth about 5 million years ago, this huge mammal stood over 20 feet tall.  Pretty cool. 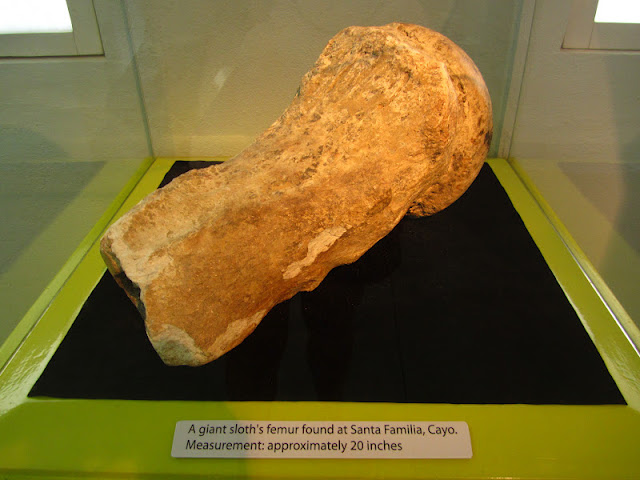 I met these two museum employees and asked when the Jade Head had last been on display.  They said that it did a tour of the country about two years ago but they can’t remember when it was last in the museum.  You get a very rare opportunity. 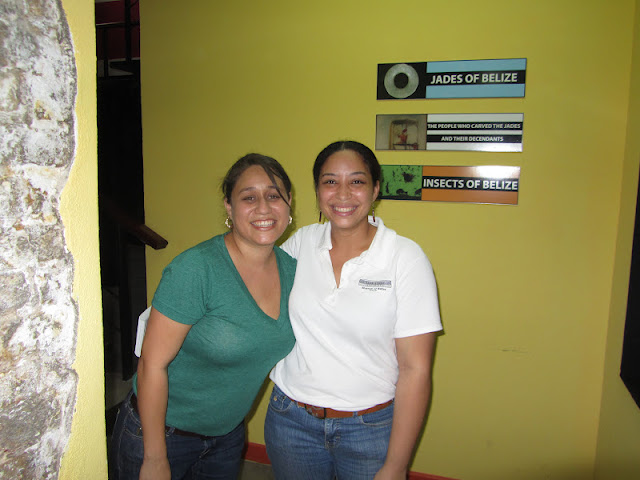 There were 4 or 5 military men outside and one guarding the actual jade stone from people who were eyeballing it greedily (me). 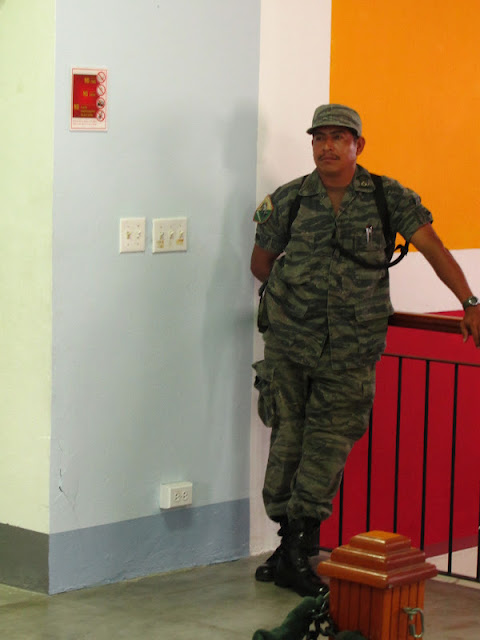 So…next time this exhibit happens make sure to attend.  I loved it.  LOVED it.  And Belize should be so proud to have such an amazing group of artifacts. 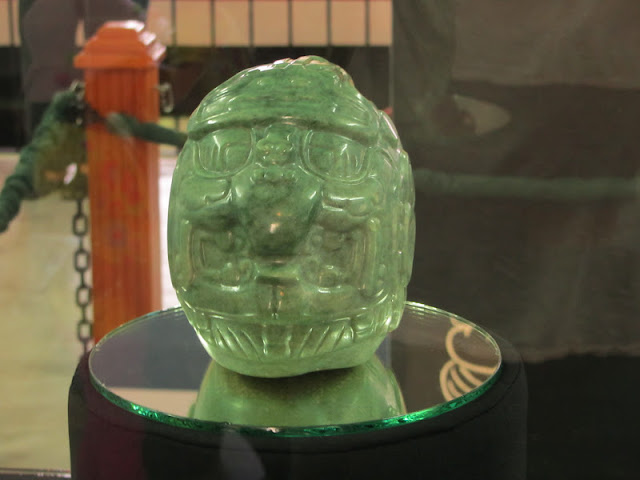 Makes me want to get out there and see more Mayan sites.  Caracol…here I come!