I woke up early this morning to thunder rumbling.  Way too early…it was still dark.  The weather was definitely changing and I was expecting there to be rain when dawn broke.  But no…the wind has shifted.  Blowing from the lagoon side, it is a cooler, cloudless blue day.  The humidity is incredibly low.  55%!  And the sea is perfectly flat. 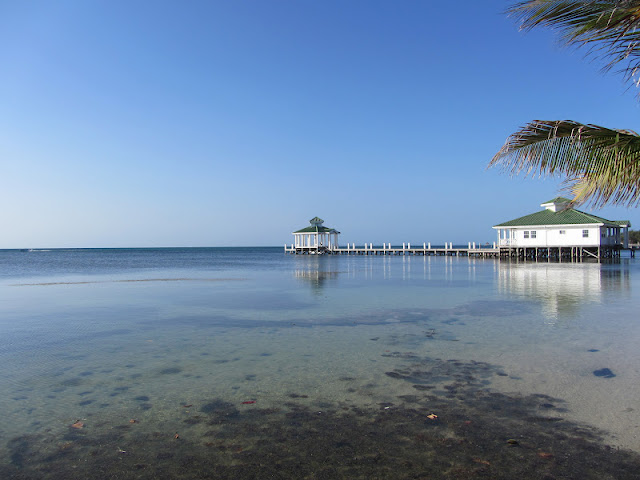 But if I have learned one thing since I’ve been in Belize, it is that this wind direction tends to bring mosquitos to the area I live.  So off to pick up some bug spray.  Though they won’t be out during the day, I like to give my ankles a little spritz when the sun is going down.

I passed our pool on my way out.  Definitely will see you later, buddy. 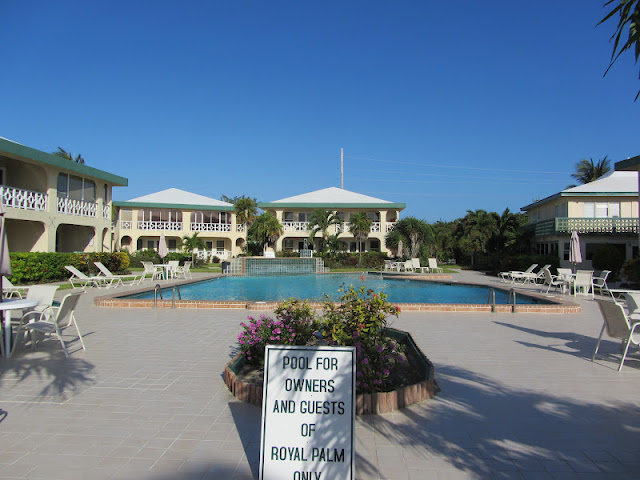 Mata Rocks Hotel pretty in white and purple.  If you haven’t checked out their beach bar, the Squirrel’s Nest, try it.  Great evening spot for a cocktail.  Happy Hour is 6-7pm each day and there is always a nice little crowd. 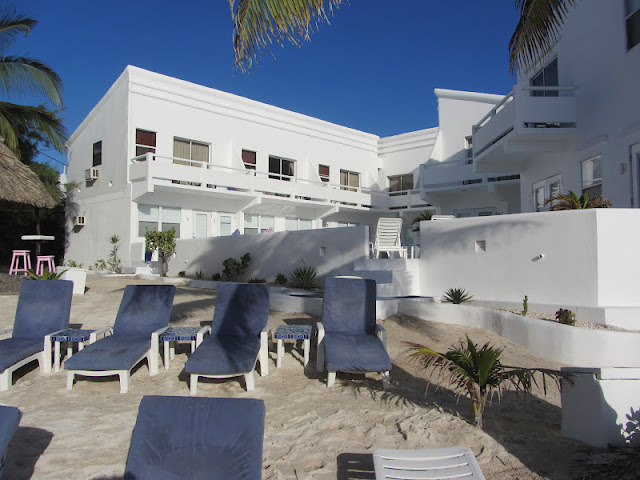 I headed over to Marina’s Store, probably the busiest supermarket on the island.  Though it can be a bit crowded…the aisles are very tight, the food turnover is high and the prices are cheap.  Marina’s sells mostly local food, the basics and lots of beers.  No matter what time of day, you’ll see some guys sitting out front drinking a few stouts.  And you’ll encounter a good sized dog pack that seems to hang out here. 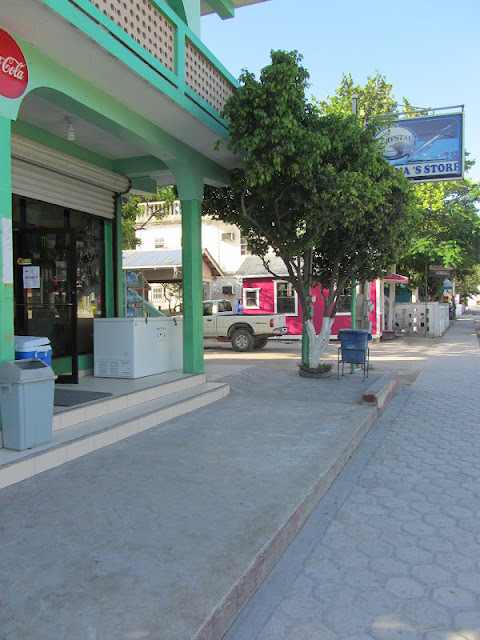 Marina’s also sells coffee and breakfast items early in the morning.  The johnny cakes are cheap and tasty.  This stuff is gone by 8am. 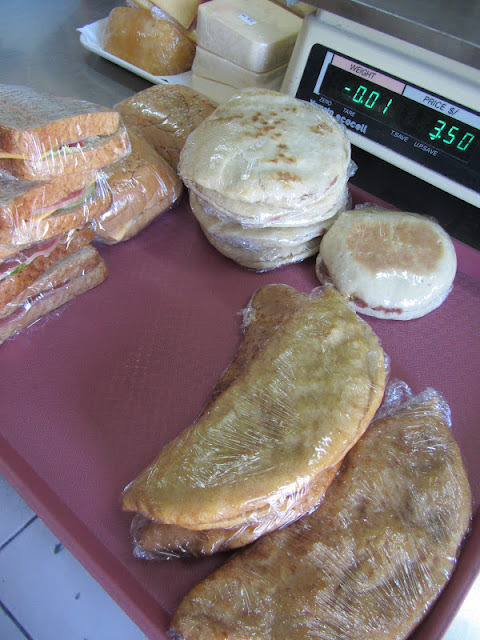 For my bug spray, I went across the street to Super Buy South.  Larger, air conditioned and more expensive, I stop by Super Buy for the things I can’t find at Marina’s.  But fruit and vegetables?  I wouldn’t get them here…the meats appear to have spent a LONG time in the deep freeze. 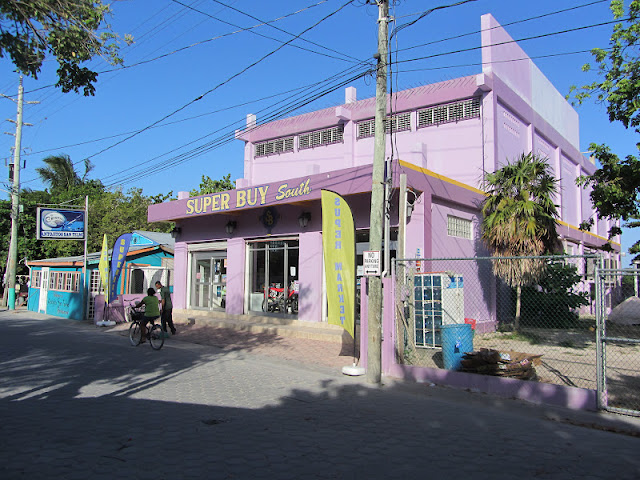 On my way home, I spotted two mysterious fruits at a veggie stand.  The teenaged boy manning the booth didn’t speak any English but I’m pretty sure he was telling me to try the big prickly green one and not the little waxy one (on the left). 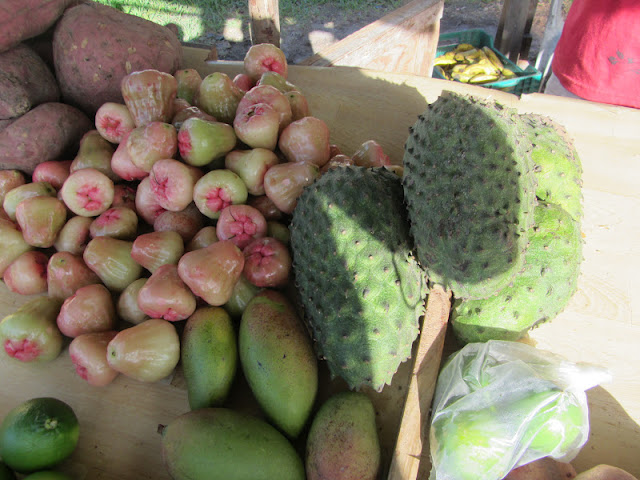 Sure…why not?  But I didn’t get the name and so far, I am scared to try it. I like to look odd edibles up first to learn important facts like “the seeds are poisonous”…

So here it is…waiting.  With some soy milk that I found at Marina’s….my favorite brand and only $5.90bzd.  I bought a few.  That’s a great deal. 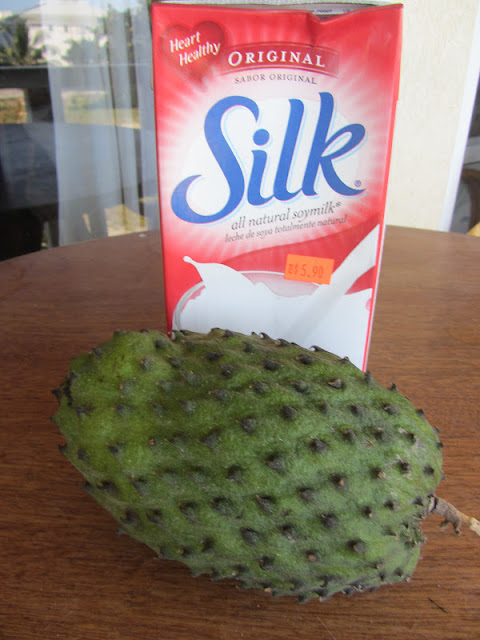 If you know what this prickly fruit is…please comment on the blog.  I’ll report back on what’s inside…

5 thoughts on “A Weather Shift, Early Morning Groceries and A New Strange Fruit”