Home » Belize Travel Blog » Honduras » Back to Roatan, An Afternoon in the West Bay and The Ferry Ride Home

We had been in Guanaja, Honduras for two days (see:  Part One and Part Two), loving it but we had hardly seen Roatan.  It was my friend Danni’s 30th birthday, it was time to head back.The 1.5 hour ride back from Guanaja is so much calmer…the seas and the winds are with you and that prevents you from getting absolutely drenched.  Less an amusement park ride, more civilized boat trip.   We stopped to buy lobsters from some fishermen/snorkellers on the way to Roatan.  $500 lempira for 5 big lobsters.  (About $25 USD) 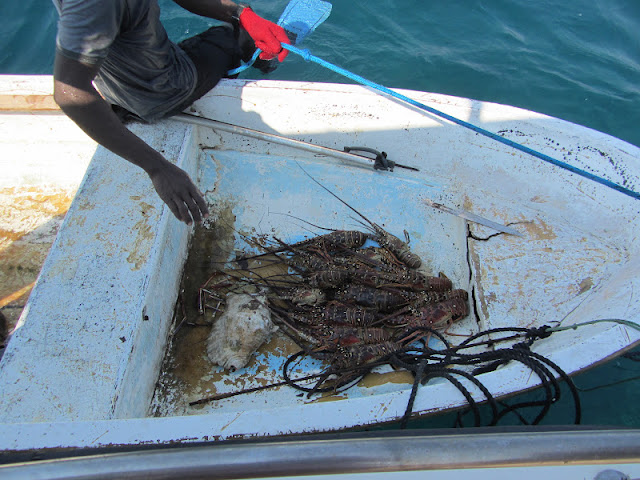 Cesar, as usual, is the chef.  Simply steamed with some garlic and butter…they were delicious.  Gets me excited for the upcoming Lobster season in Belize.  Don’t forget, the San Pedro Lobster Festival to kick it all off is June 15th to June 23rd.  It’s your chance to party like a lobstar… 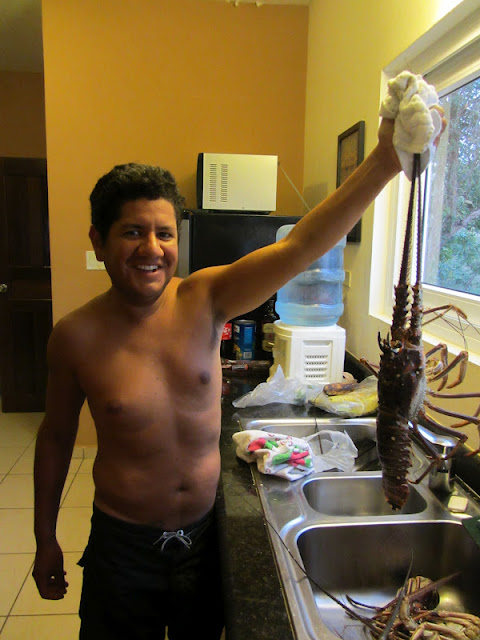 Danni dressed for her big birthday dinner.  We meant to go out afterwards…really we did… 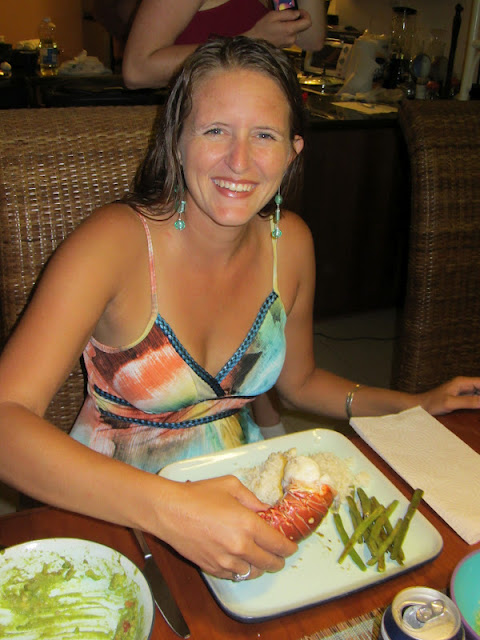 But ended up going to sleep early.  Next day, we headed down the road for lunch in the West End.  There is quite a big of digging and construction going on.  The town is digging a new sewer line under the sand road and installing a public bathroom at the town entrance. 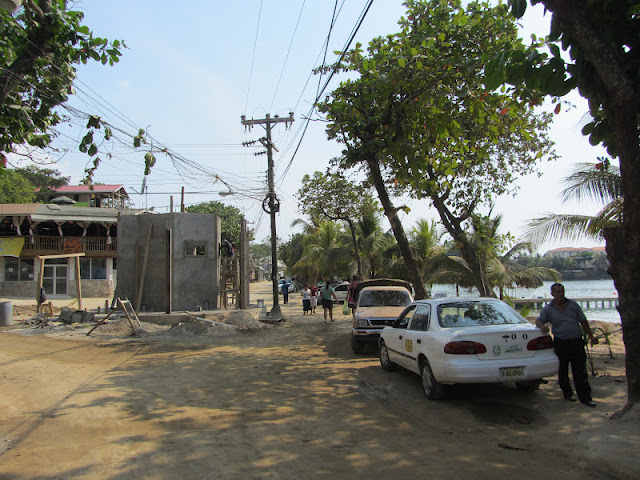 They are also planning to pave the road…many in town don’t seem to like the idea.  The same battle occurred on Ambergris Caye when the roads were paved 5 years ago.

At lunch, we ran into Chrissy (she is on the left).  Her parents are my neighbors in San Pedro and she has been living and working in Roatan for the past 6 months.  She LOVES it. 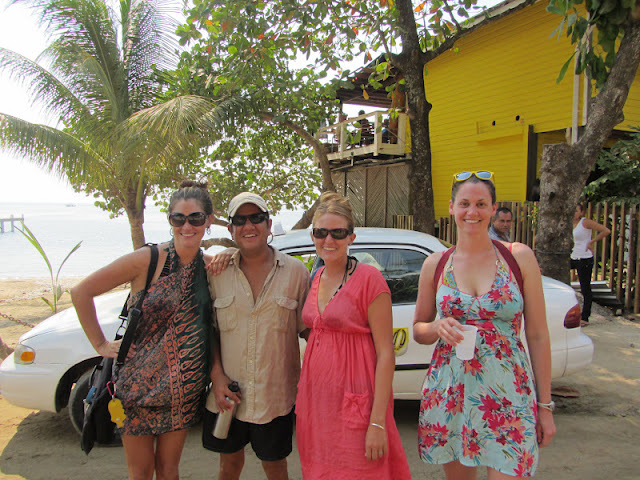 She suggested we take the water taxi over to the West Bay to hang out at the beach and hopefully avoid some of the sand flies.

The taxi is in the middle of town and leaves often…whenever there are enough passengers to go.  4 of us was enough.  For $50 lempira each (about $2.50 USD), we headed around the bend. 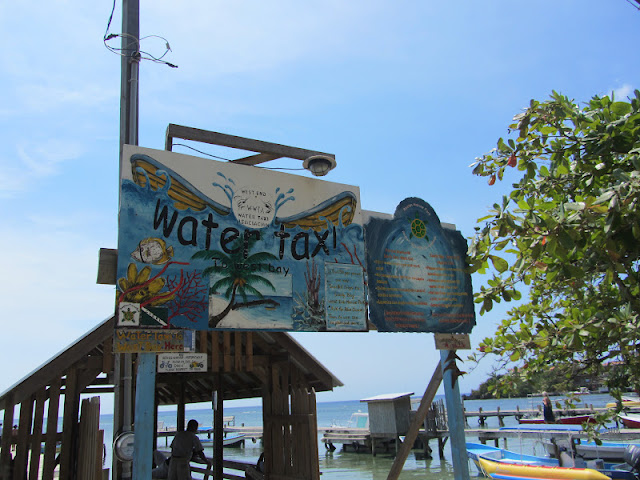 The West Bay is a long sandy “classic Caribbean” beach loaded with resorts, bars and lots and lots of chairs.  Luckily it wasn’t a cruise ship day so the beach wasn’t very crowded…mostly locals hanging out and playing volleyball. 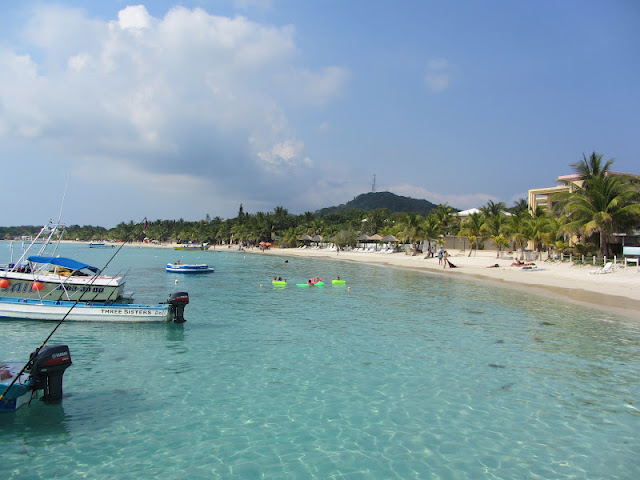 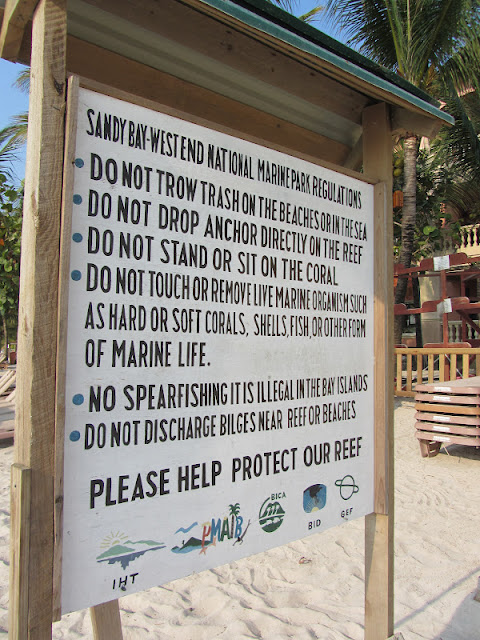 The sand and water are seriously pretty… 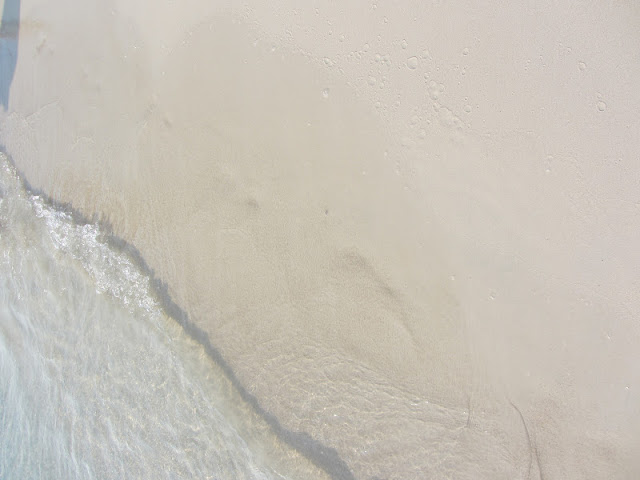 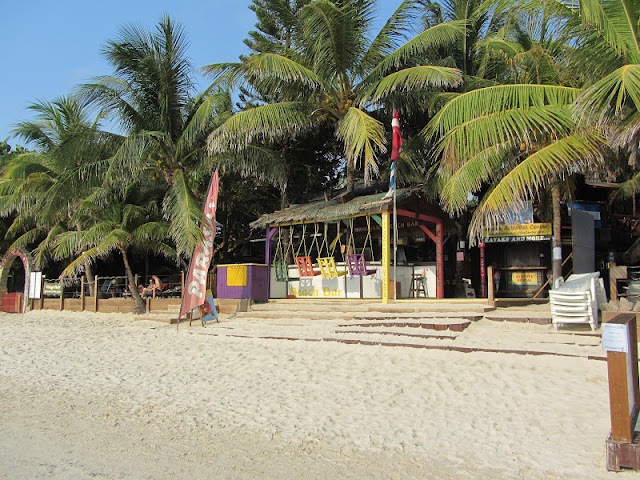 When the cruise ships come in, these places are generally packed. 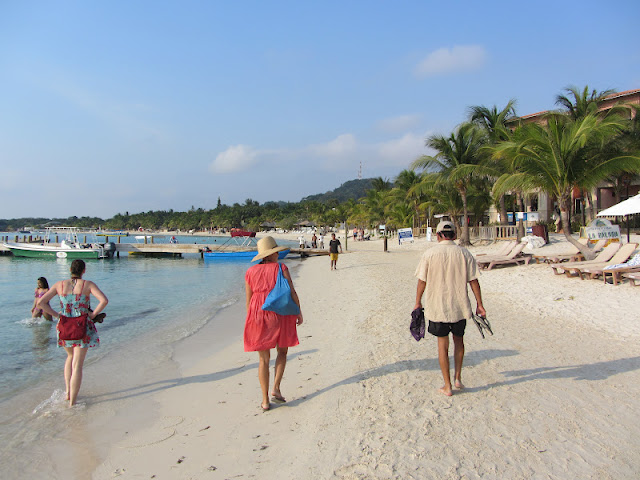 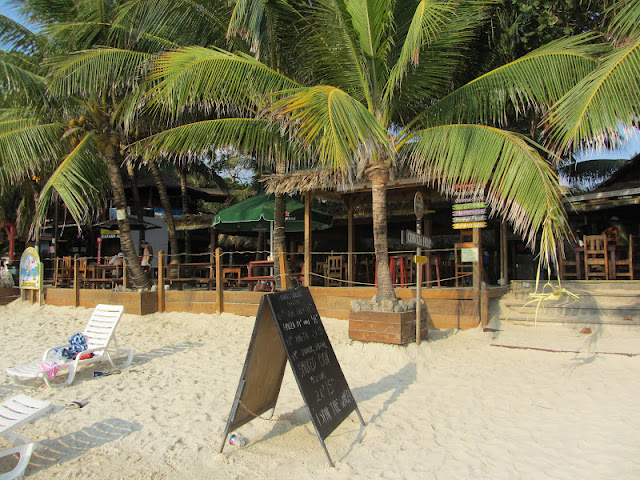 Good sign.  The perfect answer to “what are your hours?” 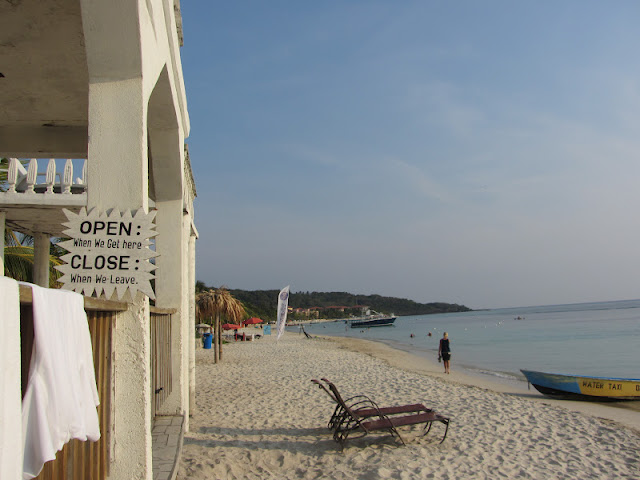 We took the 10 minute ride back to the West End and back home.  The first Galaxy Wave ferry leaves for La Ceiba at 7am.  I was a bit nervous about the trip.  The way over was a bit…well…nauseating.  The automatic handing out of sick bags does not give one a comfortable feeling.

But like the ride from Guanaja, the seas on the way back were much better.  Also, key to the process is sitting on the top level with lots of breeze.  I felt perfectly fine.  (The dramamine probably didn’t hurt.)

A cruise ship was in port.  Good bye Roatan!  I’ll be back… 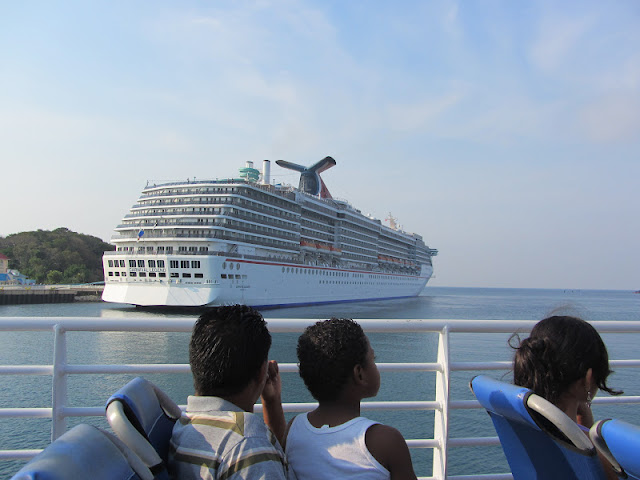 Particularly when www.tropicair.com starts their direct flight to the island.

I am almost finished telling you about my trip to Honduras and thinking about my next adventure.  Thinking Antigua Guatemala and Lake Atitlan.  With the slower season coming up and prices going down, this might be the right time to see EVERYTHING!  What do you think?

2 thoughts on “Back to Roatan, An Afternoon in the West Bay and The Ferry Ride Home”