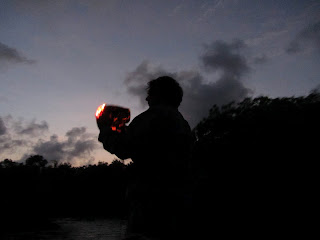 Most people that visit San Pedro swim with sharks and sting rays at Hol Chan Marine Park.  Some go to see manatees, some see monkeys on a trip to the mainland.  But there is a relatively new tour that exposes people to a threatened species that lives right here on the island.  You hardly have to travel far at all to get a look at the potentially 15-20 foot long American Crocodile in his native habitat.
Vince and Cherie, the founders of the American Crocodile Education Sanctuary have spent years saving, rehabilitating and, when necessary, relocating these large predators all over Belize.  They are now stationed on this island and have started a really cool tour to allow people to see and, if you are ready, touch these slightly scary animals.   (How cute are they?  Only a matter of time before they have a TV show I think). 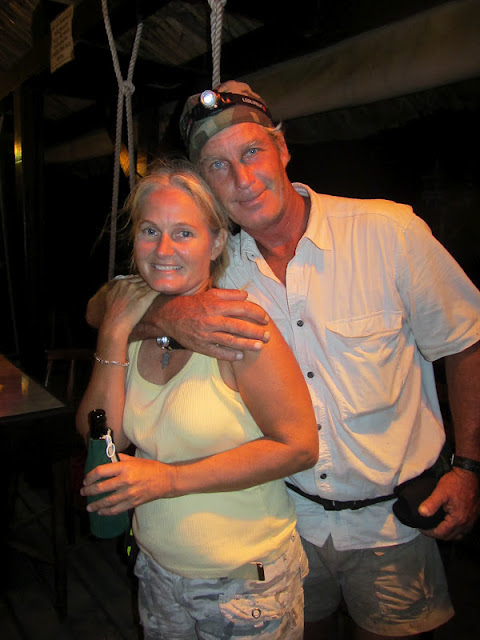 As the island becomes more and more developed, the crocodiles lose their habitat, the brackish water of the mangrove trees, and are forced closer and closer to humans.  Crocodiles used to people and used to be fed by people is a bad thing.
For the tour, everyone meets at the bar at Reef Village just north of the bridge.  You can arrive early and have a few drinks and food, you can bring some drinks on the boat…Vince and Cherie are totally flexible.
Just as the sun sets, our group loaded onto the boat.  Here is the first thing you see.  Yikes.  The skull of an eleven footer. 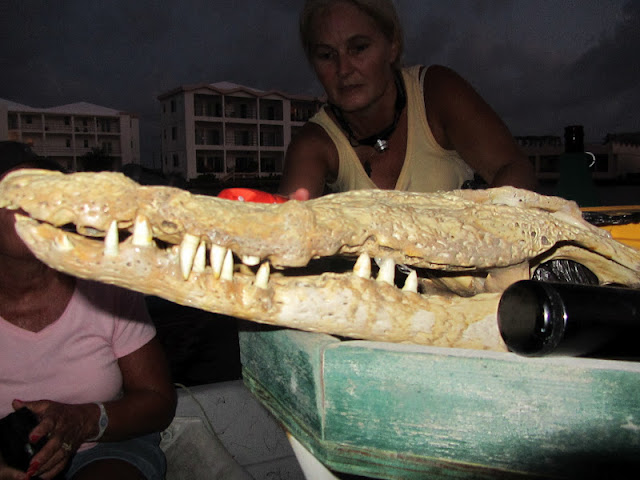 Cherie gave us the run down on what ACES does, what the tour would be about and answered as many questions that we had.  She told us about crocs they have rescued and estimates that up to 90% have been injured in some way…with bullet holes, knife stabs, one was blinded.   Poor guys. 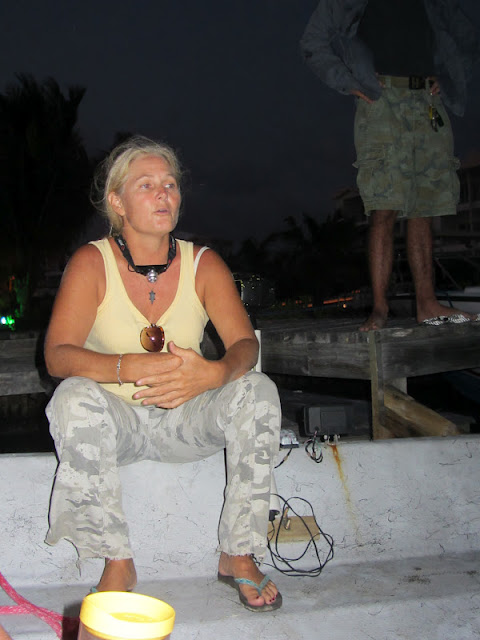 Let’s find some crocs!  Since it is night time, Chris shines the flash light at the edge of the mangroves and docks to find the orange glow of croc eyes. 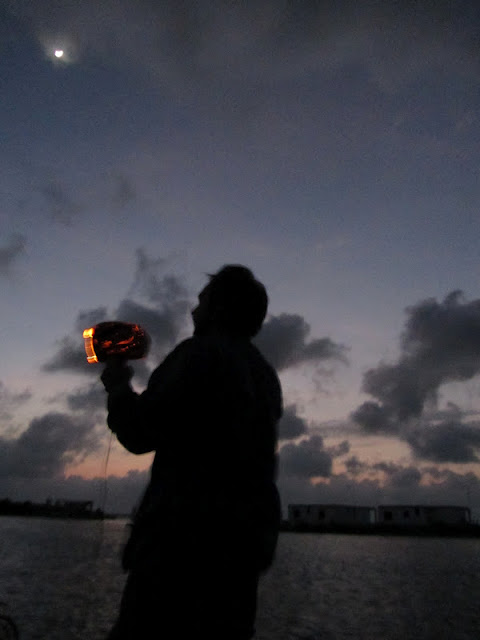 We spotted one as we pulled away from Reef Village and then another one when we got a bit farther out.  Chris and Vince jumped in to get it!  You couldn’t pay me to get in this water at night after I had just spotted a crocodile. 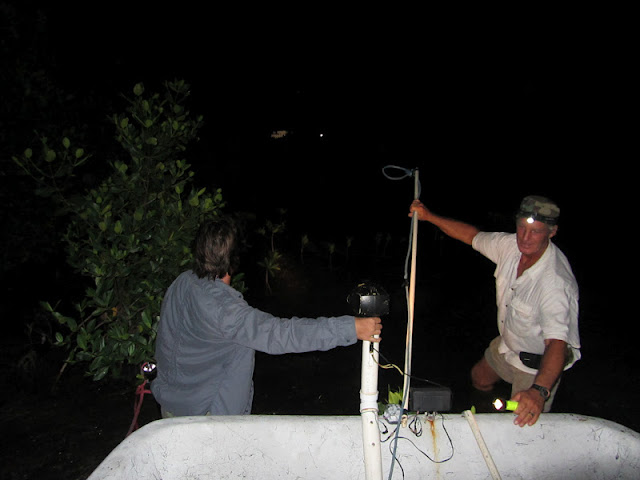 Calf deep in muck, he waded into the mangroves but this croc wasn’t in the mood to be caught that night.
We continued to look along the lagoon side of Boca Del Rio.  If you need to use a bathroom or just stop and grab a beer or soda, there are a few bars that you can swing by.  We kept going…we had a crocodile on board that we were letting go.  This little guy had been found in San Mateo just a few weeks before under someone’s house.
He looks little but when measured, he is almost four feet long. 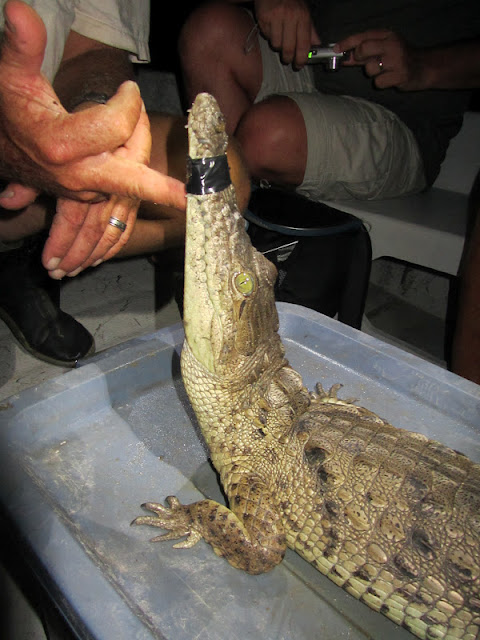 He also looks docile but when he first came out of the container, he gave a brief thrash that let’s you know that this guy means business. 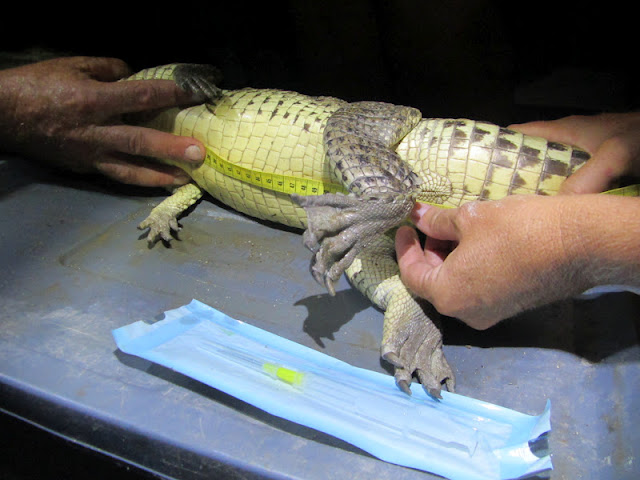 After measuring him, sexing him (see that little pucker down by his back legs?  His little bits are in there), observing the hole in his tail where he had been jabbed by someone, implanting a micro-chip in him and naming him Crocodile Chuck Dundee, we all were given the option to hold him.   See those claws and teeth?  I’m too big of a wimp…but some in the group were more brave.
Cheryl, the one holding him, actually developed quite a bond. 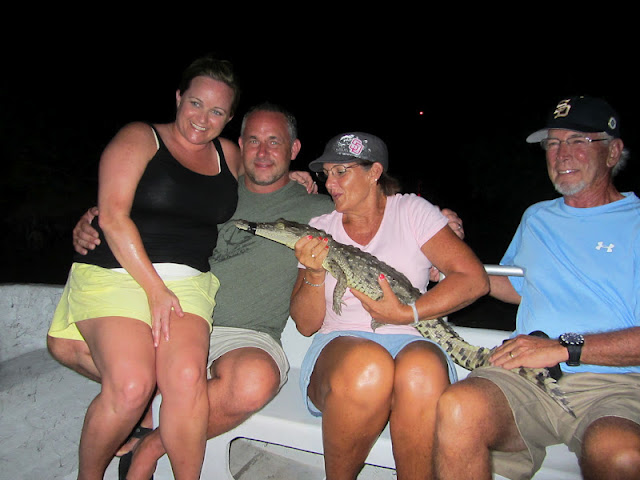 She volunteered to let the little guy go in the water.  It was a very cool thing watching him swish his tail side to side and sail under the mangroves to eat what he is supposed to be eating…fish, shrimp and crabs.  Not trash from under a house.
ACES takes people out on the CSI tour (Crocodile Scientific Investigators) every Thursday, Friday and Saturday evening by reservation only from the Tiki Bar at Reef Village.  The price is $40 USD per person (4 person minimum) and all of the funds allow these guys to do more good work saving these endangered species.  Keeping both humans and the crocs safe and healthy (well…healthy just applies to the reptiles, the humans are on their own).
Definitely a good cause but also a very fun trip.  It’s beautiful being out on the water at night, seeing the crocodiles as well as large herons and tons of jumping fish.  According to Vince, it is a different tour each time.  Some trips they see and capture big crocodiles either in the wild or ones that have been caught in the traps that have been set in heavily populated areas.  Kids would totally love this stuff.  I loved this trip.

For more information on the tour or Vince and Cherie’s program, check out there website:  Americancrocodilesanctuary.org.

AND, it is illegal to feed crocodiles in Belize.  Once a crocodile associates humans with food and loses its natural fear of people, it can become a dangerous and potentially sick animal.  This trip is the right way to view these huge predators on Ambergris Caye.