Relatively recently, Tropic Air (the domestic airline in Belize) added a new route to their international roster.  You can now fly directly from Belize City to San Pedro Sula, Honduras.  Honduras?  So close and yet I´ve only visited once.  This flight I need to try out.  The current fare is $107.50 USD each way when booking a round trip ticket.  And look at this view from the plane! 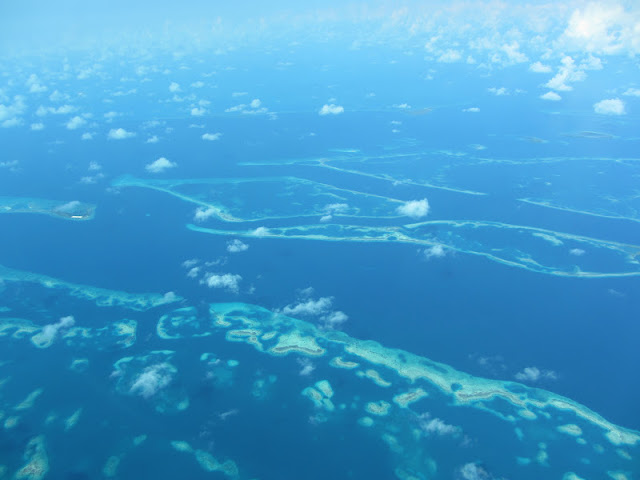 San Pedro Sula is a huge city in Honduras…about 800,000 people (or 2.5x the size of Belize).  It is considered the economic capital of the country.  The international airport in SPS is serviced by flights to and from the US on airlines like Continental, American, Delta and TACA.   The city is also a great kick off spot for flights around Honduras.  Aerolino Sosa, CM Airlines and TACA Regional all fly from San Pedro Sula to places like Roatan, Copan (one of the great Mayan sites) and Utila (a hugely popular diving destination).   Honduras, as I am finding out, also has an extensive bus system…from first class buses like Hedman Alas to old, old, OLD chicken buses.

I had to take the 7am flight from San Pedro, Belize to the Belize International Airport.  For my own sanity, I will gloss over the part where I got to the airstrip at 6:52am, didn’t have my wallet with me and had to race back home.  I am still attempting to regulate my blood pressure after that little incident.

It was a beautiful day.  We flew right over Caye Chapel, which I hear is reopen for golf by appointment. 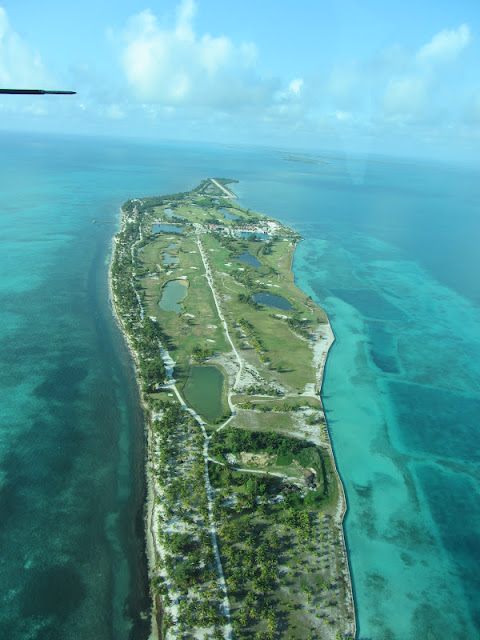 I arrived at International Airport 20 minutes later, did a quick check in and went through immigration and security. 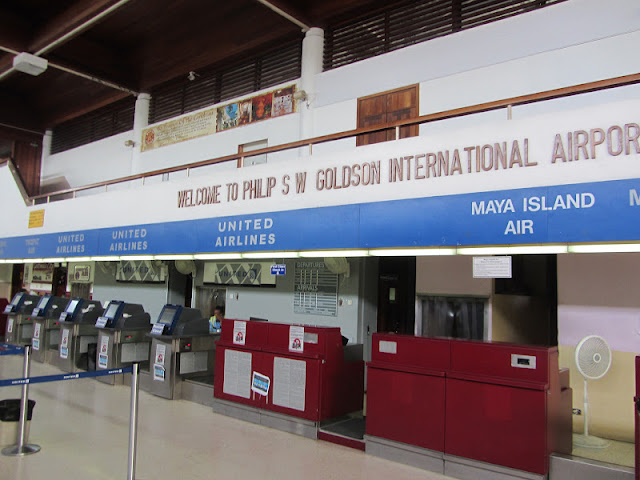 An easy process.  You DO NOT have to pay the exit fee from Belize to Honduras since the cost is already included in your ticket.  That was very good news. 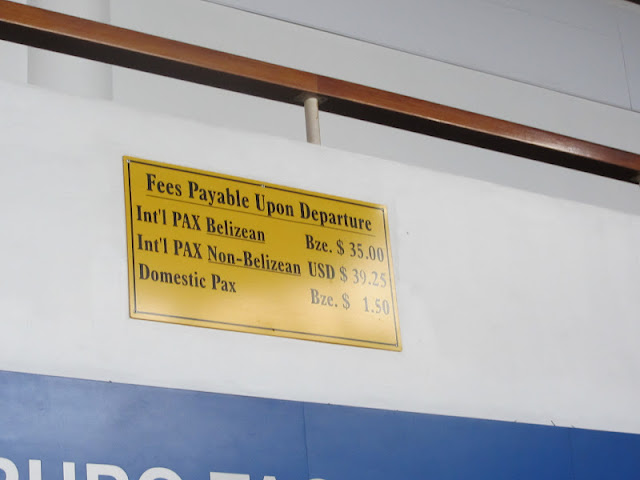 I stopped in to say hi to the famous Jet of Jet´s Aiport Bar.  Did you know that AOL Travel named Jet´s one of the 10 best airport bars in the world?  THE WORLD.  Yup…it´s true.  Here is the list.  You need to stop in, meet this guy, listen to his stories and have a Belikin.  He is quite a character. 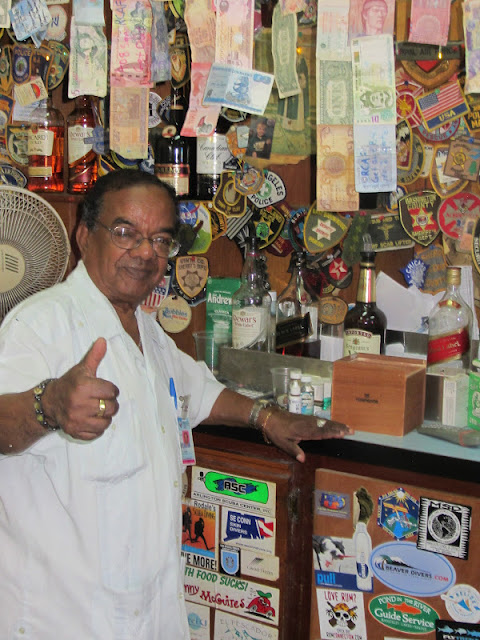 But too early for a beer…I had a johnny cake and waited for the 8:30am flight. (The the jalapeno johnny with ham and cheese at La Petit Bakery…it is really good.)

There were 5 people in total boarding.  One was a tourist who had been visiting Caye Caulker.  He was going to Utila in the Bay Islands to get certified in diving.  It is supposed to be one of the cheapest places in the world to do it.  There were 2 businessmen returning to Honduras and one Belizean going to do business.  We boarded our flight. 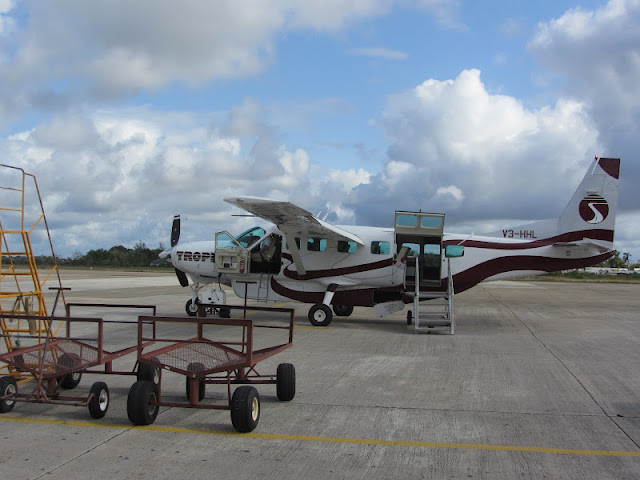 Up, up and away.  The plane plotted a course directly south along the reef to San Pedro Sula.  Nosy as ever, I parked myself in the front seat and peered over the pilot´s shoulder the whole time.  (It makes me feel like I am flying the plane myself plus, I like watching the map). 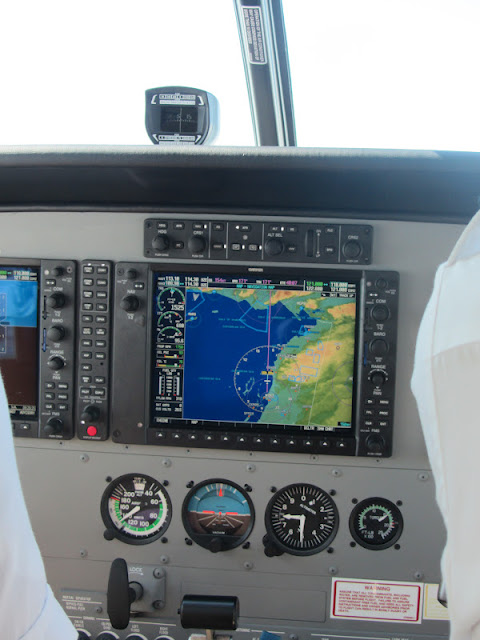 The view was stunning…we spent very little time over land.  This is just south of Belize City.  When in the air, you remember how sparsely populated Belize is. 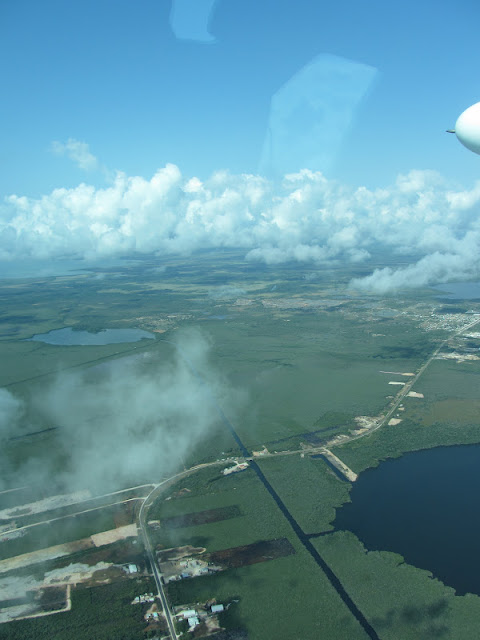 We moved over the Caribbean quickly and the view was incredible.  Reef on the left and the tiny islands dotting the left hand side.  Most are unpopulated…barely above sea level.  Gorgeous. 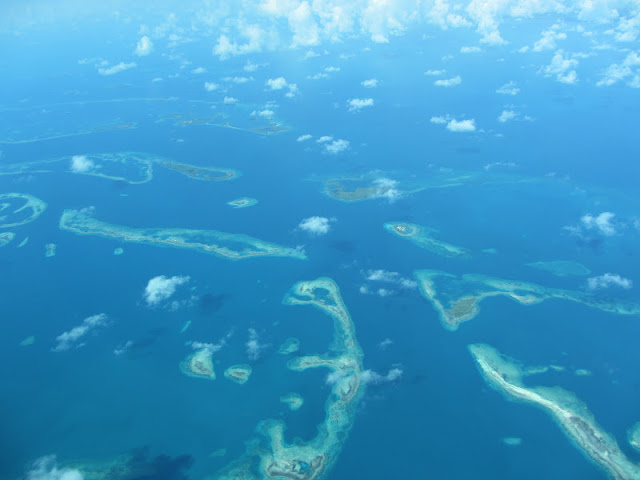 We landed in San Pedro Sula about 45 minutes later.  Easy.  Outside looked quite similar to Belize City airport. 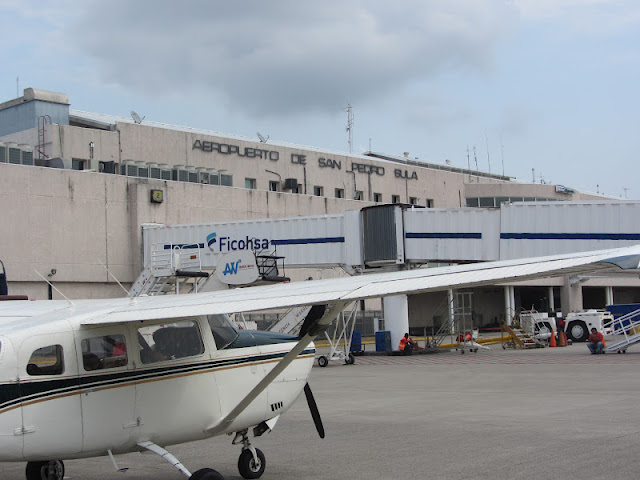 But after customs and immigration (which took about 10 minutes), I entered the main terminal.  A totally different world.  Dunkin Donuts?  Wendy´s?  Rebecca, you are not in Belize anymore. 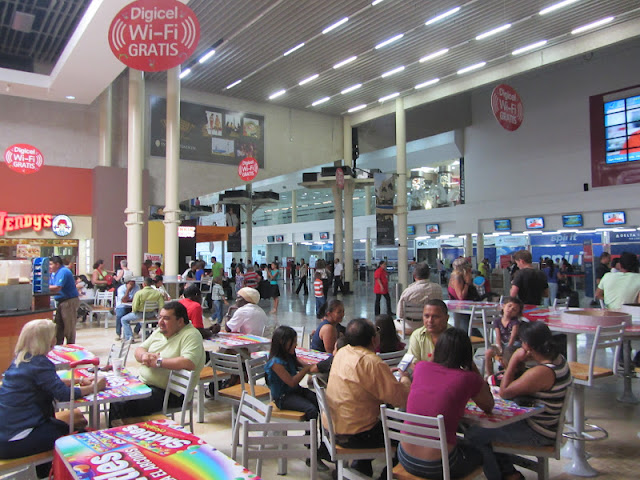 I went to the ATM machine to take out some lempiras (about 19 per USD).  I was certainly not going anywhere without money.  I went to find a taxi to the bus station in town.  I was meeting my friends in Puerto Cortes (a large city about 45 miles away on the coast) and a bus was going to take me there. 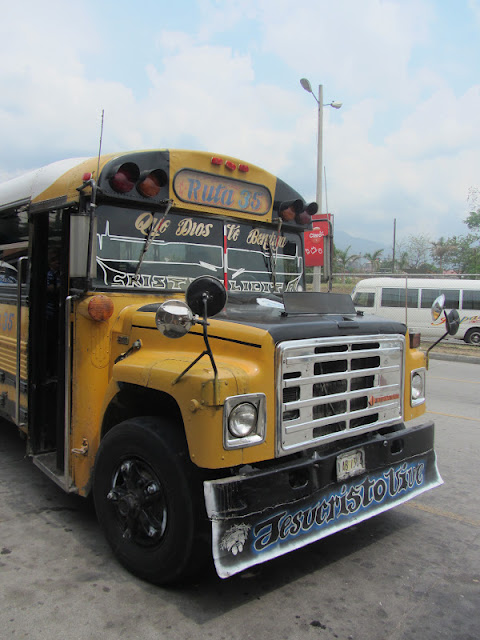 Why are all buses in Honduras devoted to Christ or marijuana?  Intriguing…

The taxi from the airport to town (about 10 miles) cost me $15 USD.  On our way, my taxi driver stopped at a roadside stand to buy a watermelon…probably a 10 pounder.  40 lempiras (or about $2 USD).  CHEAP!  I think I am going to like this country.

I´m off on an adventure.  I met up with my friends Dani and Cesar (who I just recently traveled thru the Yucatan with) and we are headed down the Caribbean coast of Honduras for a bit.  Stayed tuned…but so far, I am totally digging this country.  And enjoying how easy the trip was with Tropic Air.

1 thought on “Flying from San Pedro, Belize to San Pedro Sula, Honduras on Tropic Air: What a View!”