So where did I stop with my last post…I had taken a taxi from the airport in San Pedro Sula, Honduras to the bus terminal and I was ready to meet friends at the beach, in Puerto Cortes.   The bus station is enormous and there are probably hundreds of buses and collectivos (the smaller ACed vans) going in every direction. 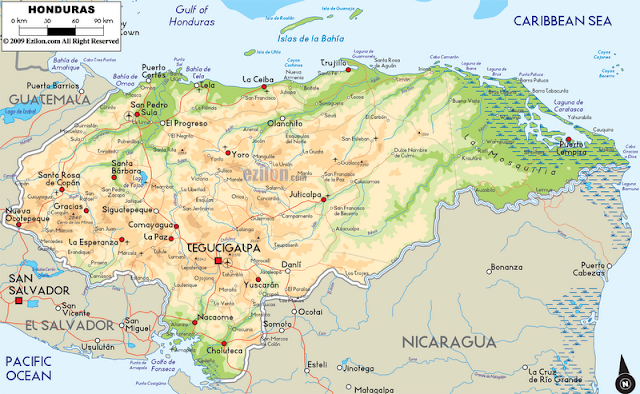 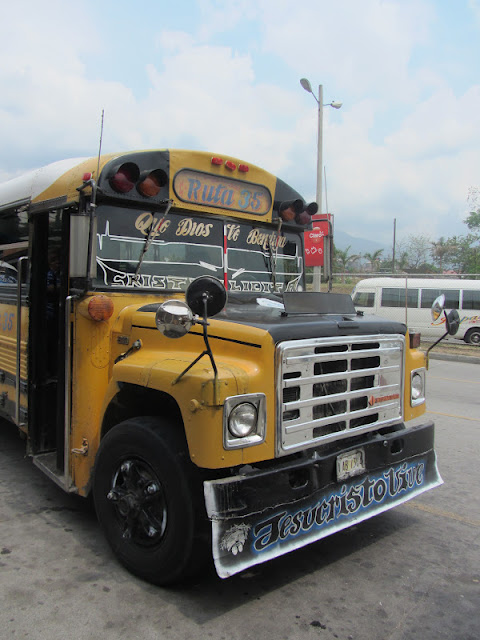 I told my taxi driver that I was going to Puerto Cortes and he dropped me off at the right van.  Easy.  I boarded, we waited until it was filled and took off for our destination.  I guess I chose the local bus.  Rather than the one hour the internet had promised, we stopped OFTEN and it took almost two hours.  Oh well.  You pay your fare to the conductor on the van…only $55 lempira.  Or just under $3usd.

Puerto Cortes is not the Riviera of Honduras as Puertocortes.hn touts.  It is a HUGE industrial port.  Massive ships were being unloaded and the small city looked…well…a bit depressing. 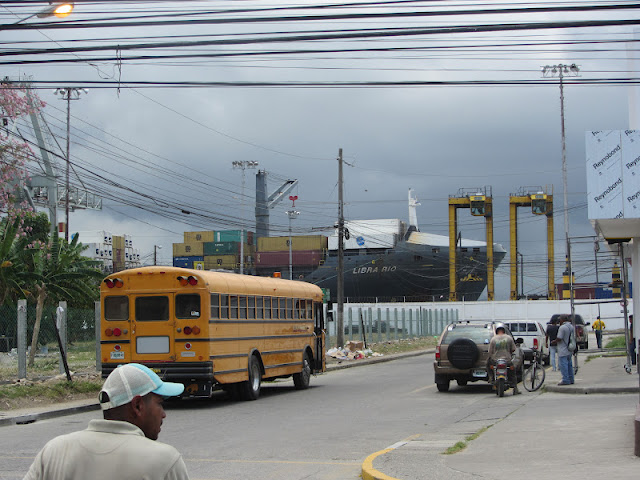 I wandered around for a bit (almost 2 hours early to meet my friends) searching for a bar…a place to sit down and have a beer.  But I couldn’t find anything.  Blocks and blocks and no bar.  What kind of town is this?  What sort of self respecting port town doesn’t have a good drinking hole for thirsty longshoreman?  Not even a strip club?  Maybe one called the “Navel Base”?  Disappointing.  Shameful really.

I ended up at the local super store eating a meal that I wouldn’t call culturally significant. 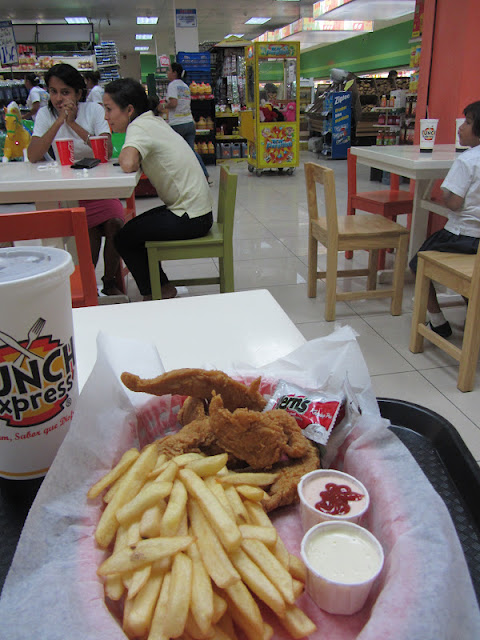 Dani and Cesar picked me up in their super vehicle and it was off to Omoa.  Omoa is a small beach town distinctive for its old Spanish fort dating back to the 1750s, its Garifuna population and the hordes of people that arrive from the inland San Pedro Sula each weekend.  It is situated on a very pretty bay of crystal clear water surrounded by perputually haze covered mountains.  Here is the bay during the week… 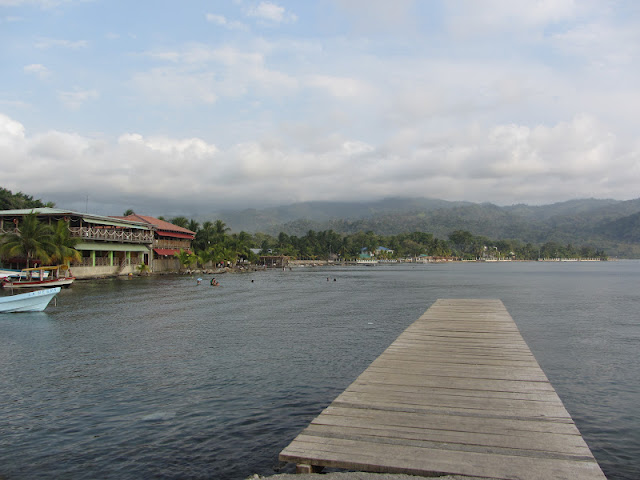 And this is the bay on May 1st, a public holiday Labor Day in Honduras. 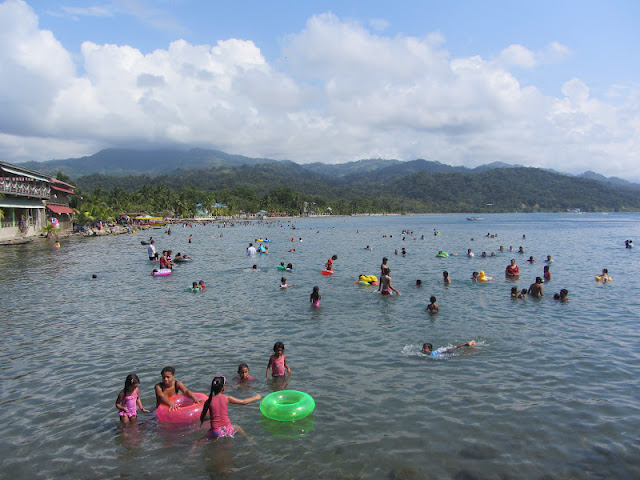 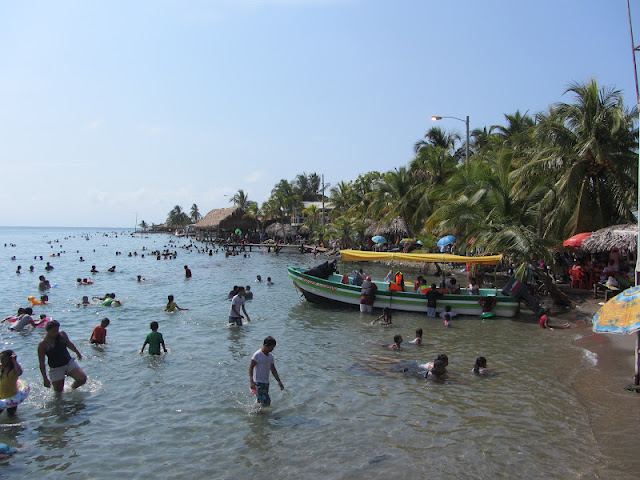 At first, you wouldn’t know the water is so clear…the sand is fine and chocolate brown…okay…let’s admit it.  The sand is the color of dirt.  But it is good swimming.

Here is the taxi of choice in Omoa.  Tuk Tuks. 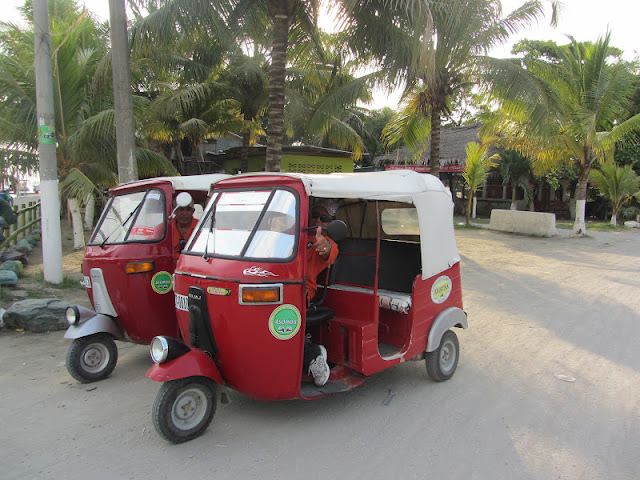 My friends had set up shop at Roli’s…a hostel, campground, small hotel and gorgeous garden about 200 feet from the ocean.  Roli is a Swiss gentleman with a pretty big chunk of land. 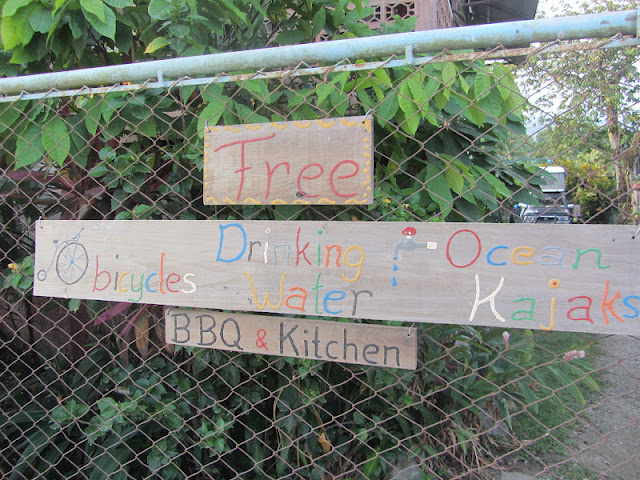 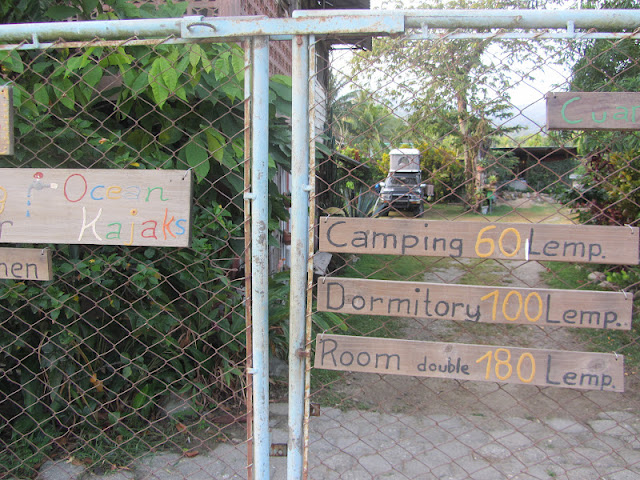 I pitched my tent under a big fruit tree.  (Did I ever tell you that my heart’s fondest wish is to own an avocado and a mango tree?) 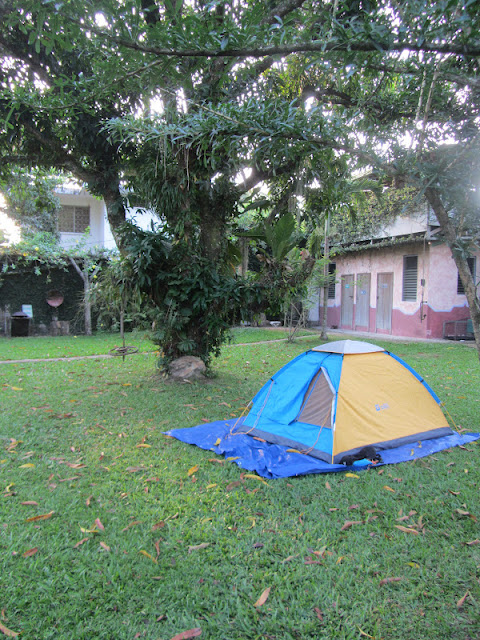 For those of you who like orchids like I do…look at all of these flowers hanging from the trees and bushes around the garden. 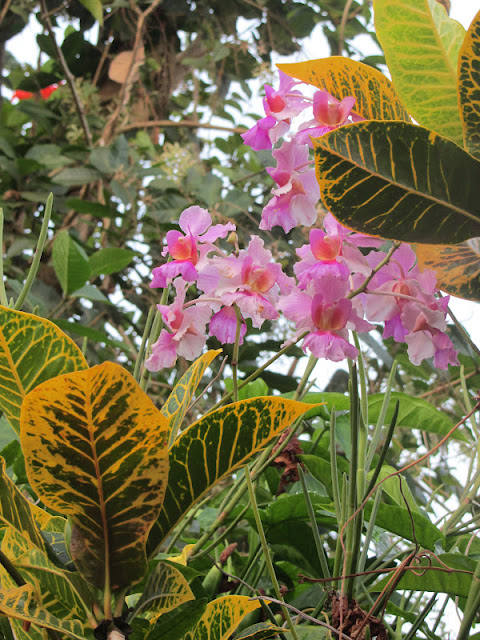 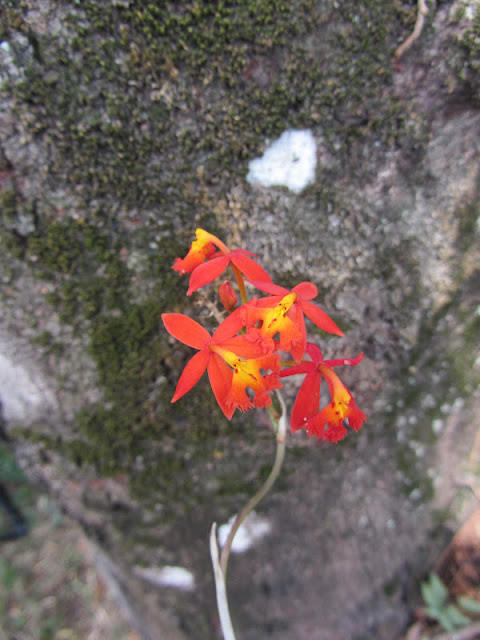 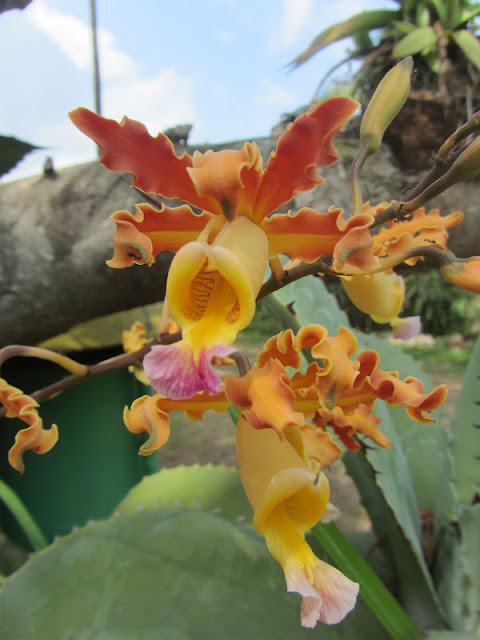 If you prefer staying right on the ocean, the nicest looking hotel is Sueno Del Mar.  Owned by a Canadian couple, it has a huge airy lobby, a beachfront deck and sitting area and nice garden in the back. 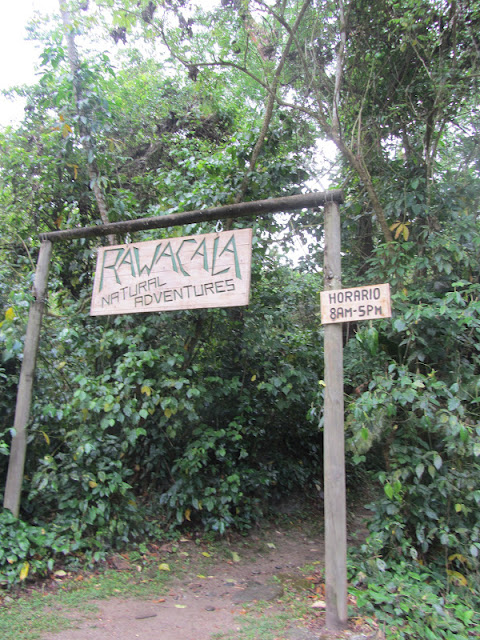 We woke up the next day to find a waterfall.  We headed to one that had been described by another set of Canucks who own Henry’s Bar in Omoa.  (Why does every town…no matter how small or remote it is have a Canadian bar?)   About 5 or 6 miles out of town, Rawacala is a hiking area, zip line ($25USD fee), picnic area and waterfall. 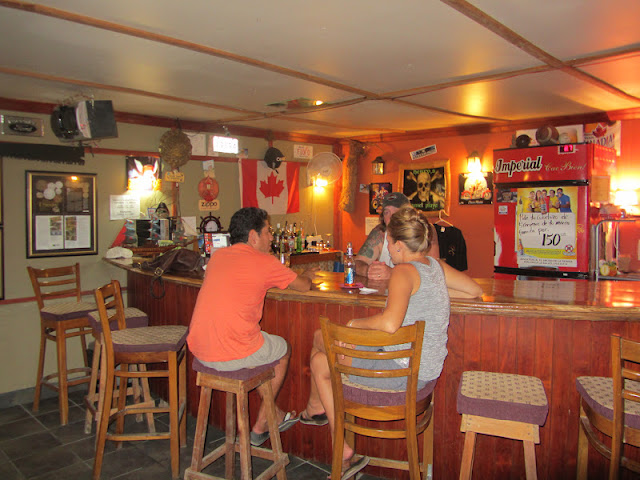 There is a slightly tricky stream to cross on the way to Rawacala.  There were plenty of cars there so it seemed like no problem for Hondurans. 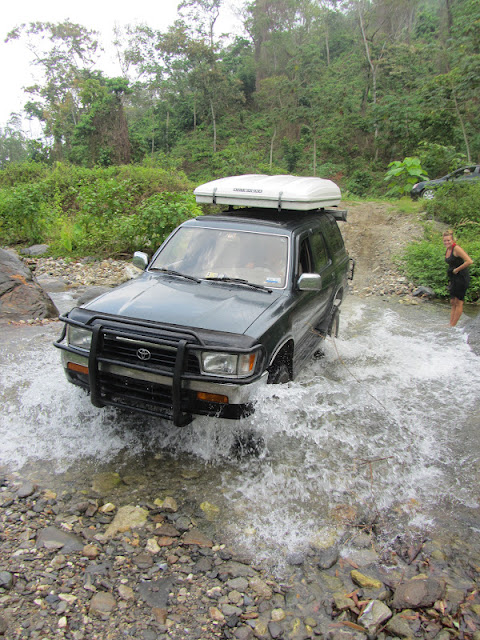 There was a $100 lempira entry fee and we hiked up the path along the river. 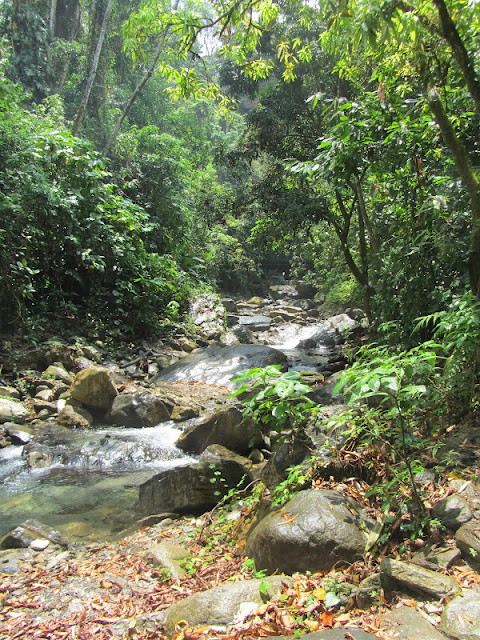 It was about a 15 minute hike.  Pretty…and straight uphill.  When we got there, we found tons of families picnicking and enjoying the holiday.  People had carried cases of beers, grills, coolers, babies, 5 gallon water bottles…they meant business. 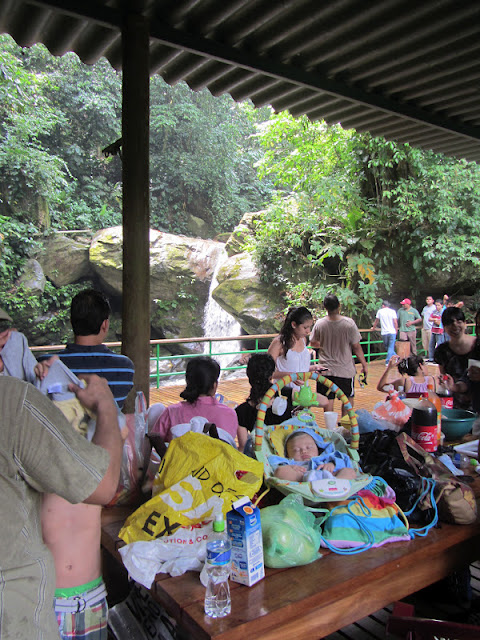 The water fall was perfect.  Honduras’ Caribbean coast has been incredibly hot.  Just 1/2 a mile up in the hills, the temperature is so much nicer. 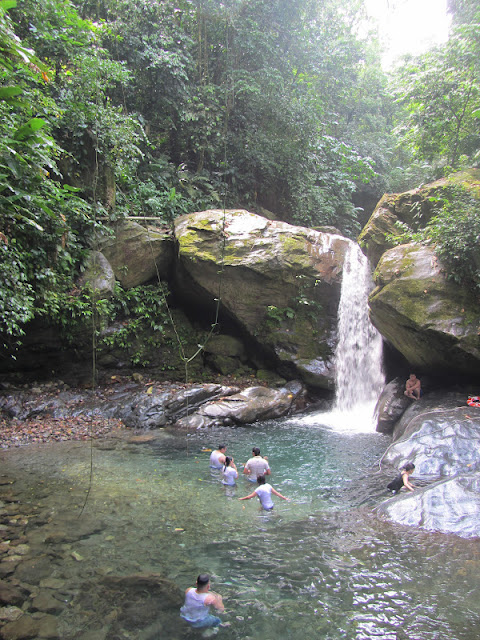 Dani and Cesar posing under the waterfall. 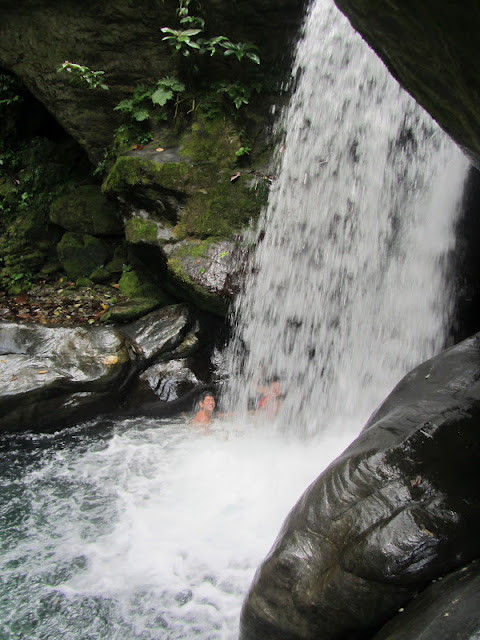 Back to Omoa for lunch.  The restaurants are famous for a soup with coconut milk and lots of seafood.  It was expensive…about $10usd but we all order it.

While waiting, a few local sales people stopped by.  One was Nixon, a young Garifuna boy with family in Dangriga, Belize, New York and Texas.  He was eager to practice English…but very shy about his pronouciation.  He was also selling Coconut bread for his mom… 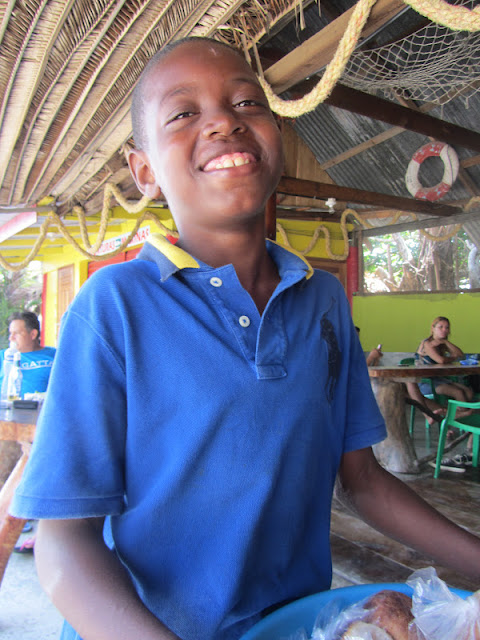 Then my friend Cesar hailed a ceviche saleman.  Cesar recognized the black clams and wanted to try a sample. 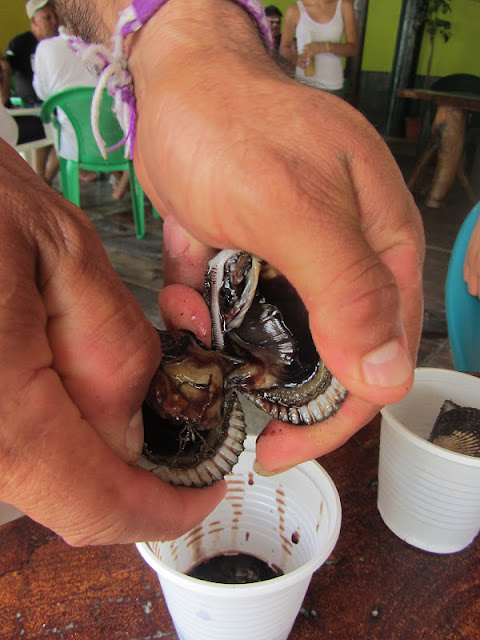 The ceviche (caracol as they called it) was delish.  But I noticed another bag with our salesman. 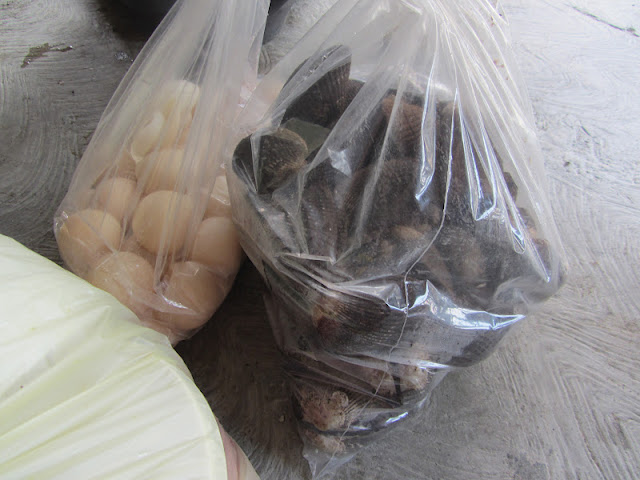 The darker item is the clams…but what are those eggs?  The guys explained it…sea turtle eggs.  For sea turtle egg ceviche.  Oh good grief.  Ick.

I tried to focus on my favorite Honduran beer, Barena. 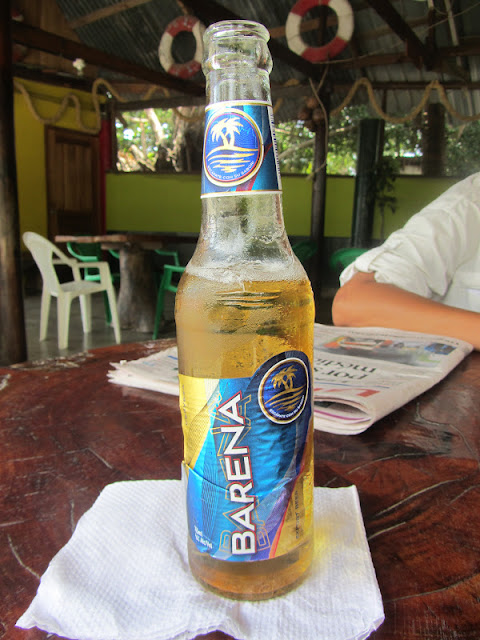 The soup arrived and it was so good.  Crab, shrimp, conch, whole fish…and of course, plantains come with EVERYTHING down here.  There was green plantain in the soup and fried yellow plantain chips on the side…you just can’t get enough. 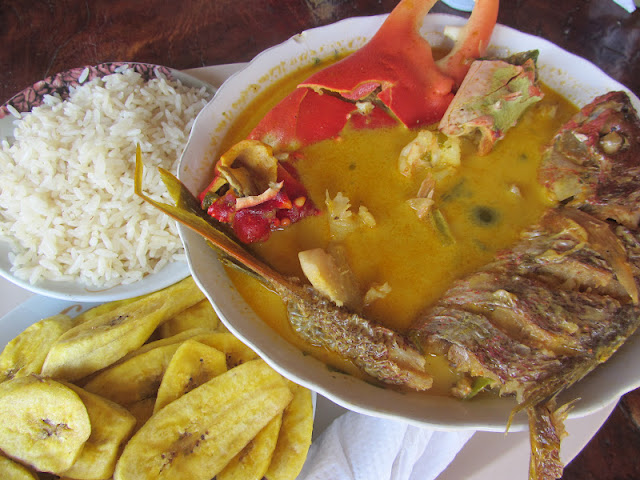 That soup knocked me out.  It was 10 meals in one.

Up early the next day to visit one of the oldest and biggest forts in Central America, the Fort at Omoa.  And then on to our next stop near Tela.

If you are curious about Omoa, they have a website:  Omoa.net.  Check it out…it’s a super interesting town.