Last night, Average Joe’s Bar hosted the monthly SAGA (the San Pedro Humane Society) cook-off.  Theme?  Bar food and snacks.  And it seems to have struck a cord with both chefs and eaters alike.  There was a great crowd and 15 dishes.  FIFTEEN!  That’s the most donated dishes I’ve ever seen.  For a donation of only $10bzd, attendees got a huge plate of food.  The 65 tickets sold out early but everyone loved the food.  (Or they appeared to be, I am trying to stick to my diet…I could have really blown it here!) 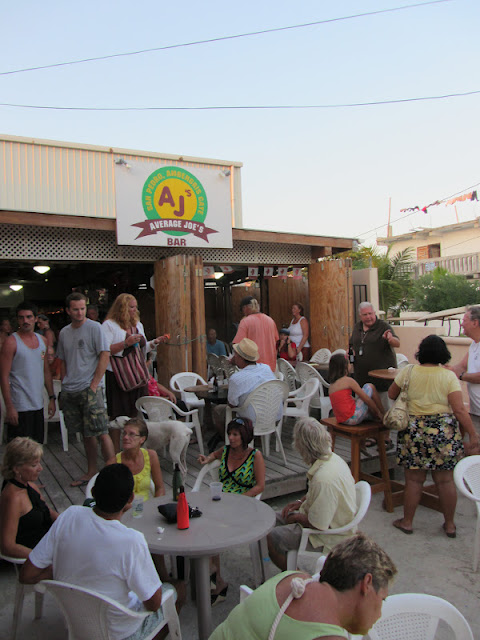 All the major bar food groups were represented…creamy, deep-fried, salty, sweet, sour creamy and cheesy.    And instead of eating it, I lovingly photographed it!

There was delicious looking sausage dip and fish spread, a few types of wings, 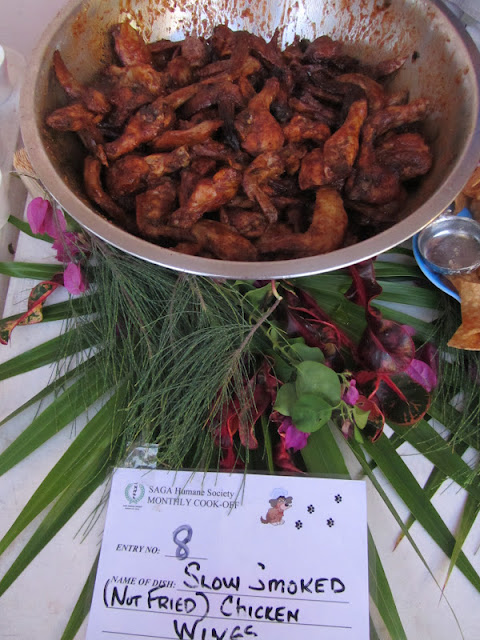 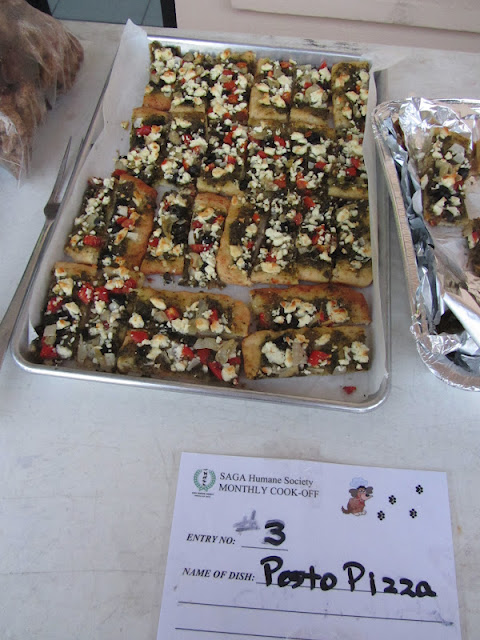 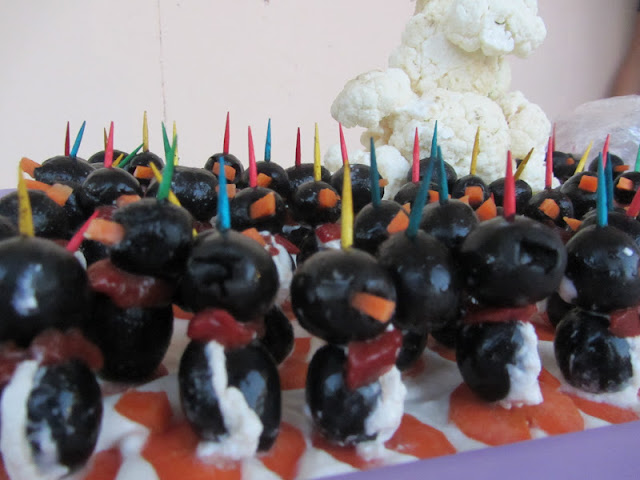 there were plantain balls (an Ecuadorian specialty)… 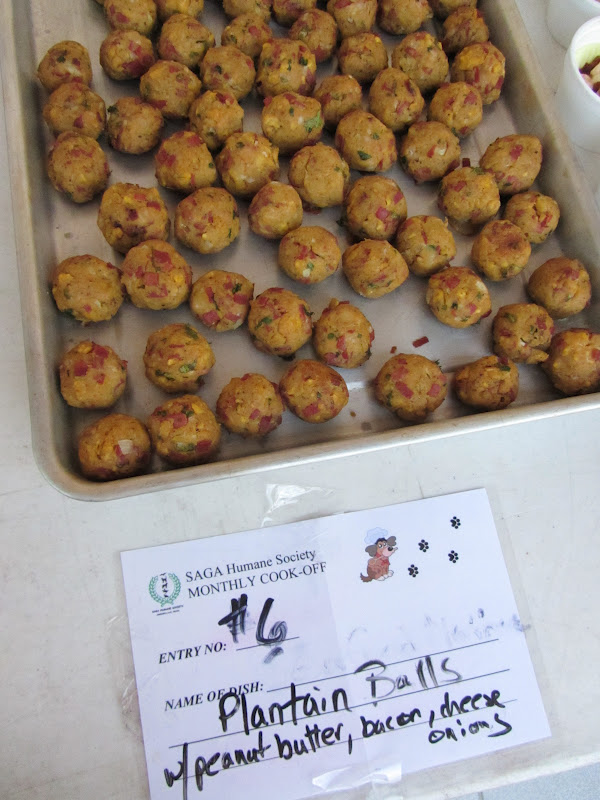 an artichoke and shrimp dip…so many choices.

The piece d’resistance was from the Palapa Bar.  Deep Fried Bacon with Maple Syrup and Chocolate Sauce.  This one I had to taste.  Like a bacony deep fried chocolate chip cookie.  DEEE VINE.  It might have made sense to have an ambulance parked outside.  You could see the glint of victory in Scott’s eyes. 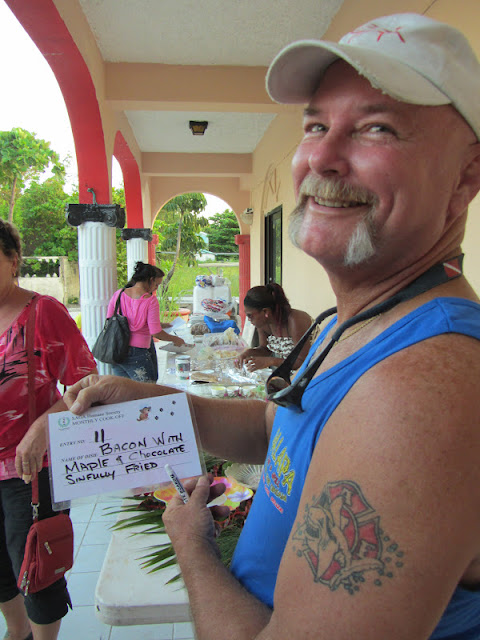 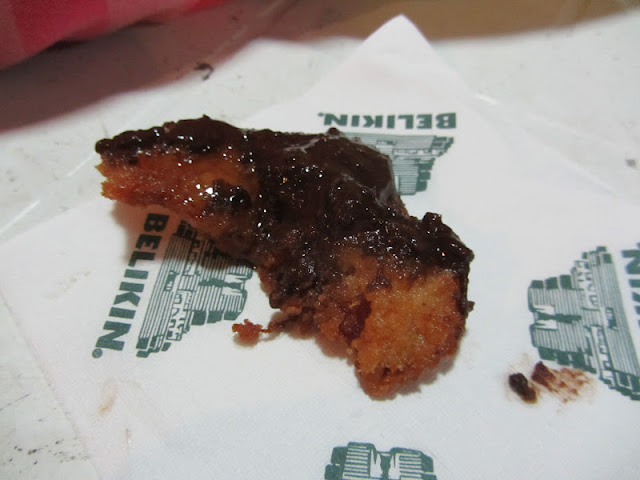 But at the heart of this cook-off was a deep rivalry between Mike from Average Joe’s and Scott from the Palapa Bar.  The smack talk started early.  Mike had two dishes in the back frying (the deep fried pickles and AJ’s famous Salt and Pepper Wings).  Since they were operating on home turf, I figured AJ’s would be the winners.  Without access to a deep fryer others had it tough…

But Palapa Bar brought their own kitchen!  A SAGA cook-off first.  A huge gas tank, a stove, oil and two cooks.  They also served four dishes…presented on flowers and with disco light flashing bowls.  No holds barred.  They made smoked chicken wings, sausage dip, smoked fish spread and the deep fried bacon. 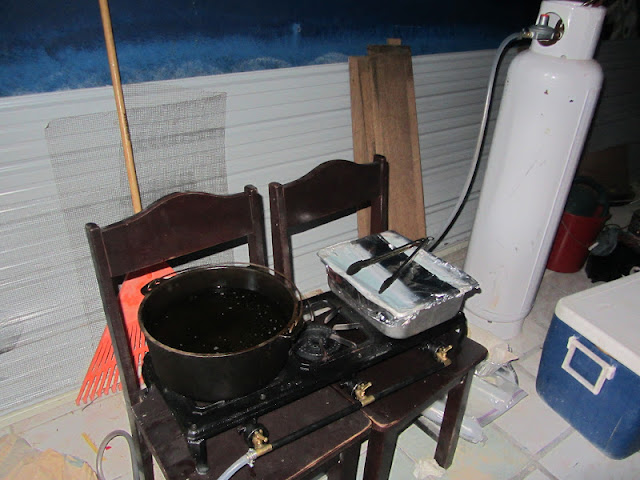 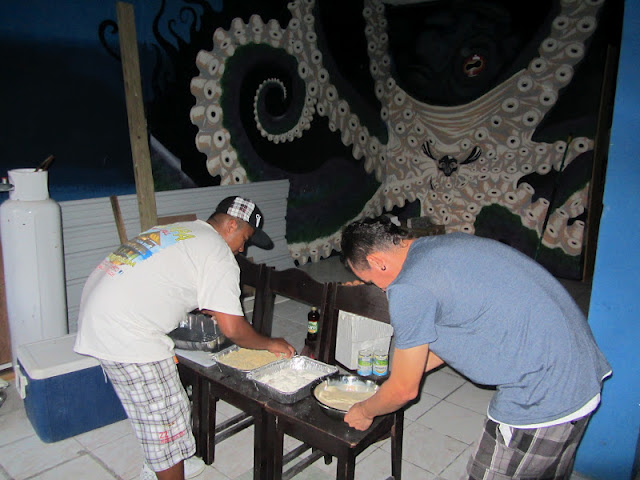 A great idea from SAGA…they had a table set up with t-shirts, calendar and the tickets for sale.  Looked like Bill was making lots of sales. 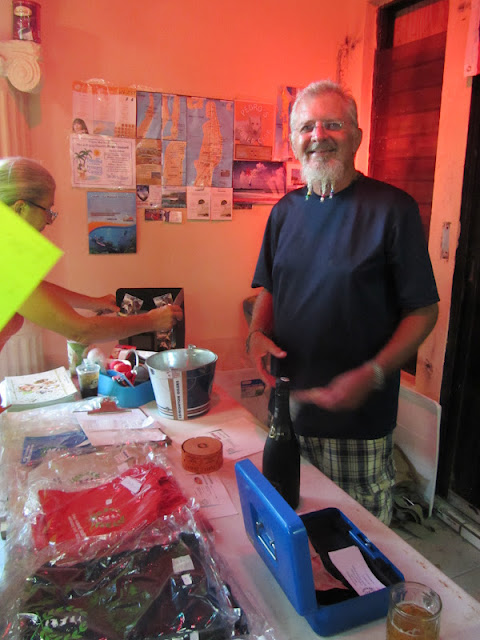 The crowd was getting restless!  Time to serve the food.  Betty and Eiden Salazar were waiting patiently…it was tough with all of the deep fryers going. 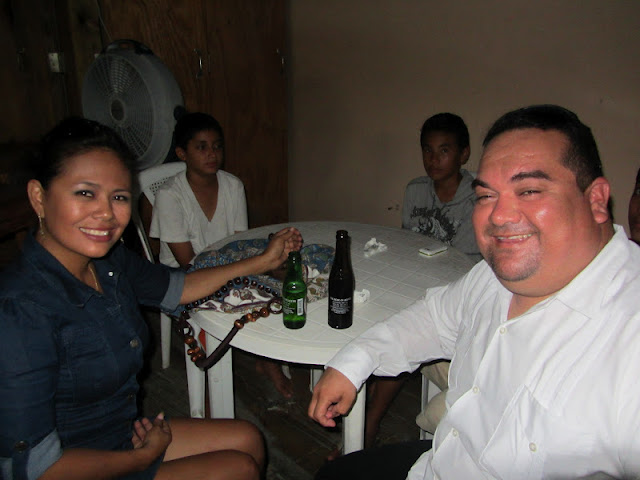 The line was long and winding… 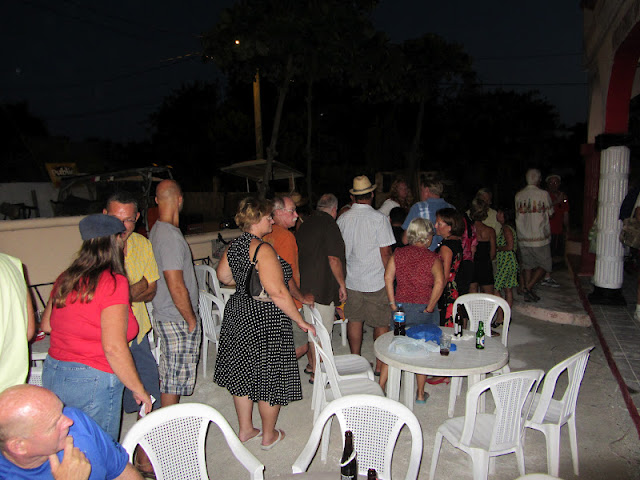 The serving plates were buckling under all of those calories… 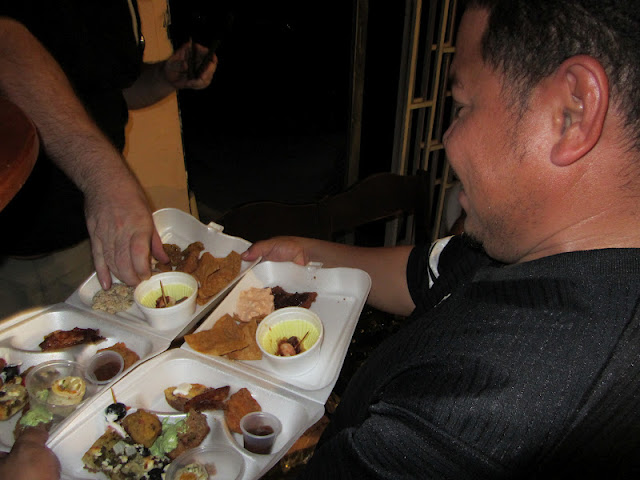 Everyone ate, drank and voted.  Awards were presented.  First to Kendra for travelling from Orange Walk for the event.  That’s a first… 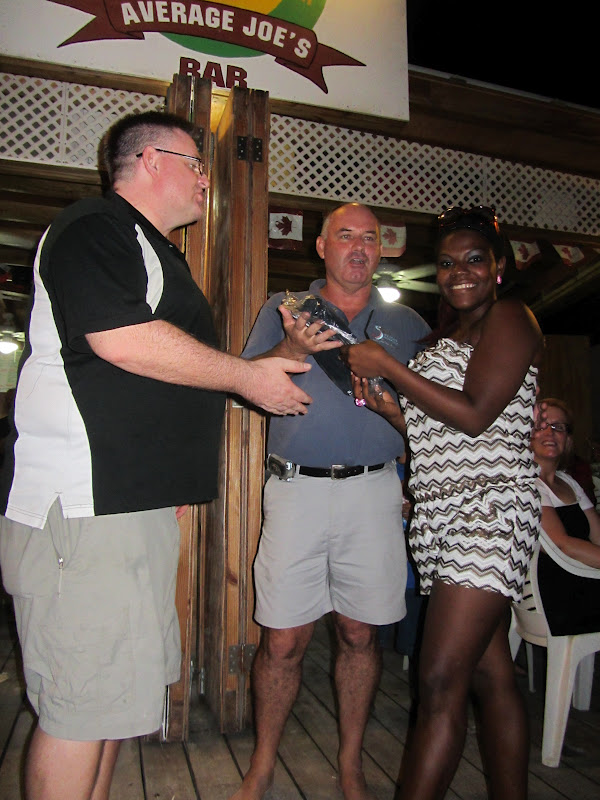 They then named the winning chefs…Third Place went to Letty Hernandez for a cheesy stuff potato. 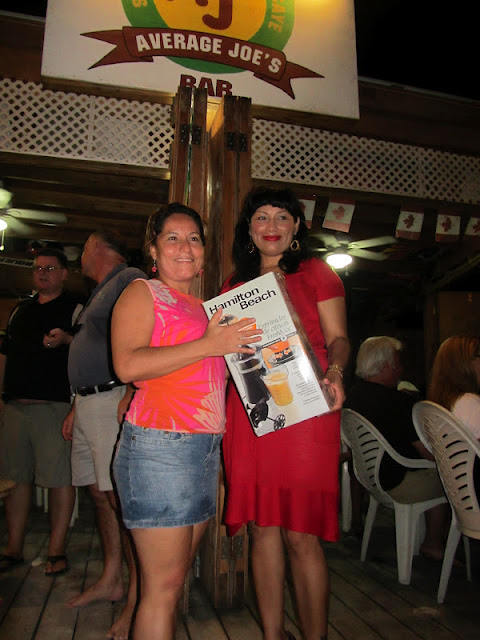 And first?  PALAPA BAR with the deep fried bacon.  Mike from Average Joe’s was a good sport and shook the champion’s hand. 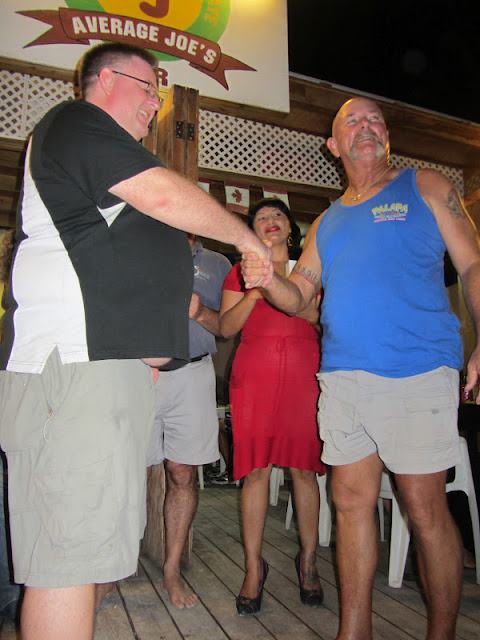 Victory to the Palapa Bar team (who has fried bacon on their every day menu!…I’m not sure if that is a good or a bad thing to know).  They accepted their prize on a new IPod Nano. 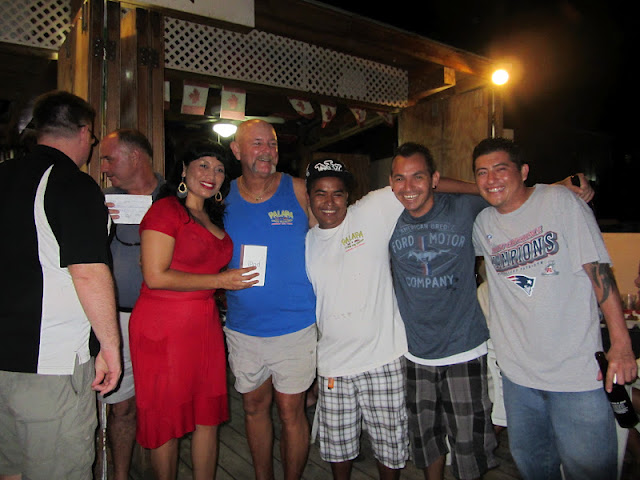 Congratulations guys and congratulations to everyone who cooked and attended.  A great crowd, a great cause and a great time.  Stayed tuned for the next cook-off in June!