When Danny Guerrero was elected Mayor of San Pedro in March, he promised more visibility, being more available to the public.  On that, he has delivered.  He is already becoming a regular on my favorite TV show, “Good Morning, San Pedro”.  Also my favorite morning show song…take a listen:  GMSP Intro.   Super catchy, don’t you think?The mayor was allotted just 30 minutes to discuss a wide range of topics (too little Reef TV!).  Here’s my brief summary:

1.   The Streets:  Always a huge source of contention when the rainy season begins, all talk in town has turned to the weather and the bad state of the roads.  The Mayor and his counsel are well aware of the situation in San Pedrito, DFC, San Mateo, up north and Boca del Rio…basically all areas with sand and dirt roads.  He assures us that there is a plan and that most of it cannot be enacted until the rain stops (not for a few more days).  Rather than do a full overhaul of the streets (which is impossible for many reasons at this time), the plan is to create a sidewalk.  Full details were not discussed…but I’ll take it!  It will be nice to walk to my local market and not be covered in mud.

Here is the sky right now: 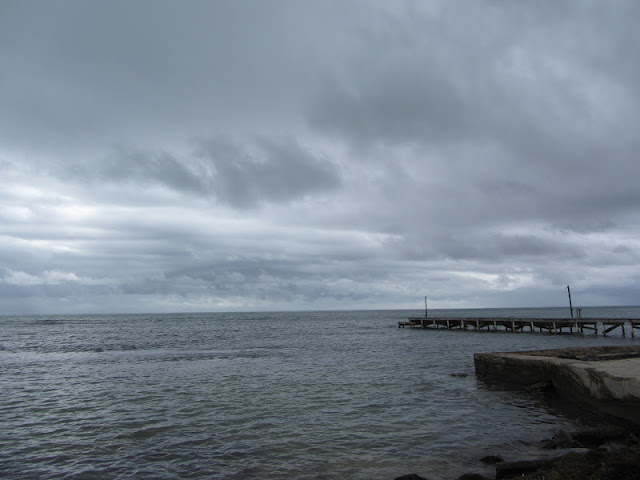 2.  Educating On & Enforcing the Dog Laws:   There are too many stray dogs on the island.  I’m guessing that most of us can agree on that.  They also mentioned that the raccoon population is bigger than we’ve seen in years.  The near term plan (over next few months) is to license all pet dogs.  There will be a dog catcher that will collect stray or troublesome dogs…your dog will be returned to you for a fee.  Strays will be spayed and neutered or euthanized if they are in bad shape.  DOG OWNERS HAVE RESPONSIBILITIES.  Keep your dog on a leash, clean up after your dog.  Danny correctly stated we are “no longer La Isla Bonita if we have all this crap all over the street!”

A fee structure will be in place…mainly fines for your dog being picked up by the town.  Ultimately, the town council would like to find a way to prevent people from breeding dogs on the mainland and bringing them to San Pedro.   For all of these changes, they plan to work closely with SAGA and the SP Animal Hospital.

3.  Mosquito Spraying:  During the campaign, the mayor promised spraying for mosquitoes early and often.  When he took office he found that the Health Department is in charge of the spraying schedule.  Good news:  there is a new spraying machine on the island (bringing us to two) and more foggers on the way.  Once the rains have stopped, the heavy spraying will take place.

Other things mentioned:  please drill a hole in your trash drum so that it can drain of water.  Also try to keep the drum to a reasonable weight.  The town trash collectors have one of the hardest jobs on the island.  Let’s try to help them out!

The major insists that he wants to hear from you if you have issues, good or bad.  His office’s number is:  226-2198.  Perhaps I’ll give him a call and nominate myself for official town blogger.

3 thoughts on “The Mayor Talks About Dogs, The Streets & Mosquitos On Today’s Morning Show”