Home » Belize Travel Blog » Island Fun » Lobsterfest 2012: Pedro’s Inn Brings Them Out For All You Can Eat Lobster Pizza

Last night, Pedro’s Inn hosted its now famous, 7th annual all-you-can-eat lobsterfest event.  For $25bzd, you could stuff yourself with all of the lobster pizza (and assorted other flavors) that you wanted for about 3 hours.  You are not going to get lobster cheaper than this.  I did my best to take advantage.

Walter modelled the Belikin LobsterFest t-shirt…it’s very cute.  On the back is a large logo from Belikin’s Bowen and Bowen.  I’m going to have to pick one of these up as well as the Official San Pedro Lobsterfest shirt.  That one goes on sale Friday afternoon and Saturday during the block party. 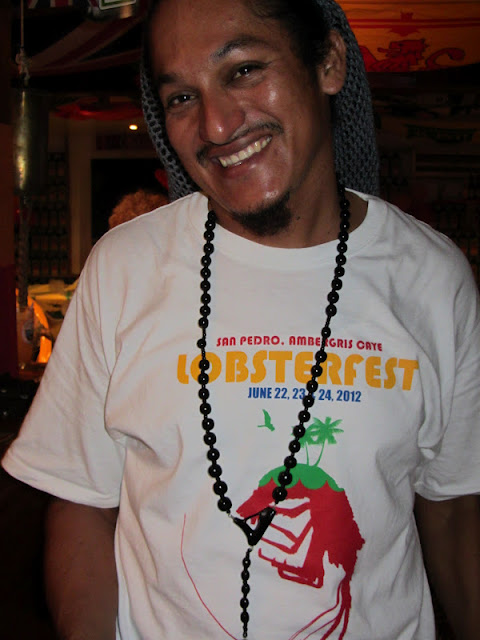 If you don’t know Walter, check him out in:  Meet One of the Hardest Working Guys I Know.   He is a great guy.

Here’s the lobster pizza in all of it’s glory. 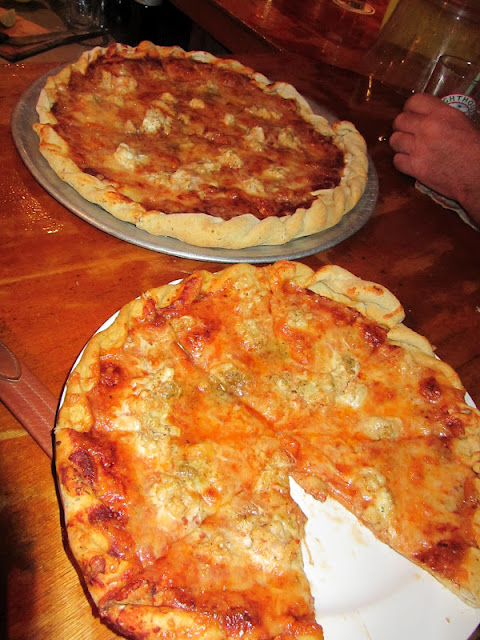 Our lobster queen Christine Syme made an appearance to meet and greet her many fans. 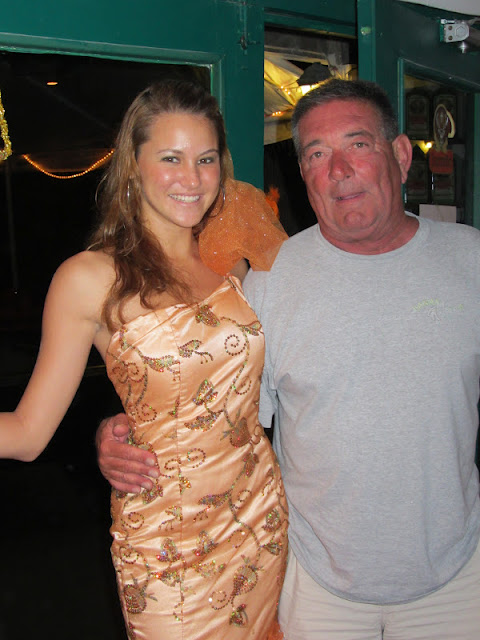 And later in the night, the dress mysteriously switched to Melody…and she posed with my friend (and co-worker from my very first job) Reggie. 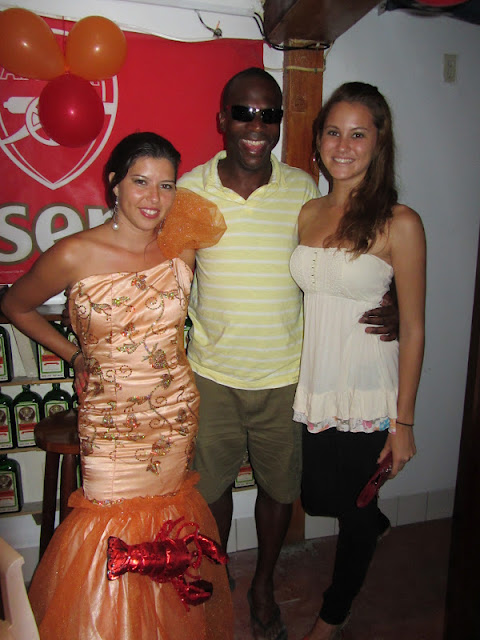 Melody is a San Pedrana who owns a very cute art store, Belizean Melody Art (that sells her art as well as a mix of other stuff) on Front Street.  She is also one of the more creative advertisers in town.
Tee hee. 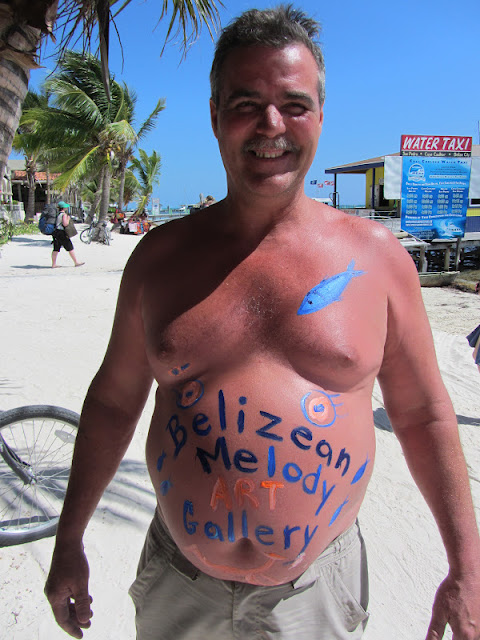 Gino and his band, the Shackshakers (aka Derrick and Drummer Dan), were playing outside…and there was a small crowd out there but not a ton…not only was it HOT but by about 8pm-ish, it started raining.  AGAIN RAIN!  ENOUGH!  Too bad they couldn’t fit inside, close to where I was…parked directly under the air conditioner drinking draft beers from frosted glasses. 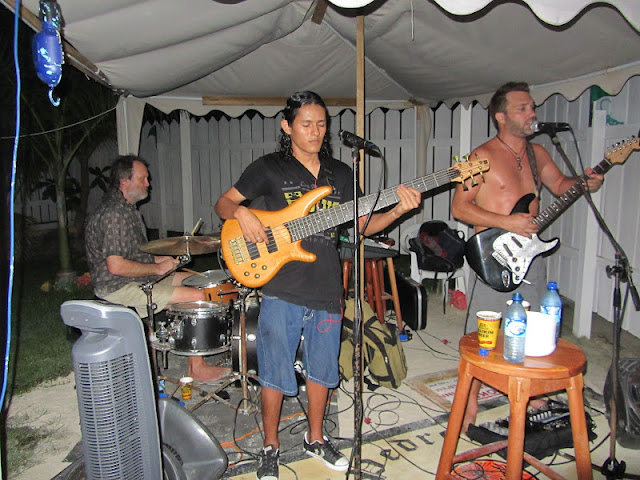 A poker tournament started in the back room.  They had two full tables.  $80USD buy-in was too rich for my blood. 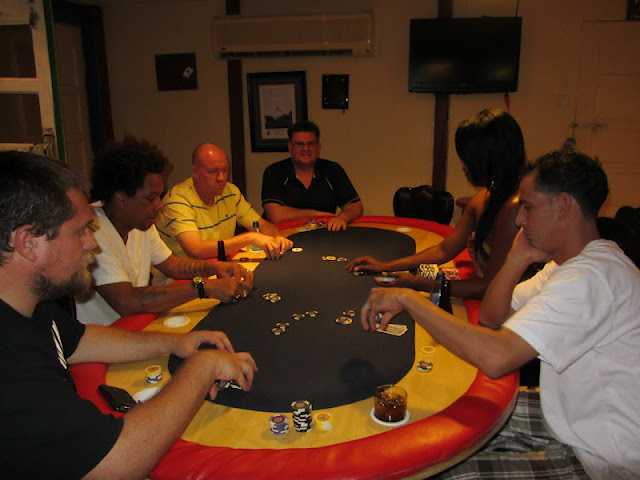 The pizza eating crowd was big… 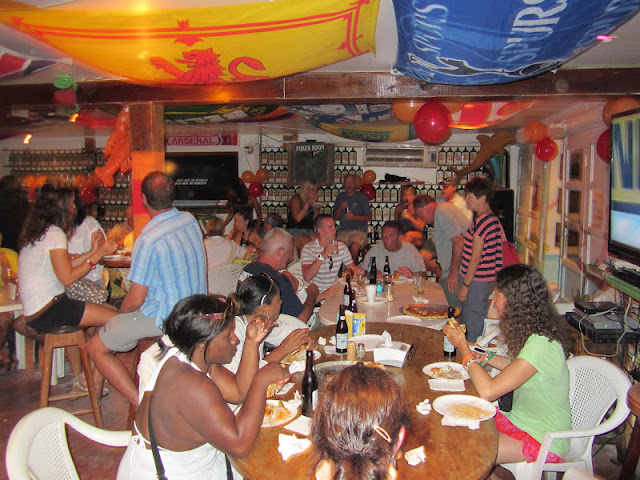 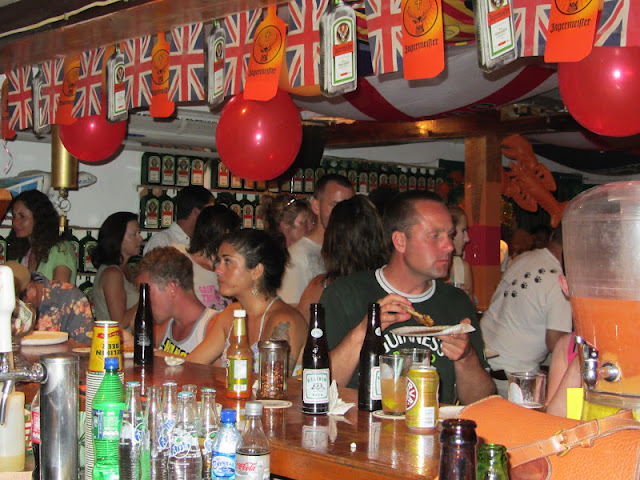 And Peter, the owner of the bar and hotel, unbelievably continues to drink water rather than his usual standard of Lighthouse and Jaegermeisters.  He took on a no-alcohol challenge.  One month to raise money for the San Pedro Animal Hospital.  Many have bet against him. 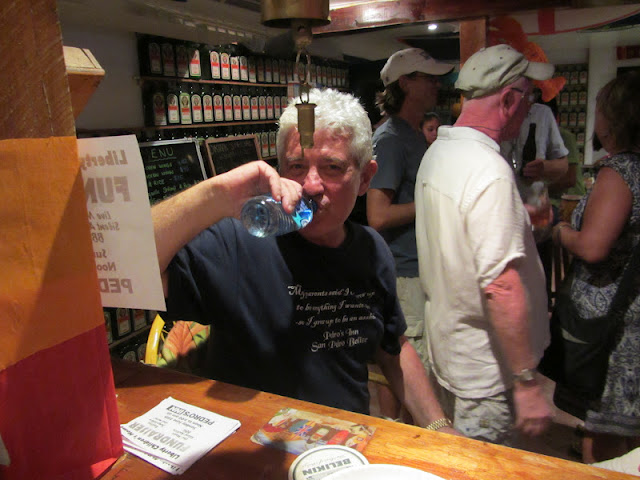 Honestly?  I prefer him after a few drinks.

Happy 2012 LobsterFest to all!  There are still lots and lots of events ahead.

What I was posting about one year ago:   San Pedro Traffic Department, Really? and 2011 Lobsterfest: Lobster Luau at Mojito Bar