Last night was the big event.  San Pedro’s Lobsterfest has been rocking all week from June 15th to June 23rd.  There have been parties, music, dancing, tons of eating and drinking and just good times.  But, as always, the last Saturday night is the big one, the Lobsterfest Block Party.  Restaurants from all over town and charities of all kinds set up boothes and served their finest lobster dishes and cocktails. 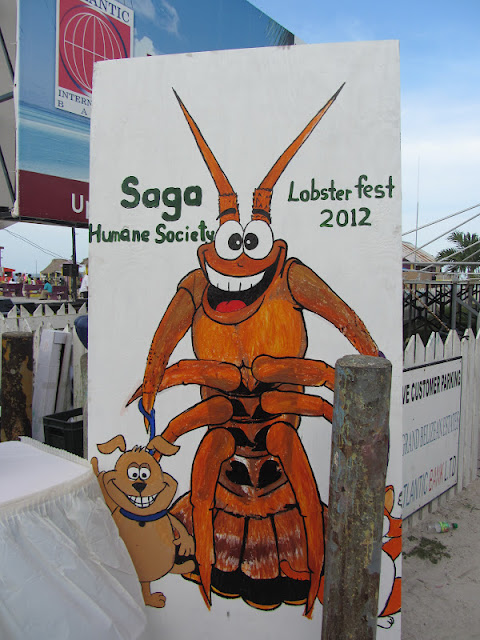 And guess who got to help choose the best dishes and drinks?  SanPedroScoop!  How lucky am I?  Some seem to appreciate that I have expertise in many, many fields.  Eating and drinking are my specialties. 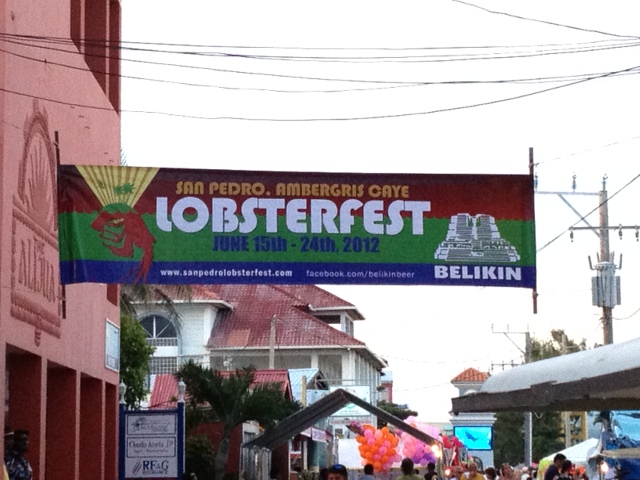 I arrived early while groups were still setting up to take a few pictures. 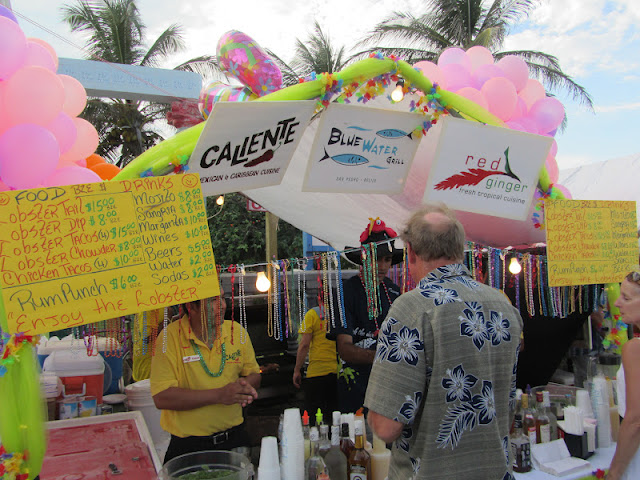 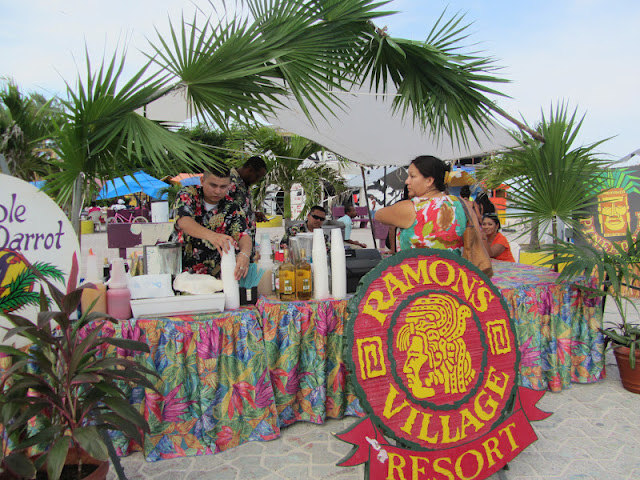 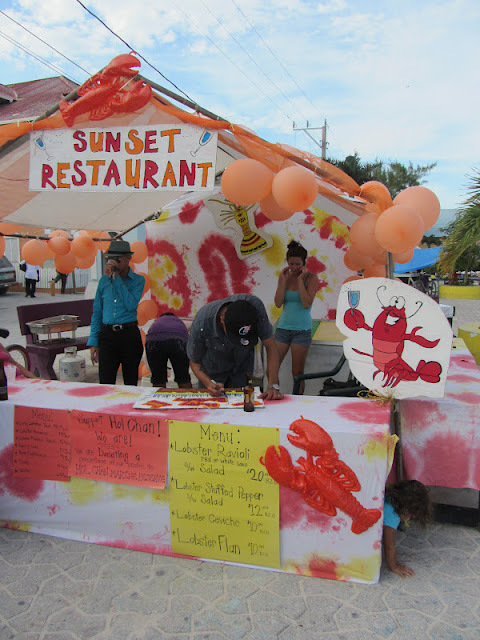 The very cute official Lobsterfest t-shirt.  It can be yours for $25bzd.  Great souvenir. 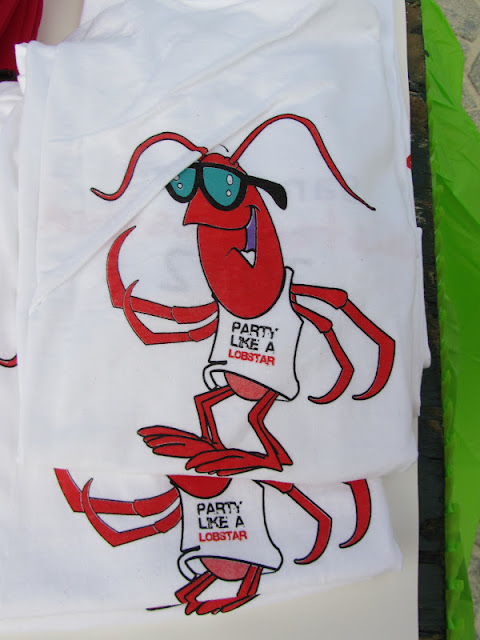 I knew the key to success at this event is getting there early for food.  The lines tend to get long as the night goes on.  I could smell the butter coming from the Casa Picasso booth. 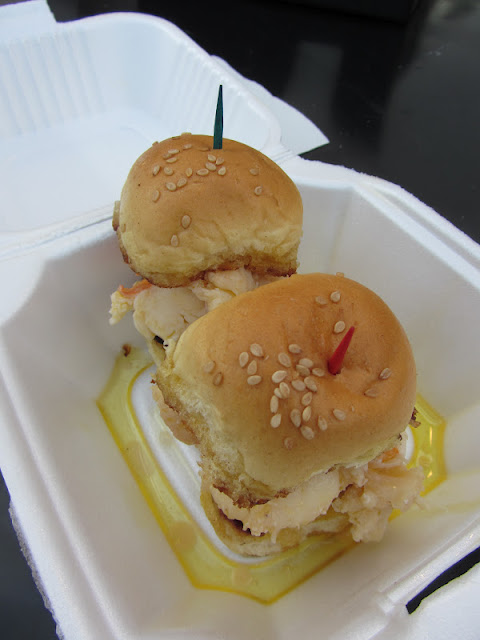 If you are a fan of butter and lobster, this is your dish:  Lobster Sliders.  I scarfed them down along with a very tasty cranberry and limoncello cocktail.  Two minutes later was asked to be an offical food and cocktail judge.  Why OH WHY did I eat?

But everyone has their burden to bear so I had a seat with some of the other judges.  (Kenrick from the town council and Jorge from the San Pedro Sun newspaper.) 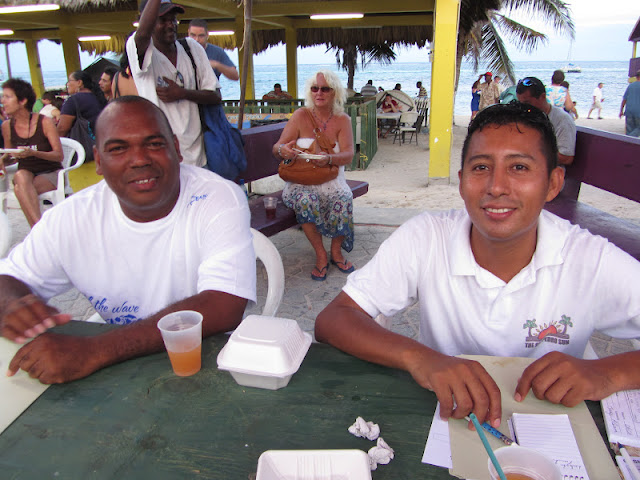 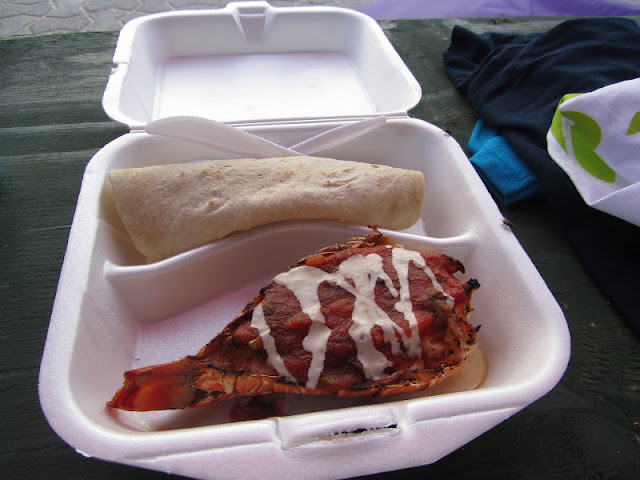 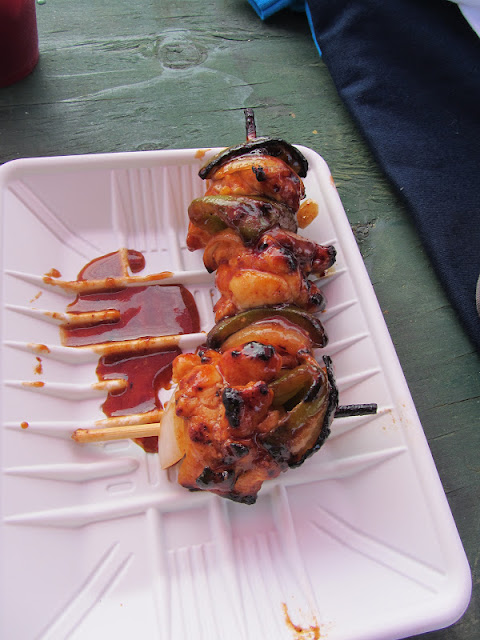 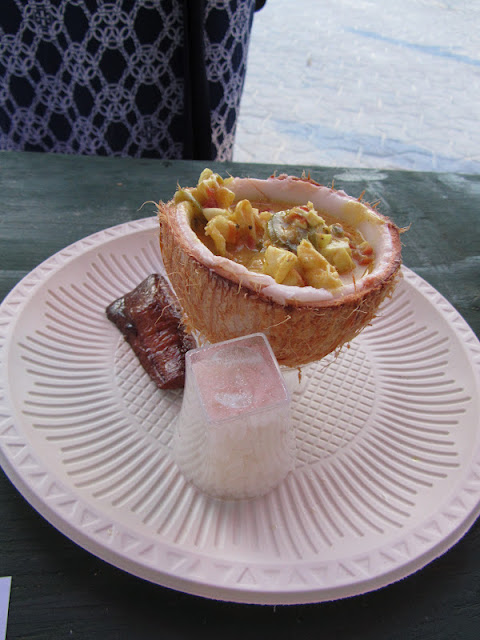 I know you are already feeling sorry for me but it didn’t stop there.  There were 8 cocktails to try.  A few sangrias, some rum punches, a Bailey’s colada and the winner…an over-the-top creamy Caye Lime Martini.  God this thing was good and won Best Cocktail of Lobsterfest.  Nice work Caliente’s Restaurant.  I am hoping this is on the dessert menu! 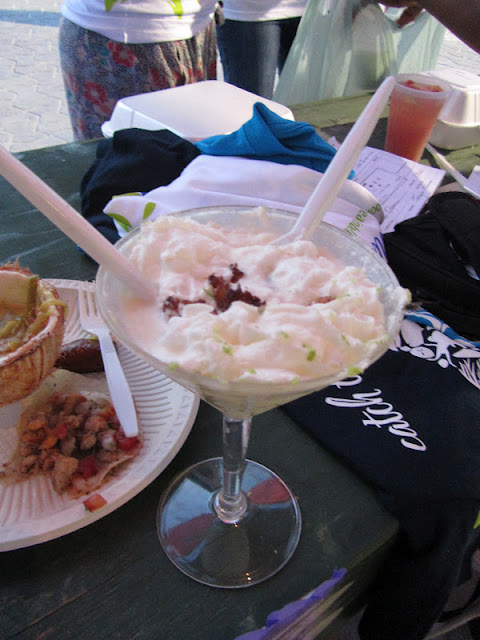 My favorite part of the whole week was the Panerrifix teen steel drum band from Belmopan’s Our Lady of Guadalupe RC School.  They were the first musical act up for the evening and they were SO good.   And playing some very unexpected tunes…

When’s the last time you heard a steel drum band transitioning from reggae to Rihanna and Akon?  These kids were fantastic. 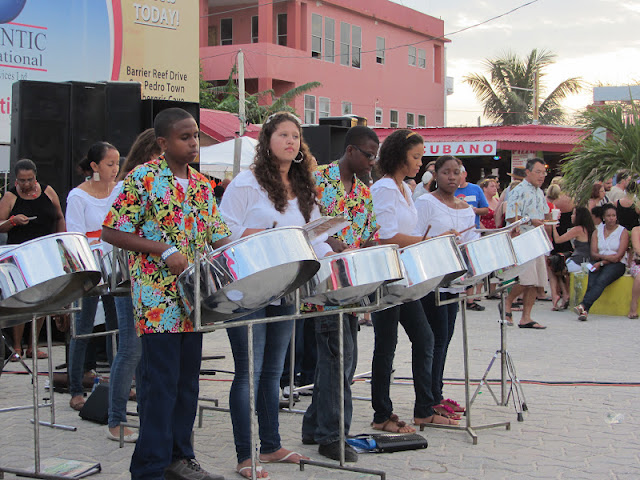 The park was really packed as the night went on…

Guys were spinning candy floss (I just wanted to say “candy floss”…I love that they use the Brit term for cotton candy down here. ) 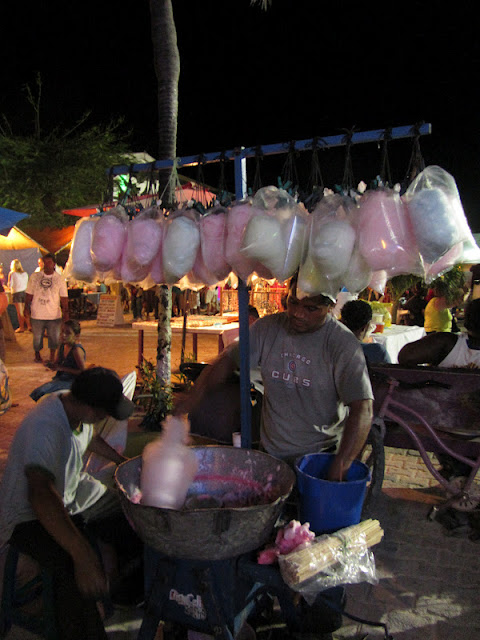 Others were dressed for the special occasion… 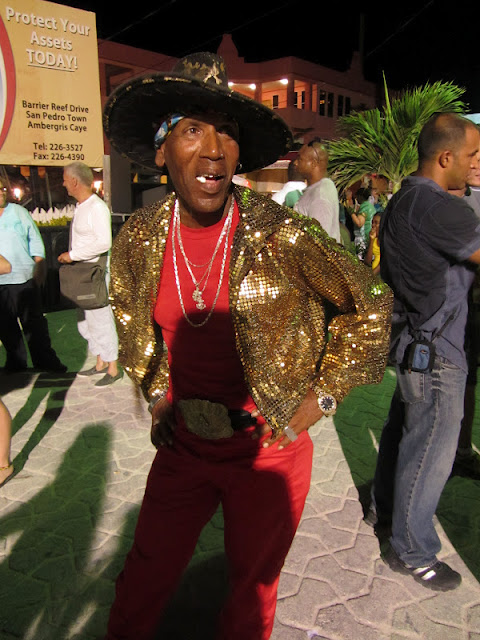 This incredibly lucky family won the Lobsterfest raffle.  By getting their passports stamped at each event they attended during the week, they were chosen for the grand prize.  A week vacation package for 2 with hotel stays, drinks, restaurants, tours to Hol Chan and Lamanai.  Lucky ducks.  We’ll see you back soon! 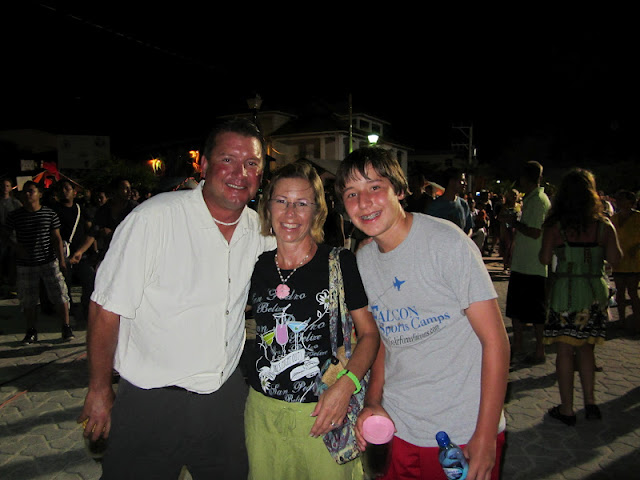 Gino and the Shack Shakers were up next and got the whole crowd dancing. 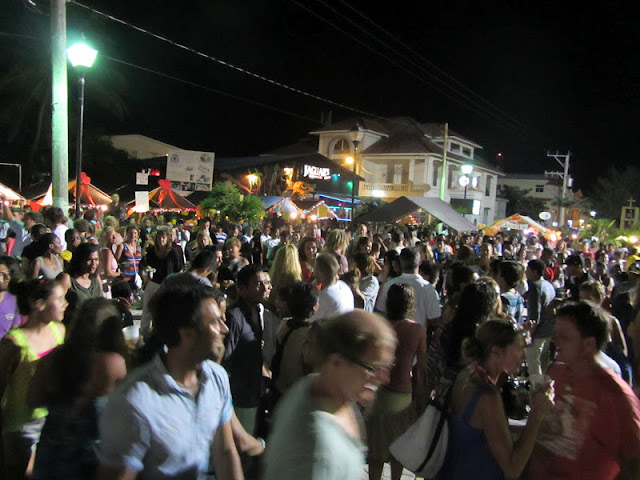 And they didn’t stop when the FANTASTIC Garifuna Collective started playing.  Belizean music at its very best. 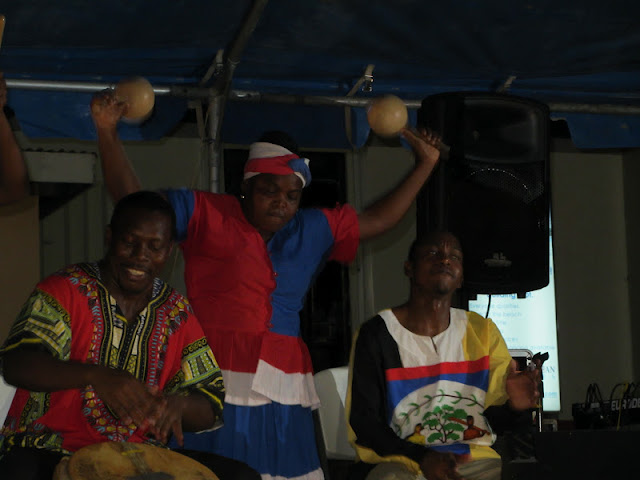 What a great night…and the rain held off until about 11:30pm.  Lots of tourists and local families out with their kids for the night.  Perfection.  I will see all of you at Caye Caulker Lobsterfest next weekend, and if you can’t make it to that, DEFINITELY at 2013 San Pedro Belize Lobsterfest.  Remember, lobster season in Belize lasts from June 15 to February 15th.

What was I writing about one year ago today?   Wade the Gringo Gives McD’s A Run for Their Money at Roadkill Bar and 2011 Lobsterfest Party at Pedro’s Inn.

2 thoughts on “The Culmination of a Busy Week: The San Pedro Lobsterfest 2012 Block Party”