Yesterday I was a bit nervous.  After dieting for seven weeks with rigor and perseverance that would impress most Olympic athletes,  I was headed to south Ambergris Caye to visit Kakaw Chocolate factory.  And when I returned? 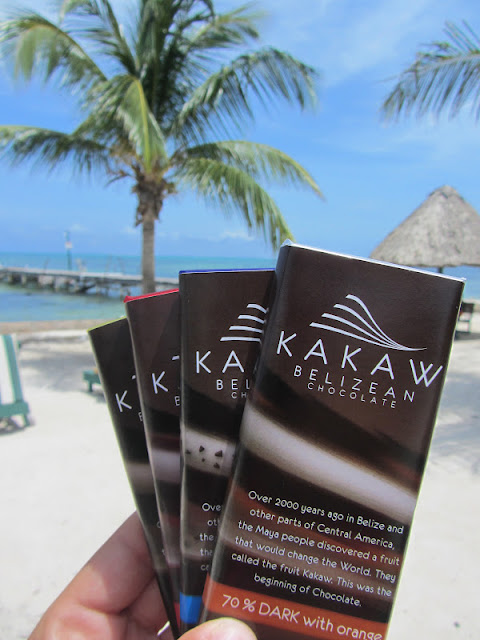 Belize has a long history of chocolate production.  In fact, we may boast the longest in the world.   Everyone’s favorite flavor was actually first used by the Mayan and Aztec peoples thousands of years ago…some speculate as an ale of sorts made with the ground beans and the pulp that surrounds them. 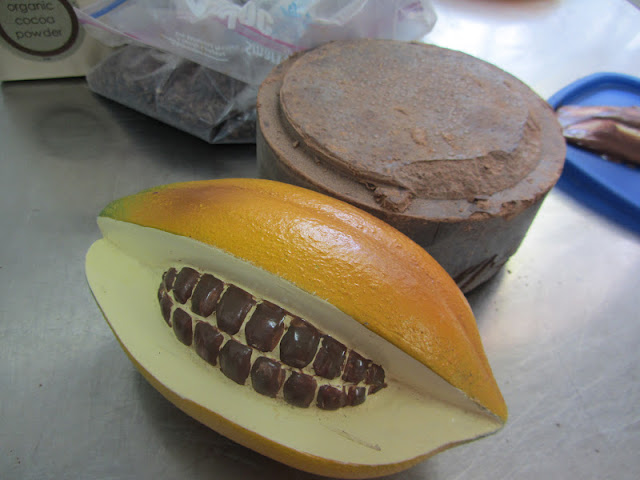 Belizean chocolate has come a long way since being served as a bitter beer.  In much more modern times, mega-producer Hershey’s Chocolate had a facility in Belize in the 1970s and 80s but left for cheaper production elsewhere.  (Kakaw actually has one of the old Hershey’s presses left in a garage in Southern Belize.  Taller than me and weighing hundreds and hundreds of pounds, this machine is a beast!  I shiver to think about how they actually got it to the island.) 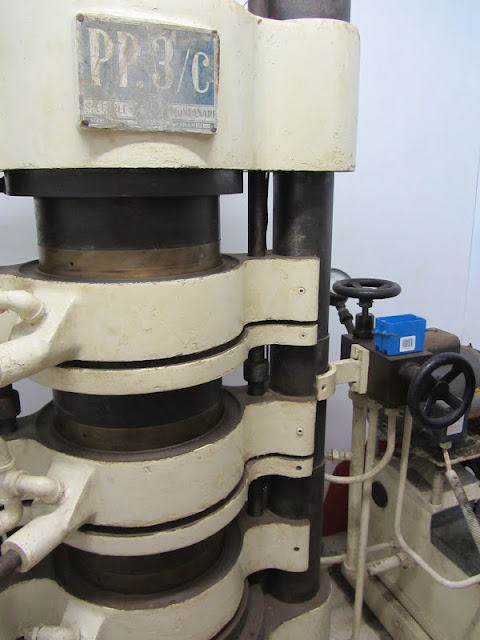 But is that chocolate produced in small batches in Belize with 100% Belizean beans?  Is each bar hand numbered to show you it’s freshness and authenticity?   No.  Not even close.

So, yesterday I visited Jo and Chris, the owners of Kakaw Chocolate (they couldn’t be nicer or more down-to-earth people).  The couple moved to San Pedro over 12 years ago and in 2007, after being inspired by the first Belize Cacao Festival, brought chocolate production to their home on the beach…slowly.  Working for a while in their home kitchen, they now have a small factory in the yard behind their house.  Chocolate and the Caribbean Sea?  They were destined for greatness. 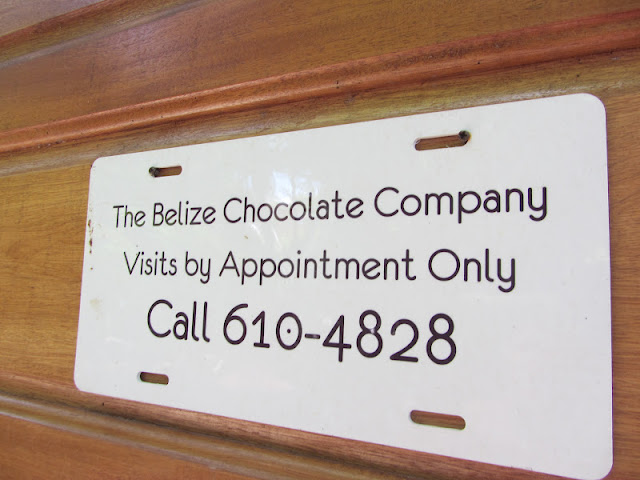 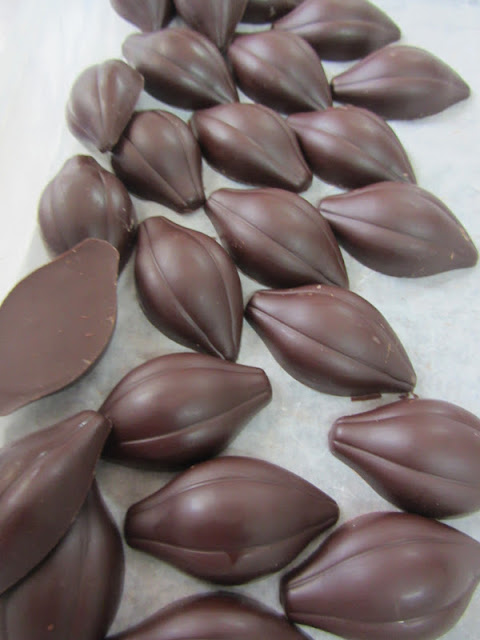 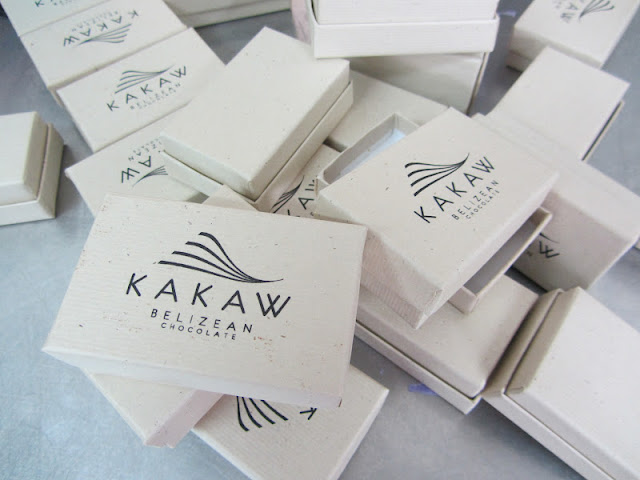 but how are they making this stuff?

Well…you need to start with the beans.  The cacao is grown and harvested in Southern Belize.  Over 1000 organic growers in the area producing up to 50 tons of beans per year form the Toledo Cacao Growers Association.  Pretty cool.

Once chosen by Jo and Chris and shipped to San Pedro, they are roasted in small batches, crushed and then ground and ground and ground for 2 days to form a glistening liquor.  Two days!  But something needed to be done, the dried, unroasted bean is actually quite bitter. 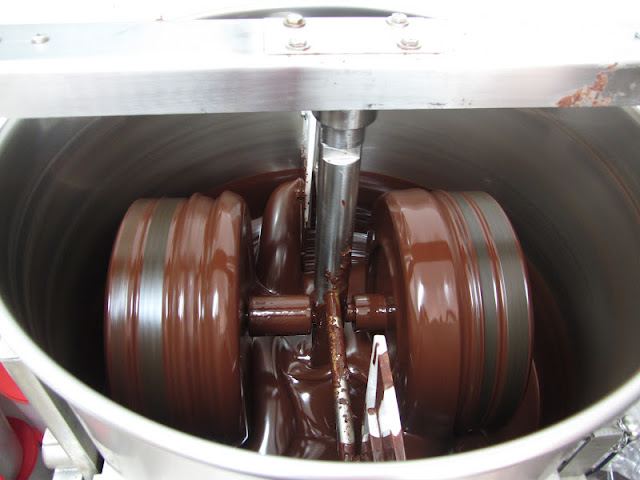 If it wasn’t for those spinning, crushing gears, I would have jumped right in.

Next, some of the liquor is pushed with lots of pressure through a very fine sieve to separate the cocoa powder… 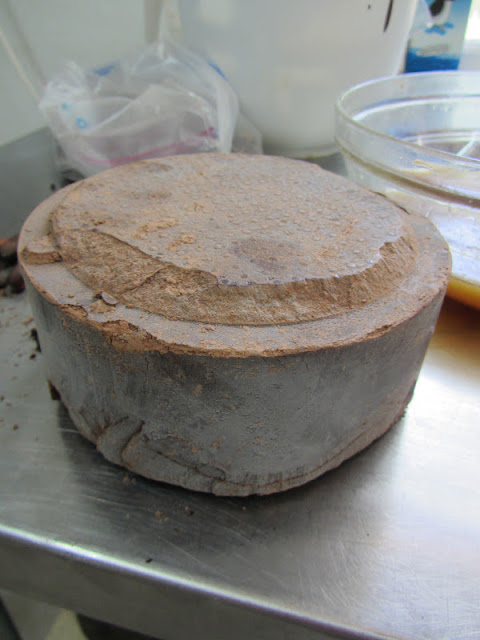 and the cocoa butter.  Almost like a caramel colored oil.  The butter is then added along with sugar and milk solids back to the liquor (in very specific proportions) to make the chocolate luscious and…well…delicious.

After tempering (something to do with raising the temperature and then cooling it…or maybe the other way around), you can add additional flavorings.  Kakaw makes dark chocolate, dark chocolate with nibs (the nutty little roasted bean bits), orange and chili flavors.

Look how cute they package up.  Now THAT is a great souvenir. 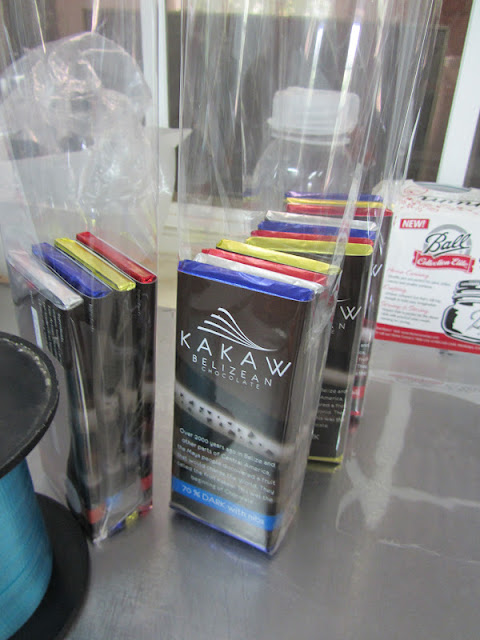 They also make “Wangla” or dark chocolate with sesame seed bars and ginger, mango, pineapple, guava, mint and other seasonal flavors…you can just imagine the possibilities.

And stay tuned.  Jo and Chris are working on exciting new developments so that their chocolate is even more widely available in San Pedro in even more forms.  (I’m waiting for the bath and body collection.  I want to smell like their facilities always.) 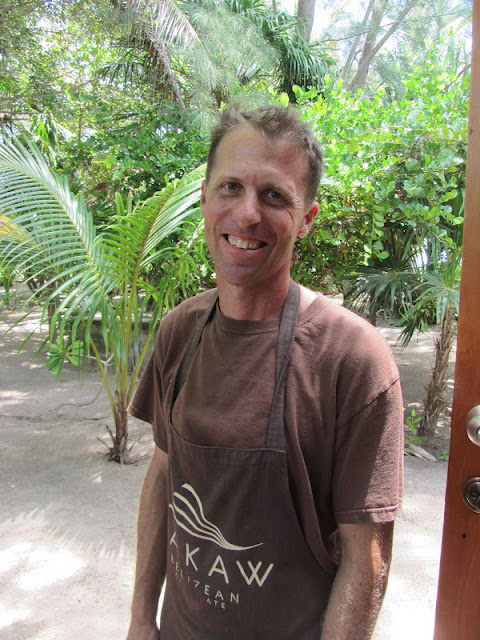 Now you can find the full line of their products from the bars to the cocoa nibs and cocoa powder at the Greenhouse and Wine De Vine.  And the bars at various shops around town as well as the International Airport.  One or ten chocolate bars is a great way to spend your leftover Belizean currency.  And you won’t be buying the bars only because they are Belizean but because they are absolutely delicious.

If you haven’t already, check out their very catchy website that (very graphically) tells you their personal chocolate story and gives the information so you too can plan a visit.  It also kinda makes you want to leave a big city corporate job and move to Belize.  (OH shucks…I already did that.)  But after this chocolaty visit, I’m starting to think that good chocolate and lots of it might be the key to true happiness.

And P.S., I did not go chocolate “end your diet” bananas…a few nibbles of delicious dark chocolate here or there certainly isn’t going to kill me.  It’s even a super food!   In fact, so far it is making me very very happy.

4 thoughts on “100% Made In San Pedro, Belize: Delicious Kakaw Chocolates”